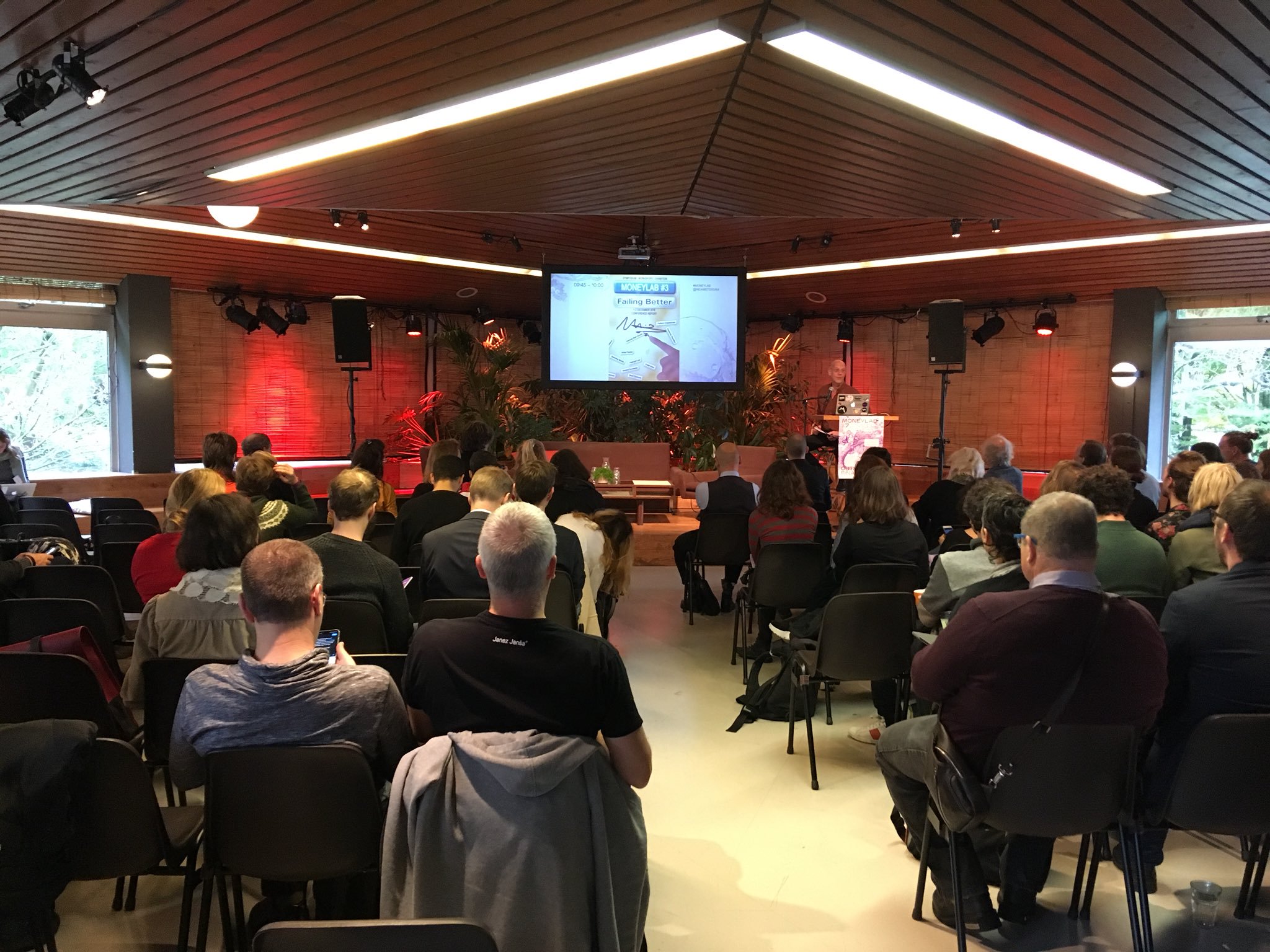 Last week I attended the MoneyLab, now at its seventh iteration and dedicated to “feminist economics, social payments, corporate crime and the ‘blokechain’”. Some years have passed since I took part in this cycle of conferences, and I’m glad to see that there is both continuity (I recognized some familiar faces) and transformation (many new ones as well).

As it often happens with INC conferences, the program was quite diverse, not to say eclectic, and yet surprisingly coherent: I learned that stable coins (such as Tether) are not so stable after all (Thomas Bollen); that Futurist agitator Filippo Tommaso Marinetti authored a sort of steampunk novel that was deemed obscene at the time and colonialist today (Ana Teixeira Pinto); that “digital cash” means many different and sometimes contradicting things (Brett Scott); that crypto-people use shaky biological analogies to motivate their actions (Andy Morales Coto); that Malta is a hub for offshore finance with churches being used for that purpose (RYBN); that cryptocurrencies disintermediate ransomware concentrating the costs of frauds into individuals instead of intermediaries who have more power to take action against it (Josephine Wolff), that neoliberalism = financial libertarianism + political illiberism, aka capitalism – democracy (Reijer Pieter Hendrikse).

In this post I would like to quickly take note of two personal highlights. The first one was the talk by Lana Swartz, author of Paid: Tales of Dongles, Checks, and Other Money Stuff. Swartz was invited to take part in a panel dedicated to Libra, Facebook’s recent attempt to enter the financial sector with its own currency. Her main point was that lot of energy went into discussing and criticizing something that might not exist: Libra was more than anything a bunch of conversations, tweets and news divided between celebrating the upcoming revolution or decrying the imminent dystopia. The main question then becomes: how is Libra real? Does the fact that might never come into being as a technology make it less real? After all, it affected the present. In this sense, Libra can be seen as a way to set foot in the technological future. Actual implementation is secondary.

Apparently, this is a thing in the cryptoworld, best exemplified by that form of speculative sci-fi that is the whitepaper genre. Some people might call this ‘hyperstition’, some other ‘hauntology’ but the problem remains: how to deal with claims on the future? Swartz spoke of the necessity to understand the messy temporalities of crypto-technologies and initiatives. She encouraged other researchers to go beyond the schadenfreude for the seemingly failed Libra project. Quoting JK Gibson-Graham, she remarked that giving too much importance to Libra is a way to endow it with a power that it might not have.

Now, I’m not particularly interested in Facebook’s experiments with currencies but I find Swartz’s reflections on the unstable reality of platforms’ initiatives, technologies and patent generally applicable and useful. I think of Amazon’s patent that might never be exploited; of the critical design workshop given at Google that resulted in a creepy video entitled The Selfish Ledger; of the massive schadenfreude targeted at WeWork IPO, and by looking into the recent past the list could grow: for instance, what happened to LinkedIn’s “Economic Graph”?

The issue at stake is how to deal with what could be defined “platform realism” along the lines of Fisher’s capitalist realism. The problems I see are the following: 1) relentless platform updates that prevent grounded analysis; 2) inability to distinguish implementation from statements; 3) lack of methods and theoretical tools to trace the implications of techno-intertexts or what Greg Urban calls metaculture (patents, ads, etc).

My second highlight is Antonia Hernández’s talk, entitled “A token is a token is a token: financial discrimination on a sexcam platform”. Hernández’s investigation is focused on Chaturbate, a website for cam performers, that are primarily women in their 20s. Chaturbate is big: we speak of millions of visitors per day. The only way for the performers to be paid is to encourage viewers to tip, a practice that is also called “crowdfucking”. Viewers get different badges based on their tips and in some cases they can maneuver teledildos with them. I assume that the tipping is a way for the platform to avoid dealing with any kind of labor relationship by characterizing this labor as user-generated content. The distribution of viewers per performers on Chaturbate didn’t surprise me: there is a very tiny portion of performers with a huge number of viewers, while the vast majority of them has only a bunch of viewers. This takes the typical long tail shape popularized by Chris Anderson.

Hernández spoke about the complexities of the tipping mechanism, that takes place through a platform-specific virtual currency. On a basic level things look easy: 100 tokens mean 10.99$ for a viewer and 5$ for a performer. However, things become more complex when we look deeper. For instance, while viewers can pay with seamlessly with credit card or systems like Sofort, performers can only rely on checks or wire transfers with a fixed amount that can be cashed in every two weeks. Moreover, there have been cases, like in the Philippines, in which Chaturbate have suddenly and dramatically decreased the change value of the tokens.

What we see here is what seems to be a defining feature of gig economy platforms: their “bifrontism”, to paraphrase German researcher Florian A. Schmidt. Platform bifrontism occurs when a platform develops two distinct and even conflicting narratives, one directed at sellers and one at buyers. Fiverr does it, MightyAI does it, Chaturbate does it.

Antonia Hernández’s research is also related to her art project called Maintenance Pornography which explores Chaturbate’s networked domesticity by placing the perfomances in a miniature house. I’m very fond of the work and plan to dig deeper into it.

If you enjoyed this text, make sure to check the book I just published with Onomatopee: Entreprecariat – Everyone is an Entrepreneur. Nobody Is Safe.