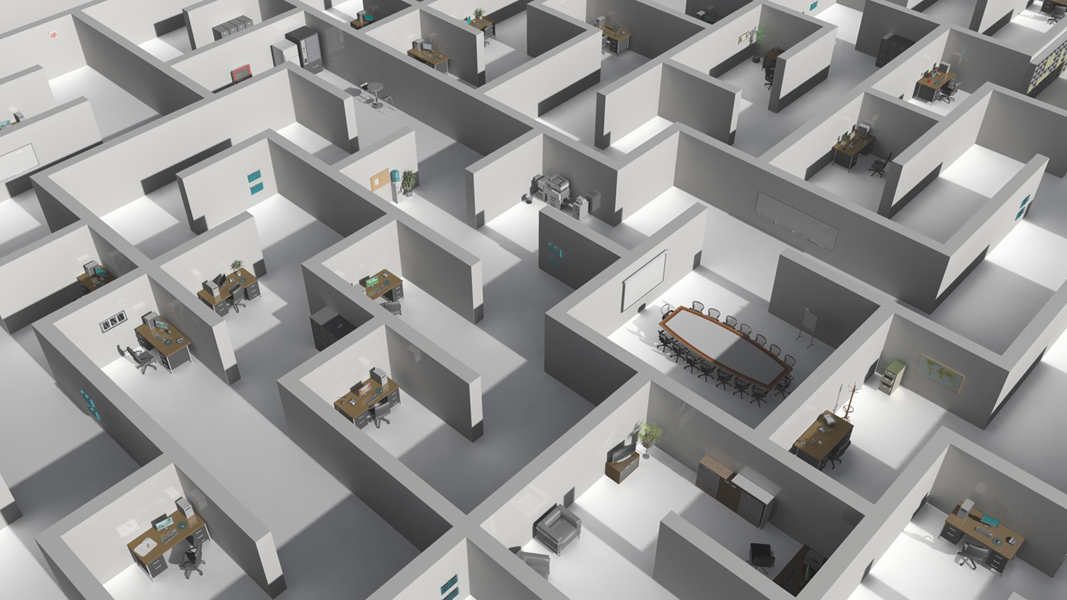 The use of mobile phone testifies the way in which cognitive work has slipped out its canonical environment –the office– to become an uninterrupted presence in our lives. Work that exists both as actuality (the email we’re replying to) and as potentiality (the red badge notifying that there are still emails to read). Clearly, there have been some antecedents, such as the laptop and, before that, the desktop computer. Even with the telephone, work outside the office was possible. However, the mobile phone represents a qualitative shift since it radicalizes the mobility and ubiquity of work.

Not only digital devices have brought work in our homes, bags and pockets, but they have also multiplied the types of work that we do: we do marketing and PR for ourselves and for our products, we administer our weekly or monthly schedule, we set meetings, reset passwords, and so on. After all this peripheral work, our actual job can begin. We’re hyperemployed, as Ian Bogost puts it.

The French Socialist Party has recently attempted to fight the "digital burnout" caused by overtime work and exacerbated by peripheral work. The main idea is to grant workers the right not to access their company’s email address after the official working hours. Socialist MP Benoit Hamon maintains that "employees physically leave the office, but they do not leave their work. They remain attached by a kind of electronic leash – like a dog." Although a positive conversation starter about digital work, the "right to disconnect" law doesn’t take into account the fact that contemporary workers do work overtime, often willingly but also inevitably, as peripheral work is almost unescapable. Since work is now both internalized and generalized, any kind of regulation that is not anticipated by a cultural shift is doomed to fail.

Work has crossed several boundaries: the spatial one (where we work), the professional one (the kind of work we do), and finally the imperative one (who demands this work). For the time being, I would like to focus on the spatial dimension and ask: how does the use of digital devices shape the space around nomadic workers? In which ways are cafes, hotel rooms, means of transportations, libraries converted into informal spaces of work? How do laptops, tablets and smartphones determine the way we inhabit them? Do these code/spaces, as Rob Kitchin and Martin Dodge call them, serve the same functions offered by the office? During the 1960s, Mario Tronti noticed that the factory was spilling out into the city. Nowadays, the factory society is turning into an office society.

An obvious consideration comes to mind: informal work spaces are suppliers in the first place. They offer the main utilities needed by the nomadic cognitive worker: electricity and internet connection. Go to a café and you will see people scanning the blackboards in search of the wifi password. Walk through an airport and you will meet passengers connected to the power grid through the umbilical cord of their chargers. 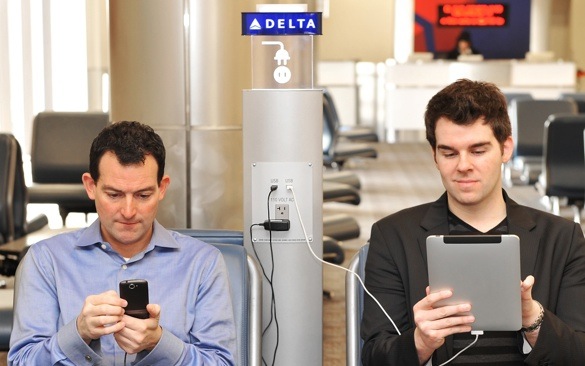 "Is That an Office In Your Pocket?", asks Micha Kaufman, CEO of the Fiverr. For now, the answer seems to be "no". The idea that a single digital device is enough to carry out any possible task is still delusional: laptops, tablets, e-readers and smartphones coexist (not to speak of blocknotes, printed books, pens, pencils, etc). Because of this multiplicity, workers are particularly careful when they have to choose the equipment to carry devices, peripherals and other instruments. 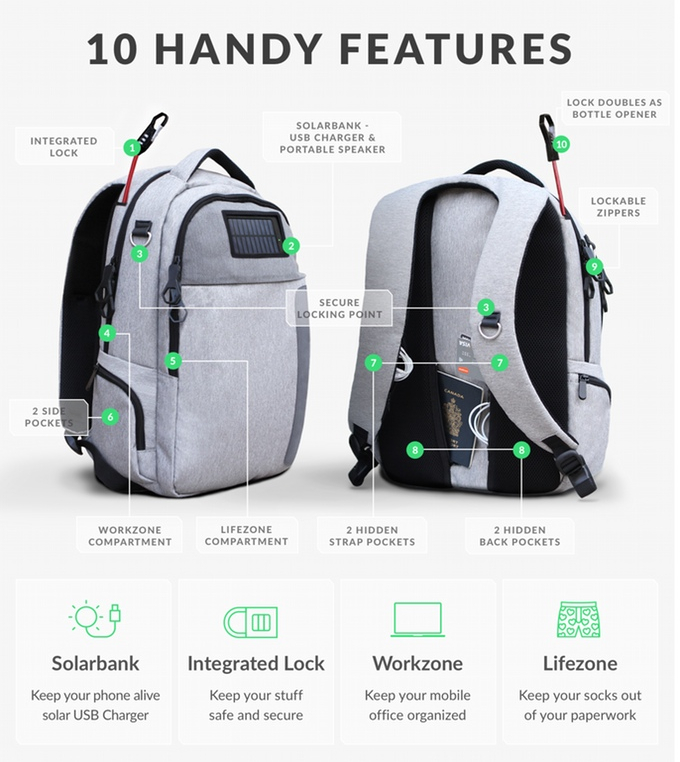 This is why there are several crowdfunding campaigns promoting the ultimate backpack for work and life, like SOLO, both water resistant and compliant to carry-on baggage regulations, thanks to which you’ll "travel happier and be more productive". Or Lifepack, which is solar powered, divided into a "workzone" and a "lifezone" and provided with bluetooth speakers. Its creators claim to have "re-invented the mobile office". Lifepack’s crowdfunding goal was $20.000, in the end it raised more than $600.000. Apparently, the primary extension of the nomadic digital worker is not the device, but the backpack. 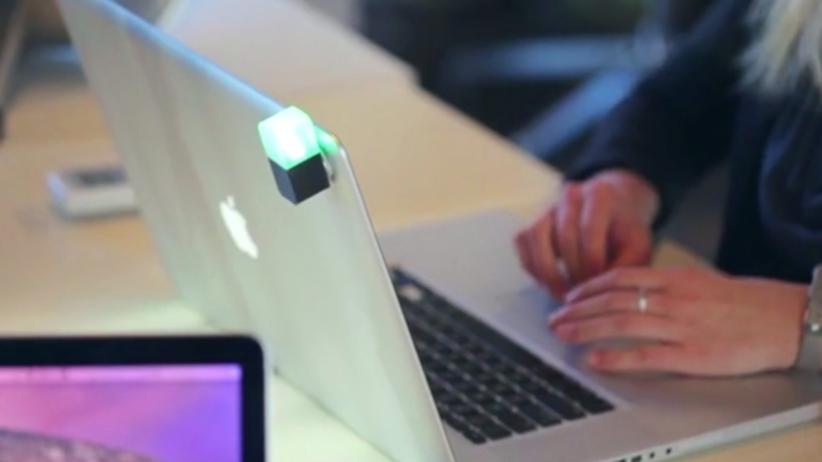 The spaces we inhabit have a relational component: they affect, and are in turn affected, by the people who experience them and by their interactions. Our devices do the same: digital technology is creating new social rituals related, among other things, to the notion of busyness (caveat: this is not to say that "all this technology is making us antisocial"). Busyness is even codified into specialized devices, like a traffic light that turns red when someone is busy. However, even without this light indicator, one can convey the same message by simply wearing headphones, that perhaps aren’t emitting any sound. 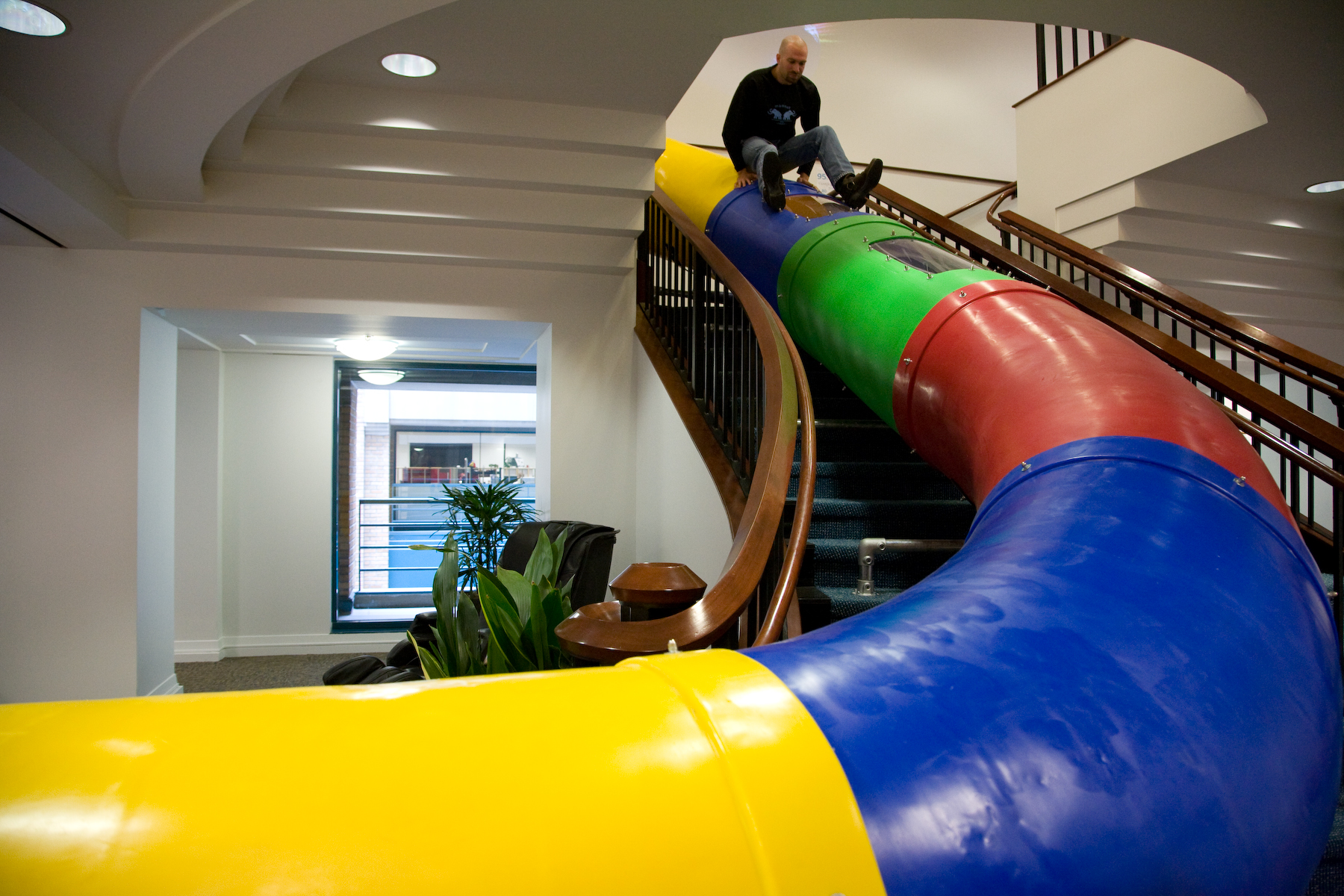 The actual office is in turn morphing into an amusement park. It increasingly incorporates facilities for relaxation, entertainment and sociability: take a nap in the pod, call your wife from the private conversation room, play table tennis with your colleagues, have a Mohito at the free bar before going home. In the days of Tronti, the faith in the advent of a soon-to-be "leisure society" was common. This prediction turned out to be somehow correct: some of us live in a leisure society, but one in which leisure has been subsumed by work. Independent workers and freelancers who long for these social functions are welcome to rent a spot in coworking spaces, often filled with propaganda about sharing ideas and having fun while working. In one of these, I once saw a missile (or was it a submarine?) with a big label saying "everybody must like everybody".

Certain routines like lunch break are semi-rigidly regulated by the office. Generally speaking, office life is split into a series of diverse periods of time, it has interruptions. On the contrary, work performed within the digital environment is uniform, seamless. So, the administration of time carried out by the employer is now delegated to apps. Although, there is a difference, both in tone and intimacy: apps now tell us to drink water, to go to sleep or to stand up every 15 minutes. By adopting an informal, friendly language, they resemble a nanny or a mom, rather than a supervisor. 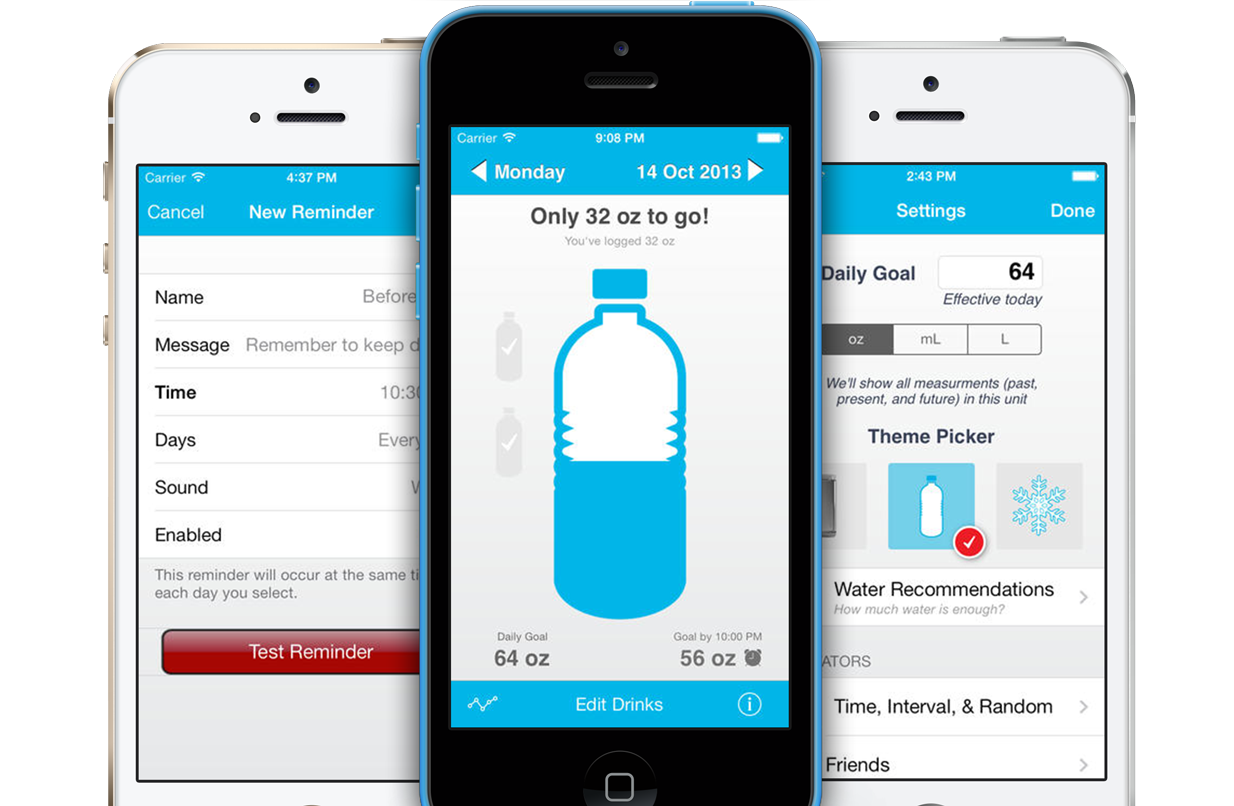 While the office is continously present throughout the city and within the computer, no genuine continuity is granted to the worker, no reliable routine, no control: damn, the cafè is full today and the wifi password just changed… Hey wait, why was my favorite spot replaced with these uncomfortable stools? The zones inhabited by the nomadic worker are temporary but not autonomous. We briefly squat them for energy, connection and the faint feeling of being part of a social group. Like urban sherpas, we carry our devices with us, devices meant to empower us. But if we think of the endless quest for a plug, it looks like we are the ones literally empowering them. We become the extensions of media. 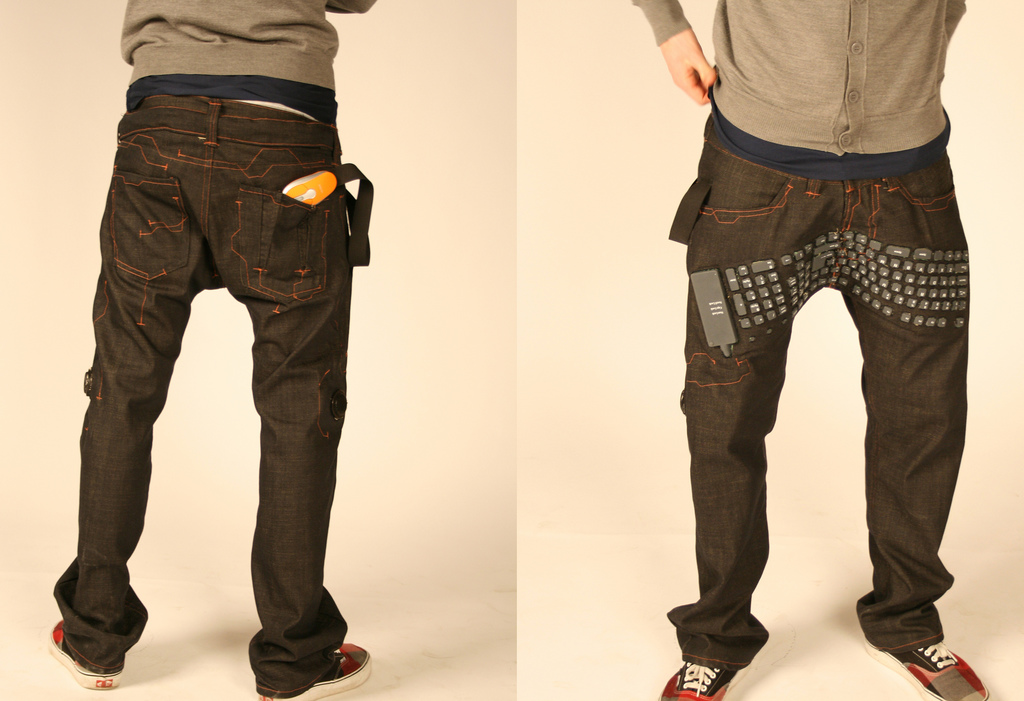 In 1969, Austrian architect Hans Hollein conceived the Mobile Büro, a portable inflatable office enclosed in a suitcase. In the promotional video (the project was realized for a TV show), we see a small aircraft landing. Together with another man, Hollein walks towards a green field where he inflates his office and can eventually work, equipped only with a phone and a drawing board. Finally, creative workers can now do their job wherever and whenever they like. This is what autonomy and self-sufficiency look like. But this apparently autonomous structure clearly reveals the profound dependence of the worker, who looks almost like a fetus inside the uterus. Acccording to Andreas Rumpfhuber — to which this text owes much– Hollein was very strategic about his personal brand. He was an entrepreneur, an "idea man". Given the chance, would he have launched a crowdfunding campaign to mass-produce his Mobile Büro? 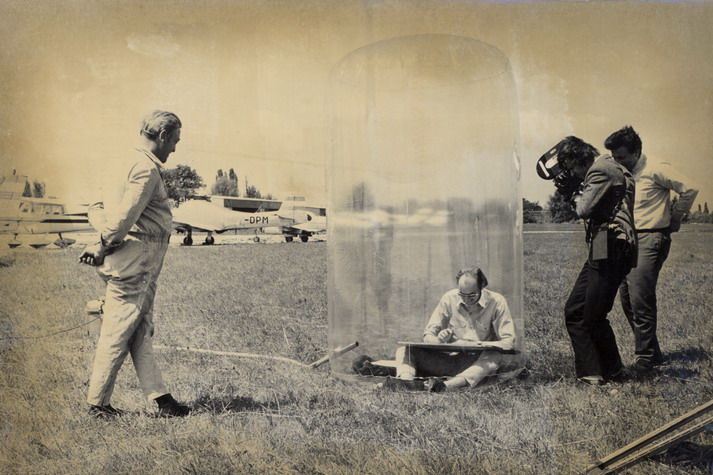 While the traditional office dissolves into computers and informal semi-public spaces, people begin to idealize it. This is how office nostalgia emerges, with its romantic idea of the cubicle, the daily chats in front of the coffee machine, and the joky complicity among colleagues. In this perspective, the office is seen as a symbol of authority meant to be mocked by employees. An instance of office nostalgia is the Generic Office Roleplay Public Group on Facebook, where users simply replicate the typical bureacratic confabulation you would expect from Microsoft in its heyday. Another case in point is Smash the Office, a mobile game which seems to take inspiration from the cult 1995 movie Office Space and the numerous "office rage" YouTube videos. Here, the player needs to smash as many PCs, desks, plants, chairs as they can. This is the expression of rage left to nomadic workers, because what else could they possibly destroy, the closest Starbucks? 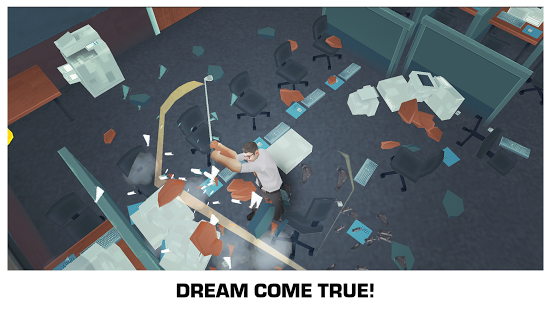