The Institute of Network Cultures just launched its podcast Zero Infinite. I’m very glad that the first episode is dedicated to precarity and proud that the entreprecariat is mentioned in there. 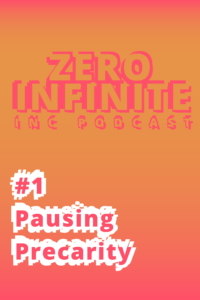 In "Pausing Precarity", Inte, Max and Miriam try to trace back the origin of the term "precarity". In doing so, they refer to the activism of Alex Foti and the book Precarious Rhapsody by Franco ‘Bifo’ Berardi, published in 2009 (even though, according to Guy Standing, we should go back to Foucault, Habermas and later Bordieu). Constructing a little genealogy of the precariat, both as a descriptive term and "a class in the making", is a crucial effort. I realized it when I asked a pretty diverse crowd of around 100 people if they knew San Precario. Only a few did. This happened in Italy, where San Precario had a wide resonance during the late ’00s, even in mainstream media. After a decade of "precarious culture", as Max says, his liturgy seems to have faded. Since the culture around precarity is itself precarious, a relentless effort to keep it alive is desperately needed.

For more than a decade, Alex Foti has been busy constructing the subjectivity of the precariat. "How does one identify as the precariat? Is it useful to do so?" In these two questions we find the dilemma and the paradoxical condition of precarious workers. Even if workers would want to identify as precarious ("coming out as the precariat"), they couldn’t since it would be bad for one’s personal brand. Nowadays, it’s all about "showing youself as a successful being". Here we see the direct effects of individual entrepreneurialism on precarity. "All that is solid melts into PR", Mark Fisher says.

It’s time to deal with the failure of the precariat as a label under which workers would coalesce. Forced individualism and mandatory entrepreneurialism are too strong. The precariat works well as a descriptive term, not a critical one. You don’t come out as precarious, you’re outed as one. This is precisely why I advocate for "the entreprecariat", a term that includes the entrepreneurial dimension, it is not (yet) appropriated by news media to be used as a negative descriptor, and it possesses an ironic, non-gloomy allure.

"Are we all part of the precariat?" I believe that most of us are. Precarity is not just about zero-hours contract, it’s first and foremost an existential condition characterized by the feeling of "knowing nothing". Feelings and perceptions (mentioned by Inte) are what really makes the precariat. So I dare to assert that even office workers with a relatively long-term employment fill the ranks of the precariat. We call risk society "the manner in which modern society organizes in response to risk". Analogously, the precariat is about how the perception of risk (mainly the risk of poverty) organizes isolated subjects. It’s an emotional, perceptual precariat that "cuts through every division in education, background, etc.", as Miriam notices.

Is it possible to build cooperation and a sense of belonging around a shared sentiment which is a mixture of anguish, anxiety and depression? I hope so. But I’m pretty sure that even within the same professional group, single workers are separated entities, they are monads. They lack the time and space to develop class solidarity. This is maybe why in the creative industries, which is the avant-garde of the precariat, one often surrounds themselves with friends who do the same job. Friendship is now meant to canalize work anxiety as well.

Inte points out another interesting issue when she argues that "if you are precarious there is no time to think about being precarious". This is why, precarity should be tackled especially when one is in a relatively stable situation. In other words, one needs stability to address precarity.

Alex Foti, interviewed by Amateur Cities, confirms the fact that precarious workers are not organized. Among them, there are the students, "because eventually they are going to end precarious." In this sense, schools are antechambers of precarity. When students go to the university, when they start a master, they invest in themselves. But they also buy time which can be employed with a certain degree of autonomy. This is why higher education should be conceived also as TAE, temporary autonomous elite. In a TAE, students can semi-freely formulate a genuine collective subjectivity, whose demands and needs are probably the only ones that can drive a convincing leftist agenda.

"Is Universal Basic Income a solution to precarity?" asks Miriam. I don’t know, but I believe that UBI is a good rhetorical tool to broaden the collective imagination of work. By merely discussing UBI, one can break the financial veil that screens our perception of society ("leaving economic feasibility aside for one moment, what would happen?"), UBI is a means of suspension of financial disbelief. One can start addressing all the invisible labor needed to find a job. One can ask why reproductive labor is not considered work only because it doesn’t produce profit. One can question the validity of bullshit jobs. One can think of the value we attribute to social work. One can imagine what it would be like to suspend generalized anxiety. Finally, one can dispute our perverse relationship with work. Young precarious workers are often depicted as lazy people. When discussing UBI, laziness is the first thing that comes up: "with UBI nobody will work anymore!". I reply by saying that many of my friends work all the time anyway, even without UBI and often without any kind of compensation. The podcast include a clip in which Mark Fisher discuss the flawed neoliberal principle according to which "overwork is better than underwork". However, UBI or not, most of us are uberworked and underpaid.