On 23rd of January-2020, I had been invited to give a presentation at Bakken & Bæck, and publicly reflect on the topic of Digital Decay, for their DDD event series. The following text includes my .. well, reflections (explicit version).

So, when we speak of digital decay, I must admit that although I somehow feel like a total stranger to its poetics, I can’t deny the fact that I’ve been grooming my thoughts about it for a long time now. For the event, I decided to share some of my recent project approaches, where digital decay played itself out as a phenomena.

What do I do? Let’s click here and check out my website. In my bio, it says that I’m a true DDD: designer, developer, and de thinker. A question I often ask myself is: Am I really (any of those)? I assume it’s a relevant question for us all, and I often wonder how often do we ask ourselves: to what extent are we anything at all?…So, I’d like to reflect on my online personas in relation to digital decay.

Let’s start with the designer in me. If ever I was one seriously, it was when I designed a product called Walky-Worky in 2018. Coming from the context of an art academy, I tried to illustrate something relevant to digital decay, in a very blunt and conceptual way. Let’s remind ourselves again: Walky-Worky is a working table designed to distract the user from the computational working experience, until the user decides to stop working. Long story short.

What Walky-Worky means by to-stop-working is to close the MacBook (other laptops allowed), as if saying “NO” to the information received from the info-sphere (but mainly Facebook, Instagram, and other distractive social medias). Why did I want to stop the information from entering the user’s brain? I didn’t know exactly why, but now I know that I was trying to prevent passive consumerism of information, dependancy on various feeds, losing track of physicality in actual spaces, lower attention span, and other ‘evils’ of the digital world. As Walky-Worky was my graduation project, I had to follow certain institutions’ rules in order to graduate, and one of them was to plan the showcase of Walky-Worky. For the installation, I made and scattered different layers of information about the concept (In how many different ways can you describe the product’s function?), which were installed in different spaces of the academy. 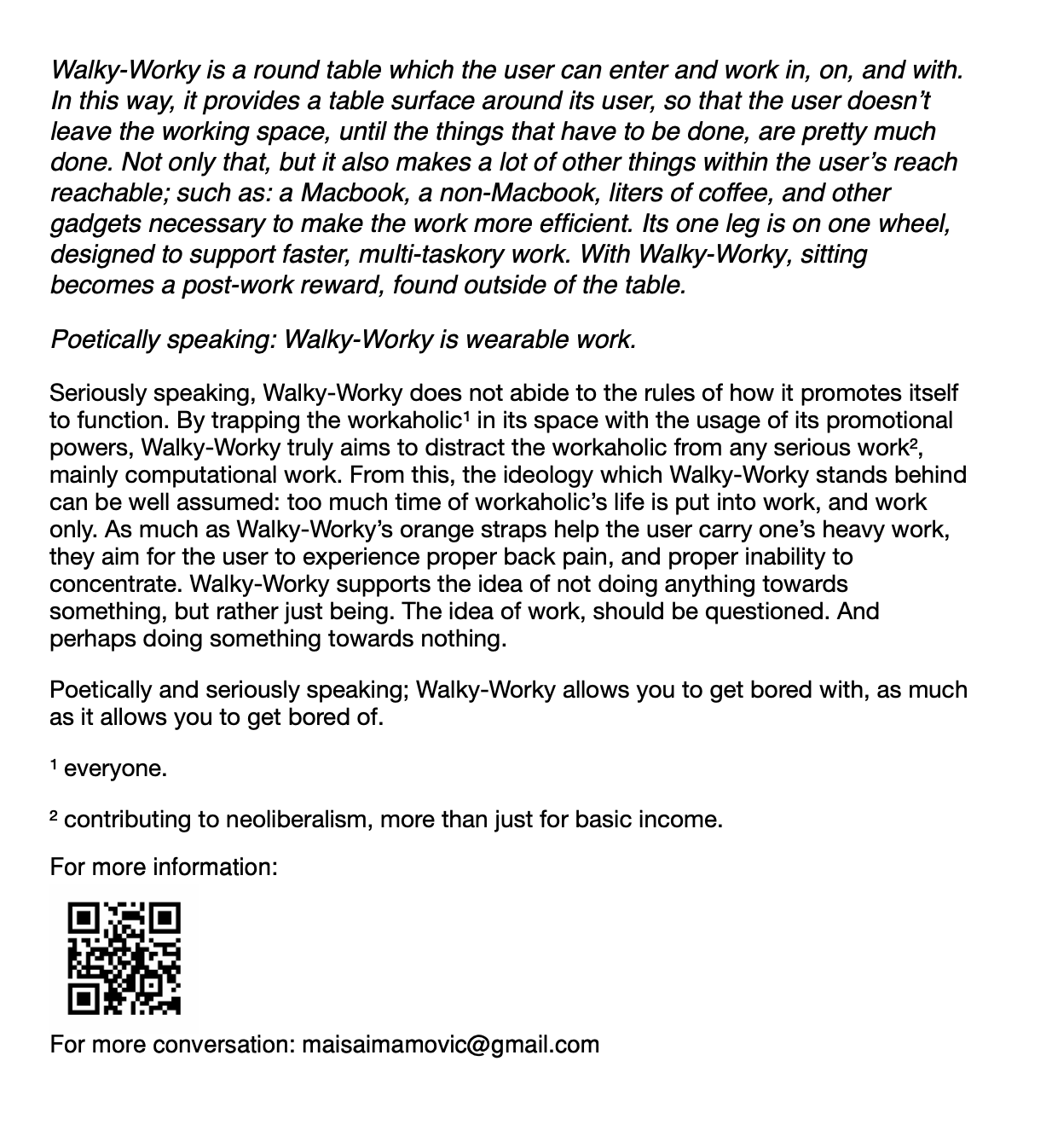 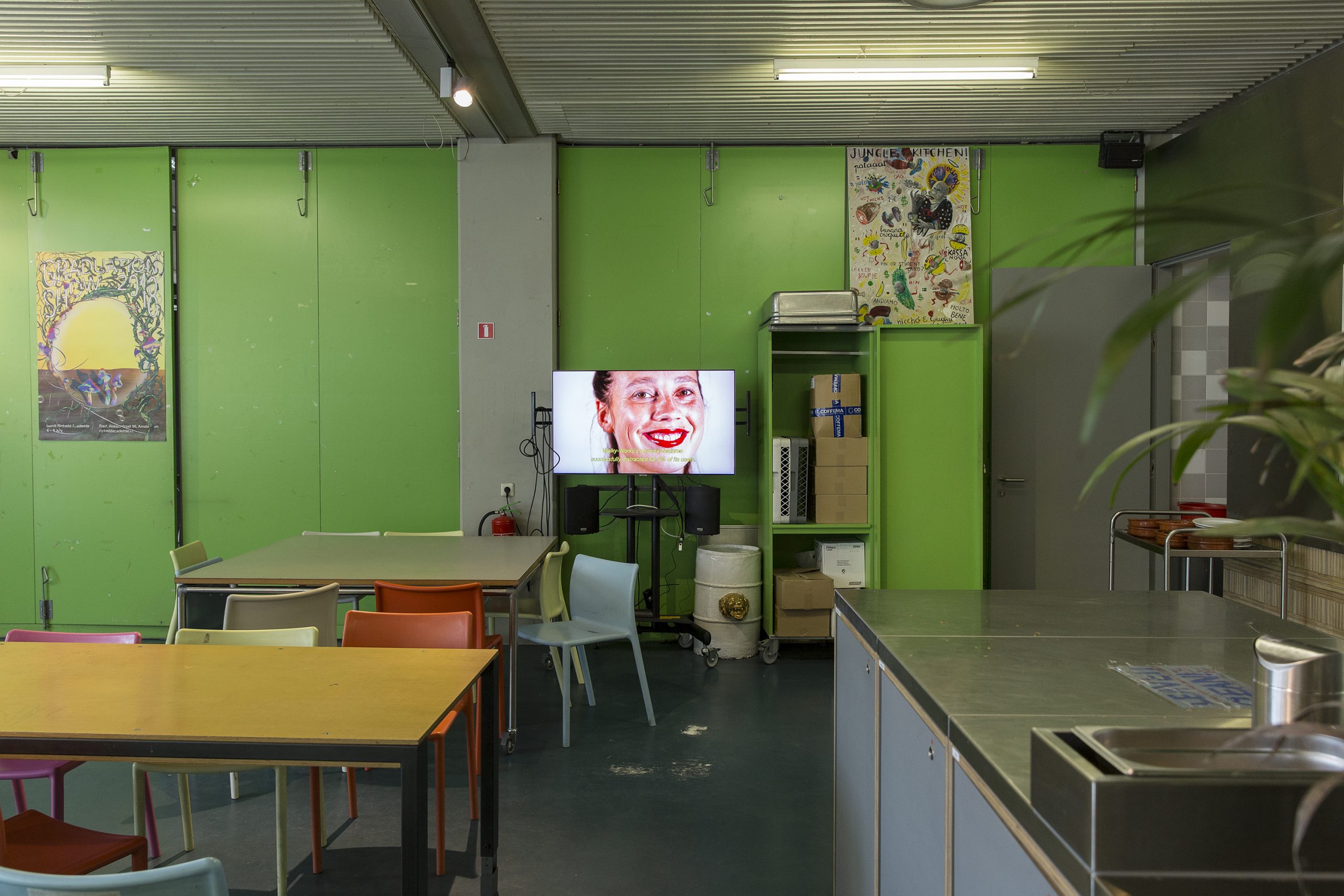 Walky-Worky as a commercial in the canteen 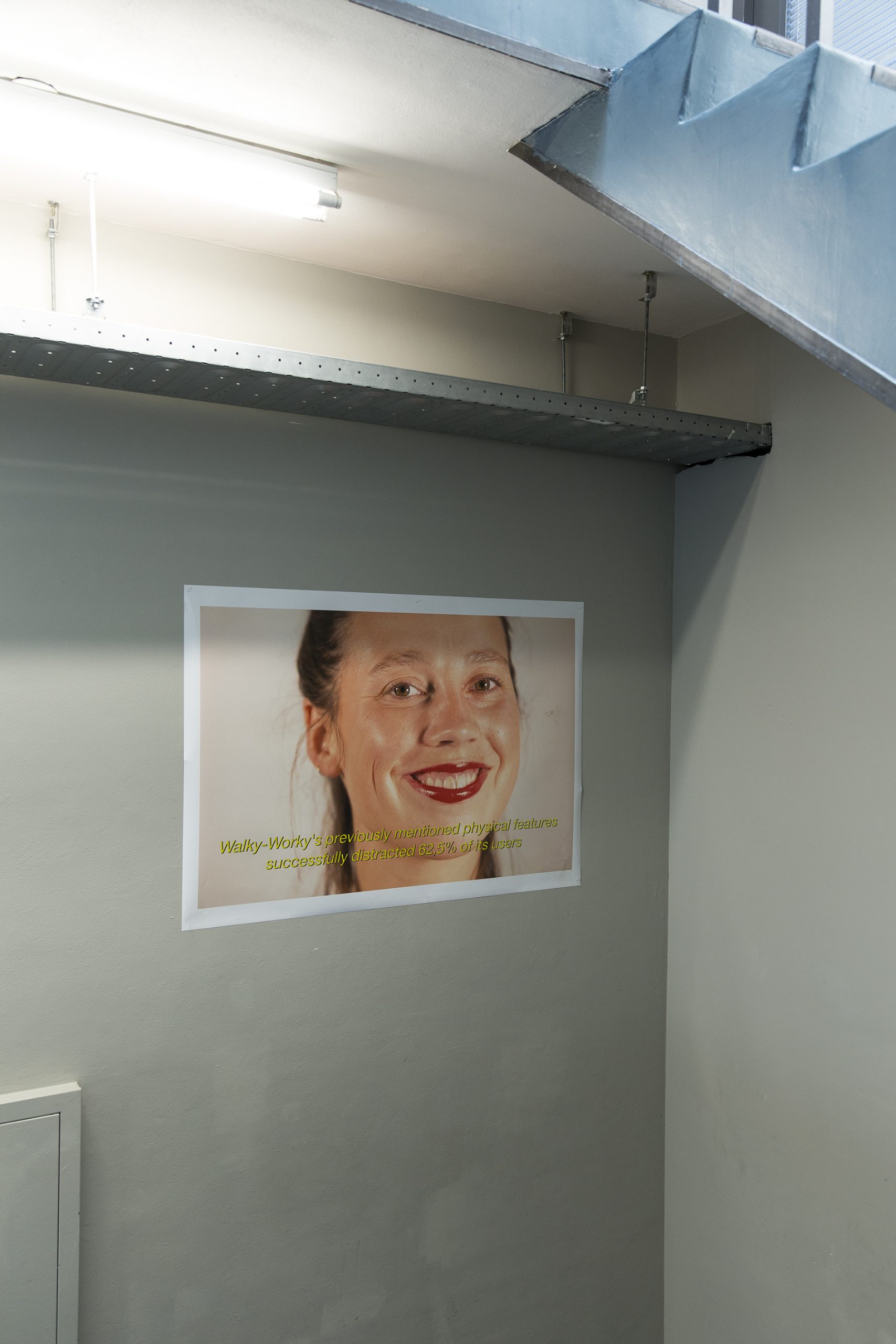 I basically created my own info-sphere (strictly about one product); showcased its repetitiveness, which I was hoping would eventually lead to the user’s information overload. If consumption and overload go hand in hand, this was also true in Walky-Worky’s case: with its constant presence, it became a slightly uncomfortable product to know about. Its success was hiding behind the hidden annoyance it created in others (who perceived it). That’s as far as I got with the physical/spatial designer in me. We can call this era of mine: a physical decay inspired by the digital.

The next me is that of a (web)developer. After Walky-Worky, I decided that it’s time to upgrade my spatial thinking and move the design of information to the digital spheres–>contextualize it a bit. Overnight, I became a Javascript web-developer, thanks to BSSA-the bootcamp school in which I spent three, intense months of coding blog applications, in order to warm myself up for a web maintenance career. Luckily, the web-maintaining position never arrived, so I could choose which web-dev role I wanted to have when creating things for online existence. Of course, I became a front-end web developer and decided to work with artists/creative workers only. I was lucky to have worked with people who were aware of my amateur and un-professional skills, and who allowed me to build accidental bugs in their websites. ***(Unfortunately, the bugs have been fixed by now, so there are not examples to include in here. Feel free to imagine them.) ***

What I’ve learned from bugs and non-maintenance of a website, is that they don’t bother as much, once the websites have been announced to exist online –> to the broader audience. The most crucial aspect of having a website was to announce that one has a website attached to one’s practise. But if that’s the goal, how much attention is thrown at the usefulness/importance of the information?

Now, as de thinker in me is where it gets a bit complicated. In the beginning of my web-development journey, I wasn’t much aware of the hierarchy of information which exists in the digital. The reason why I didn’t pay attention to it was due to consuming reasons behind my interaction with everything online. Studying websites over time cleared out the division behind their purposes. I started to distinguish between commerce-oriented websites + those in flux/experimental. Being more of a flux+poetics-oriented web-developer and working with artists mainly, what I’ve noticed in the last year is an increase of web commercialization, and this as well, applies to the creative sector. Most creatives want header-body-footer kind of online presence, with a hamburger menu which doesn’t look like a hamburger; or split scrolling for more simplicity. The abundance accumulated by online tools and platforms designed for us to craft our artistic online presence (such as Wix, SquareSpace, Cargo Collective and so on) is generic. They all sell similar features/options, which we have no time to de-code or personalize. At the same time, with the popularity of these tools and their infinite offer of limited design (which seems unlimited), it’s hard to imagine other purposes of web-development, other than those of selling/representing/documenting. And that is for me, the definition of digital decay: digital boredom of digitally consuming constantly the same.

Looking at the web-development through the lens of architecture (my actual BA studies): where the hierarchy of information exists, and social life takes place, I cannot stop wondering why web-development can’t behave the same. What I’m thinking of is a living website (not a social network), full of bugs which will later be fixed and replaced by new bugs, or websites full of descriptive exhibition texts which will later be deleted and replaced by a gif, because the owner/user one day woke up and suddenly decided that it’s not about literal representation of the happening, but the feeling one is left with after the happening. (In other words, why can’t web-creation also be a tool for artistic expression?)

I somehow believe that if the context is in constant flux, the website of the context should also represent the flux.

Anyhow, what was unfortunate was that Martin La Roche’s presentation was prior to mine, during which he showed a website which killed my concerns about the current + mainstream web-development trends. How else can we archive art + build museums online (and without having user’s purchase of the ticket, as the main goal of online interaction)? 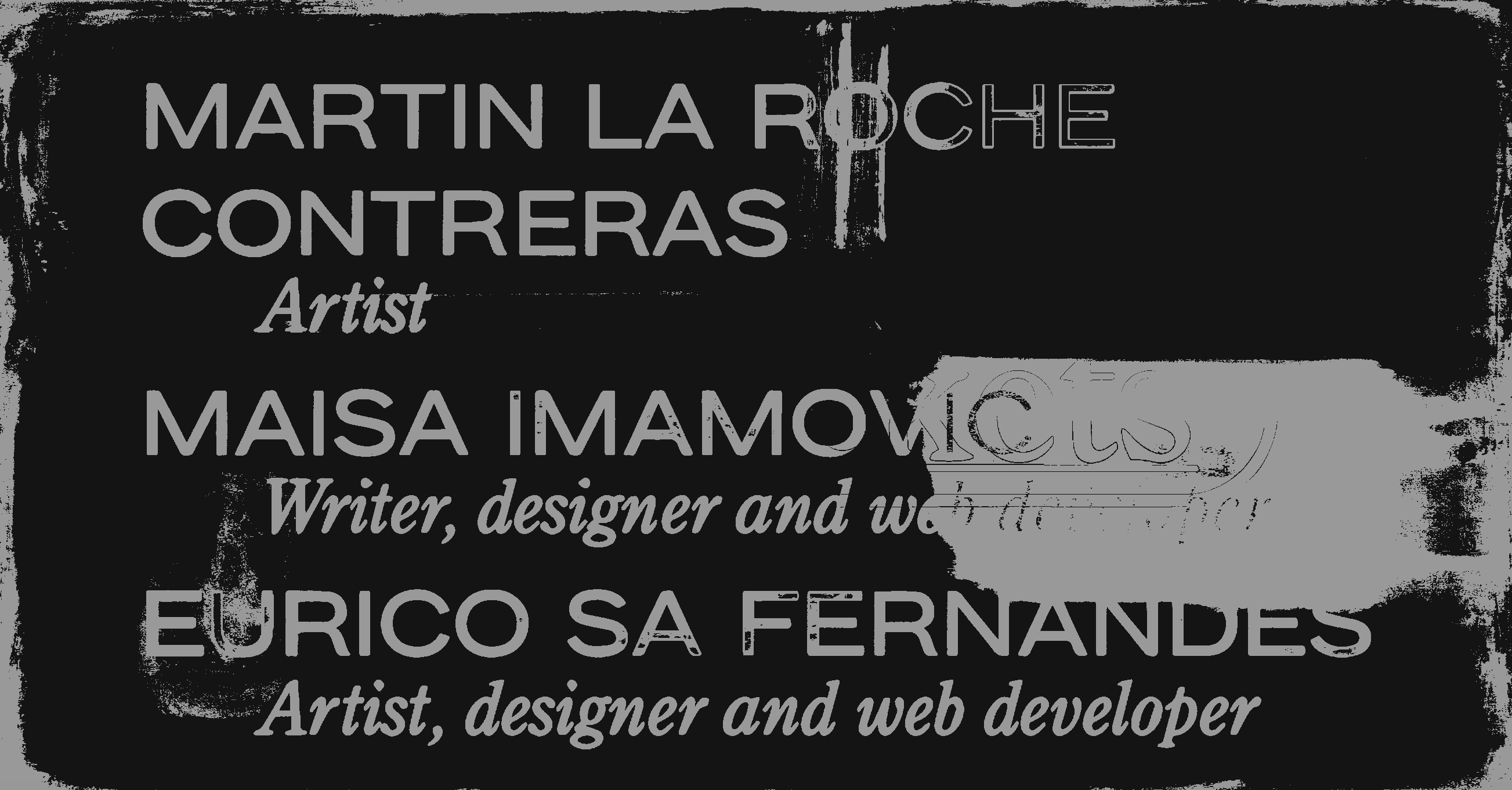