Bill Maurer began his session with a statement about the alternative currencies today: “It’s a wild west out there”. Of course, a lot of the emerging payment systems fail along the way. 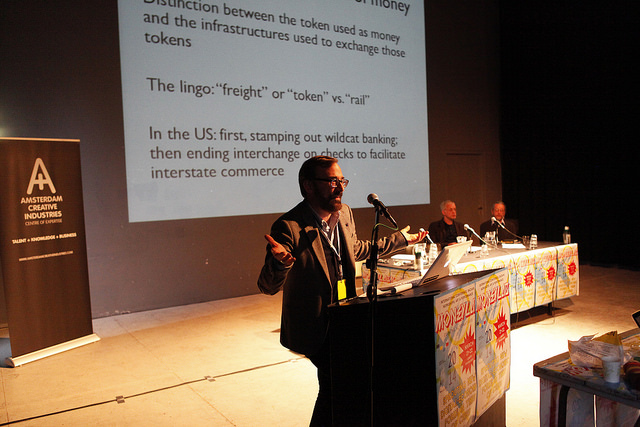 Looking a bit at the origin of alternative currencies, we see the 19th century’s references to the railroad systems. Terms such as “freight” and “token” start to be used about the same time as the habit of cashing in checks arises.

Wildcat banking in the 19th century’s United States is, perhaps, similar to what we see in the alternative currency systems today: the actual regulations of banking varied from state to state. Non-par banking also occurred at that time – the practice of charging fees to execute a draft or check drawn from another bank.

In terms of digital currencies, the Diner’s Club emerged in the 50′s as one of the first independent credit card companies in the world, producing credit cards for travelling and entertainment purposes.

The founder of Bank America/Visa would afterwards say about the invention of the credit card system: “We were in the business of the exchange of monetary value, not in the credit card business”.

The 20th century sees a large number of new payment systems arising around the world. The “PayPal” system rides the “rails” of payment. M-Pesa in Kenya is currently the most developed mobile payment system in the world and a very useful micro-financing tool for a developing country. M-Pesa allows users with a national ID card or passport to deposit, withdraw, and transfer money through their mobile phone. Some other examples: American Express issues private tokens and the newly popular Bitcoin sees the “token” and the “rail” converge; gift and prepaid cards don’t require a bank account in order to be activated.

Reputation based currencies are another interesting example (see Klout score) – in that case, using your online and/or offline popularity could gain you rewards.

The future of money is a hot topic right now. Will we look at money as advertising/marketing tools? Will we have a decentralized ledger? There is a battle about to happen over who controls that ledger.

Ownership over the means of value transfers is problematic:

“…the provision of money by private companies over private infrastructure risks undermining an important function of the public sector, namely, that the means of value transfer are not ‘owned’ by anyone” (World Bank 2012: 71).

Maurer ended his presentation with some questions as food for thought regarding the future of currency:

During the Q&A session, Maurer was asked about what he makes of the classical “money as enforcement” paradigm. To this he replied that, with digital currencies, this is exactly what we want to get rid of: enforcement. Instead, we want to replace a system of scarcity with one of needs and solutions.