The Reimagining Money project explores the aesthetic and cultural aspects of money through research and presentation of a variety of media. Initiated by Max Haiven, Assistant Professor in Art History and Critical Studies at the Nova Scotia College of Art and Design, the project positions money as “a medium of the imagination,” a means of collectively visualizing our network of social relations. In his MoneyLab talk, Haiven posited that alternative currencies add facets to that imagination by providing avenues for reshaping our social structures, and for working outside the boundaries of state power. 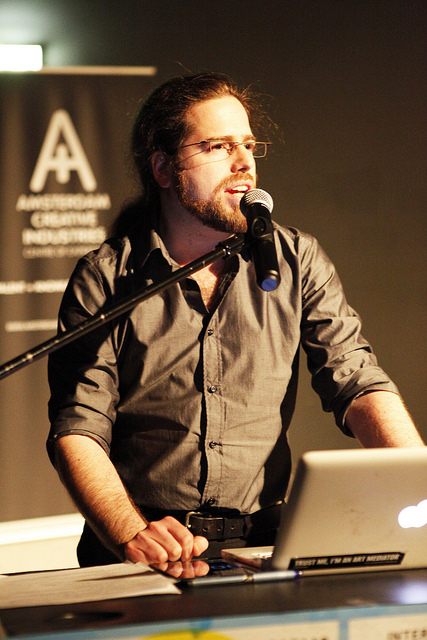 Haiven warned, however, against a purely utopian view of alternative currencies, using Marx’s criticism of the Paris Commune as a cautionary tale. When the Paris Commune tore down the Place Vendome Column commemorating Napoleon I, its members chose not to tear down the Bank of France, anticipating that they would later require its resources. Marx viewed the Commune’s merely symbolic gesture as a missed opportunity to make concrete material interventions, and Haiven urged those conference attendees working to reimagine currencies to avoid making the same mistake.

A component of the Reimagining Money project is an investigation of what Haiven has dubbed the “dark arts of finance.” He addressed these “arts” in three sections, first surveying the current status of art’s commodification, then moving to an examination of the aesthetics of money, and finally reviewing artworks that activate money’s relationship to the medium.

Taking stock of the present state of the art market, Haiven called attention to major art institutions adopting financiers for their boards, and artists adapting their work to meet market demands. He also gestured to the myriad tools that have emerged to quantify art’s value, such as ArtRank, a site that attempts to advise investors on which artists to buy or liquidate.

Haiven then discussed how the aesthetic qualities of money open up possibilities for its reimagining by confronting viewers with the tensions between money and art’s values in contemporary culture. He illustrated this point with the work nasdaq 80-09 (c. 2008) by Michael Najjar, which visualizes the rise and fall of the stock market through manipulated photographs of Argentinian mountain peaks.

Finally, Haiven listed examples of artworks that use the medium itself to highlight art’s complicity in the economic system. He suggested several methods that artists employ to these ends, including repurposing art’s perceived prestige, as in the work of Barbara Kruger, or creating objects explicitly designed for purchase by the elite, such as Damien Hirst’s recent projects.

Haiven maintains a Tumblr collection of artworks that utilize these approaches which, in addition to his other work, provokes further questioning of our relationship with money, and of money’s role in our relationships with one another.