Franco Berardi started his presentation by linking the subject of money and alternative currencies to the Occupy movement, whose tonality and intentions, in his opinion, had a lot to do with hacking the future of money. Berardi described the Occupy movement as a ‘self affirmation of the body against the rationale of abstraction in the financial sphere – the final avatar or manifestation, an attempt to deconstruct the financial automation of social life.’ 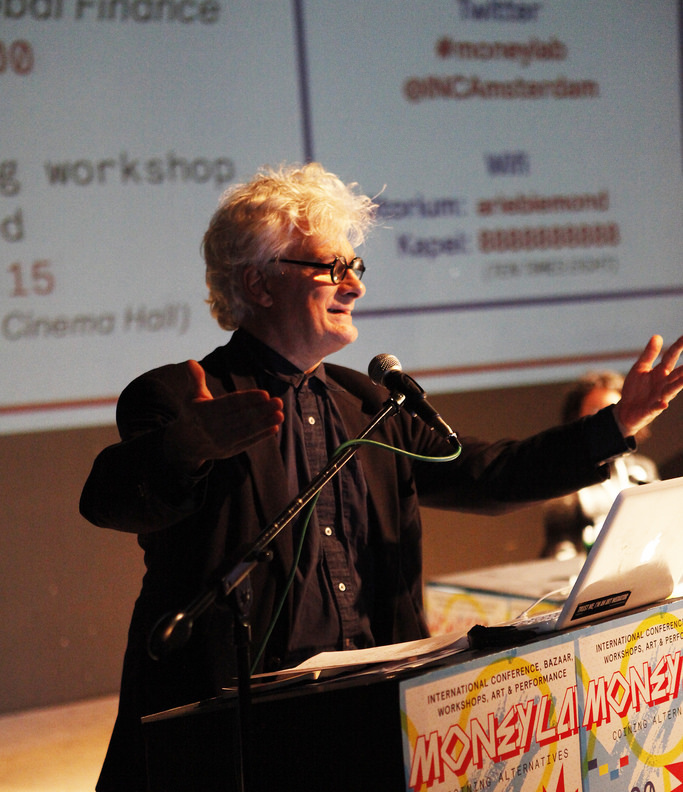 Furthermore, Berardi discussed a few concepts, beginning with automation; in his approach, this not a new word yet it’s taking a new meaning in our age – a final meaning. Berardi claimed we are witnessing the final implementation of automation. This can be considered the central issue of the last 50 years. The problem of these past 50 years of political, social and cultural life is the possibility of automation, as Berardi raises the question whether automation is ‘the solution to get out of the induced labour or is actually the chain which is going to enslave us’.

Next, Berardi talked about insolvency and what it means for him, arguing that he considers the process is an equivalent for social solidarity. In regards to alternative currencies, Franco Berardi sees two main directions. One is territorial – the local exchange, trading, exemplified by mentioning Ithaca Hours and other alternative currencies in Italy. The other direction contains Bitcoin and all crypto/digital currencies, that are ‘much more frightening’. However, the latter represent the only possibility of coming out from the ‘old fashioned territorial’. Mentioning the Occupy movement again, Berardi argued that alternative currencies do not have a technical problem or a software one, but a problem of solidarity and trust. These are the main elements that can help develop alternative economies.

Franco Berardi concluded his talk with an example from the recently released Spike Jonze film “Her”, saying that humanity needs to work on the problem of automation of linguistic interaction – “the real process which is giving sense or taking sense from our life, our struggle, our process of understanding”.