In his talk, Brett Scott discussed how hacker ethics could be applied to the financial system. He began by speaking about different power relations in finance. Scott claims that the way people imagine the financial sector to function can only perpetuate the inherent power differential that already exists. People imagine finance as a complex industry that only financial experts and bankers can understand. Finance is a world of the elite. This is a picture often promoted by the financial actors themselves in order for them to affirm their own status and knowledge. Yet, this way they alienate the average citizens from participating in the finance sector. Scott aims to address the reasons why people often feel passive and distanced from finance, and how they could learn from hacking ethics in order to take a more active role.

One reason of passivity is the perceived complexity; the other is that people believe finance is ruled by an expert elite. Scott showed several such illustrations of the common imaginaries that people have: black suit bankers, automated trading machines, a world economy in the hand of others. In an analogy, Scott compared finance to a black box or a ‘windows interface’. The latter refers to the screen of any electronic device (from smart phones to tablets and PCs) that acts as a window for the user to connect to the virtual world. What the user knows little or nothing about is how the electronic device actually works, how it is wired, let alone the protocols and means of control embedded in the Internet. Finance uses similar familiar interfaces that in fact obscure people’s understanding of it. 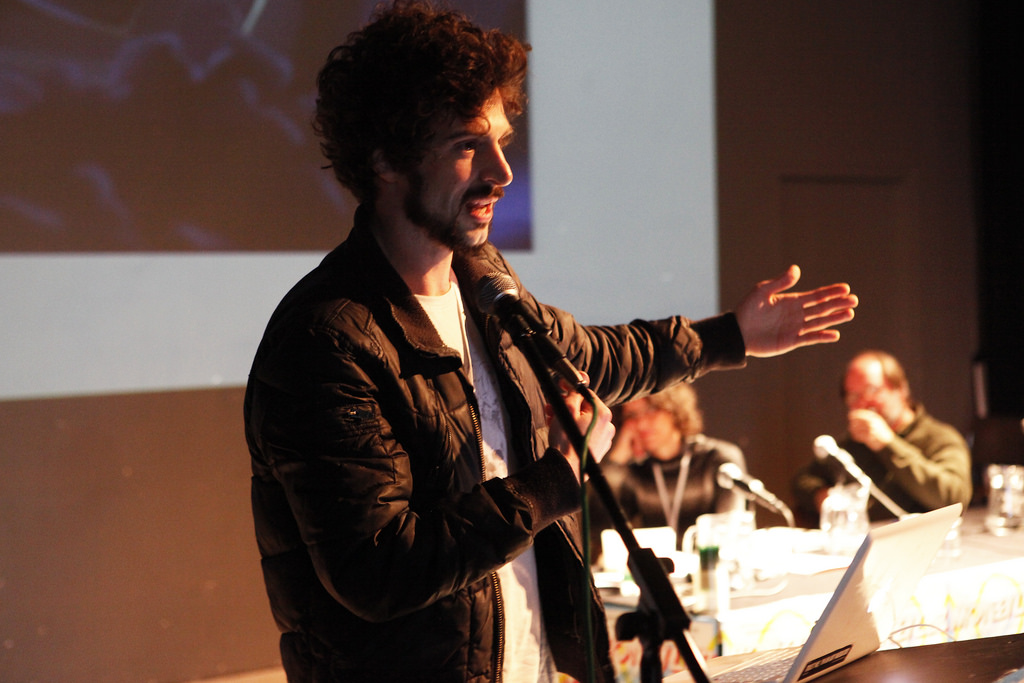 Moving more to the topic of hacking, Scott displayed a Steve Levy quote saying “Hackers believe that essential lessons can be learned about the system – about the world – from taking things apart, seeing how they work, and using this knowledge to create new and interesting things.” Scott compared this form of subversive ethos to examples such as urban exploring, radical approaches to anthropology, and “kicking the door down to make a table.” All of these forms of hacking involve the blurring and challenging of boundaries and norms, a theme he went on to discuss in more depth, touching on the ‘copyleft’ movement, John Cage’s silent compositions, and other forms of deconstructing perceived binaries.

Turning to more personal experiences, Scott described attending a G20 protest after leaving work (at the time, he was working as a broker), only to be commended by the crowd for “coming disguised as a banker.” He used this as an example of how people often have trouble reconciling that members of traditionally opposing groups could in fact be a member of both. One of his final slides summed up how he views the hacker ethos, and how it can be applied to the financial system: by “challenging power and maintaining openness through playful subversion and rebellious creativity.” From his experience with activist groups, Scott noticed how they tend to set a clear boundary – us and them – when relating to financial actors. This, suggested Scott, does not help create a conversation. Instead, going to events, meeting these actors and striking a conversation can be more playful and fruitful. Another idea is to look at organizations engaged with alternative finance, whose aim is to make people behave more like producers of financial goods rather than mere users. Finally, Scott mentioned his project ‘The London School of Financial Activism’ that aims to gather people interested in understanding how financial tools and concepts work, by experimenting with them.

In the end, Scott explained that it is this hybridization of knowledge between opposing or dissimilar communities or ideas that lead to the most creative and positive changes.