At the ‘MoneyLab: Coining Alternatives’ conference, we discussed crowdfunding as an alternative revenue model for the creative sector. ‘Alternative’ in this context is defined in relationship to mainstream finance models. One point of differentiation is the legal framework nexus – ‘alternatives’ are, for now, outside of it. Crowdfunding, however, might soon not be.

Compared to mobile money or crypto currencies, crowdfunding is a more clear and stable revenue model. Its potential has already been tested for a few years now. With 94% of all crowdfunding activities taking place in EU and US, the latter have taken more and more interest in it. Over the last year, some legal frameworks have already been developed – the case of the United States and certain EU countries such as Italy, Spain, France and UK. Others are uncertain – such as an pan-european regulation of crowdfunding. 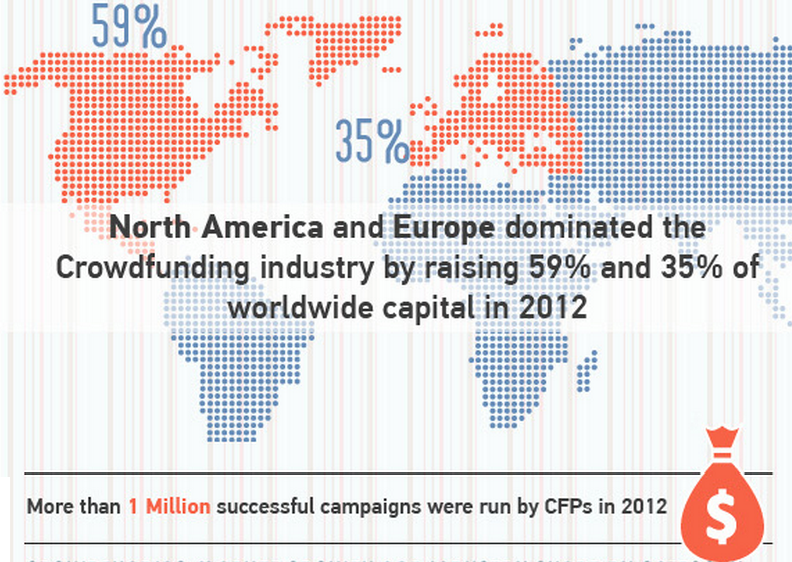 What are the prospects for a pan-european legal framework for crowdfunding? What does current legislation in some of the EU countries involve? What are the implications for the stakeholders (crowdfunding platforms, funders/investors and those who use it – entrepreneurs, innovators, cultural practitioners, artists etc)?

I would like to give an overview of the current legal developments (interesting things are happening!) on crowdfunding, discuss some prospects and implications. The focus is on an pan-european legislation as well as national ones, but a follow-up and comparison with developments in the US is on its way.

CROWDFUNDING LEGISLATION IN THE EUROPEAN UNION?

Late 2013, the European Commission launched a survey that targeted the main stakeholders in the crowdfunding industry, asking their opinion on whether the EU should engage in creating a pan-european legislation. A couple of weeks ago, it released the survey results as well as a communication of its position in regards to the topic.

In the communication release, the E.C. recognizes that the growth of crowdfunding is significant – the funds raised in 2013 via it is comparable to the revenues raised by business angels and venture capitalists, even if far from the established bank-lending model. The E.C. is aware that , unlike the latter models, crowdfunding addresses the creative & cultural sector, as well as the sustainable startup scene. The recent cuts in public budget and the effects of the financial crisis are acknowledged, together with the sensitive position of cultural sector, as well as social enterprises in this context. The potential of crowdfunding is thus mentioned not only in terms of direct finance access for these target groups, but also in beneficial side-effects such as creation of new jobs, earning new skills, new channels of testing and marketing a product/service etc. However, the report cautiously mentions that crowdfunding is still an emerging model and cannot be used to replace public or bank funding.

Key issues that the E.C. identified (guided by the survey results) are as follows:

For some of the raised issues, there are ways in which the EU existing or currently-upgrading legislation can cover. In the case of money laundering, an uniform transaction threshold, as currently discussed under the Anti-Money Laundering Directive and Regulation 1781/2006, might be a solution. As for IP protection, earning a patent that is effective in the whole EU for this purpose might be made possible by upgrading the current patent system. In some EU countries, some of the issues are tackled by existing and developing national legislation.

Some of the above issues however do not have any current legislation to tackle them, hence the E.C. has outlined the following proposals specifically for crowdfunding:

These proposals are just the first steps to a possible pan-european legislation. The reason why the E.C. chose not to dive into this at the moment has to do with some insights from the survey.

The survey had roughly 900 respondents. Almost half were people who have contributed or might consider contributing to crowdfunding campaigns, 152 were project owners, 81 were crowdfunding platform owners and 91 was catalogued as academic, banks, business angels and venture capitalists (a rather chaotic category) and finally 10 replies were from national regulatory authorities. Interestingly, almost half of all response were from France and Germany, with UK, Italy, UK, Spain, Austria and Belgium each holding from 5 to 8% of the total responses. No input was given from Maltese or Norwegian stakeholders. Why so? Perhaps a lack of awareness, perhaps a unequal dissemination, but it could also be that the people who responded were those who were already more inclined to support pan-European legislation, as a pointed out in NowStreetWire. Another uneven response rate I came across is that all respondents who are contributors are male (do less women donate / invest / lend to crowdfunding campaigns? Why? Or did they simply not fill in the survey?).

As expected, different crowdfunding models have different needs. The crowdsponsoring model (where not financial return is involved – such as the donation model) is doing well. 81% of the platforms operate cross-border. Only one third of survey respondents mentioned that further support from the EU (namely for the legal uncertainty).

Of course it’s crowdinvesting and crowdlending that pose significantly more issues. For example, only 38% of the platforms operate cross-border due to authorization costs and little know-how about foreign legislations, although more than half would like to do it. This is despite the fact that crowdfunding was generally perceived as model designed for cross-border functionality. There are furthermore specific risks perceived in regards to equity and lending models: fraud, money laundering, IP theft, project failure, money loss, no legal structure in place to protect stakeholders. This might explain why there is a stronger call for EU support for these two models. For example, a need for coordinating self-regulation at EU level for financial return crowdfunding is supported by 42-44% of the respondens and for non-financial forms – only by 31%. Nevertheless, the request for public (EU) funding in supporting the crowdfunding platforms, project or expert institutions is currently low.

This decision has been commented by actors involved in crowdfunding. For example, the European Crowdfunding Network welcomed the E.C. acknowledgement of the potential of crowdfunding however express concerns that national regulations on crowdfunding might fragment the market and create difficulties in cross-border expansion. It advocates for pan-european legislation in this matter, to make the adoption and functionality smooth. Another opinion from CrowdfundInsider however agrees that it is better to first observe crowdfunding before imposing legislation. The reason the author gives is that each EU member tackles legislation and financial models differently; financial models and products might report to different authorities and regulations within the state. It is hard to even place crowdfunding under a specific authority and regulation at the moment. A pan-european legislation for it might be hard to apply and thus it might hinder its growth.

WITHIN EU: NATIONAL LEGISLATIONS ON CROWDFUNDING

The British context
A legal framework for crowdfunding is already active in the country as of early this month. The legislation concerns crowdinvesting and crowdlending specifically. For the crowdinvesting model, the most debated legal provision is the limitation of one’s investment to 10% of one’s net assets in crowdinvesting during one year. This is argued by authorities as a way to protect inexperienced investors from investing too much in startups, given that 50% to 70% of these are said to fail within their first year. Equity crowdfunding platforms however think this will disconcern contributors, taking the ‘ crowd out of crowdfunding’ and leaving space only for accredited investors. For the crowdlending model, there is also a minimum of financial resources that platforms need to have in order to protect themselves from potential failures.

Overall, the new rules seem to place a lot of (legal) responsibility on the platforms themselves. They need to mediate the relationship between startups and investors/lenders and protect both sides. Obligations often include a minimum of financial resources (to assure solvency), ensuring that projects will run despite the platform’s own insolvency, protecting and rightfully informing consumers, providing conflict resolutions etc.

The Spanish context
Similar legislation was proposed (but not yet voted) in Spain, where the focus is on protecting inexperienced lenders and investors. These platforms will be required to register with authorities and the central bank, posses initial capital, and are subject to big fines if they act otherwise. Proposed limitations are of 1 mil euro/project, a max of 3000 euro individual financial contribution/project and a max of 6000 euro individual crowdfunding contribution/platform.

The French context
The recently proposed French legislation is less constraining and thought to best reflect the industry’s expectations. Donation models are subject to existing payments laws but no further legal provisions, while for profit crowdfunding platforms need to respect transparency rules, a quality label and offer correct guidance to investors/lenders. A lender can contribute a max of 1000 euro per project in order to attract a wider pool of supporters, but there are no further limits to how many such contributions one can make.

The Italian context
Italy was the first country in the EU to implement legislation on crowdfunding. According to legal provisions, only ‘ innovative startups” (those that invest in R&D or employ researchers) can use the model. Furthermore, it is only valid if the project has at least one accredited investor (i.e. bank, financial corporation, incubator) who invests at least 5% of the capital offered. Not just anyone can own an equity crowdfunding platform – they need to be either a bank or meet certain criteria of professionalism. Italy is, so far, most specific on who can use crowdfunding.

All in all, we can expect that legal initiatives will be proposed and refined in other EU countries in the coming years. For now, it is worth monitoring the effects of the legislation that has been voted. Clearly, crowdinvesting and crowdlending platforms will need to take up much legal responsibility. Certain legal provisions – like France’s max investment rule of 1000 euro/project is welcome as it invites a diverse crowd to participate in a single project, and it specifically encourages inexperienced investors while still protecting them. Others, like Italy’s strict rules on who is eligible to participate, might do the opposite. A pan-european legislation is quite possible, as it is simply more effective in allowing platforms to operate cross-borders and create legal certainty for all participants. Yet I hope that contributors are interested in truly supporting local projects with an impact rather than diving into for-profit speculation. Furthermore, although non-profit crowdfunding (which is currently employed mostly by the cultural sector) is acknowledge as an important revenue model for artists & creatives, it triggers very little interest legal-wise as it possesses less financial risks. Yet how about untapping crowdfunding’s potential here? What are the challenges and why not carry a survey for the cultural sector specifically? What can be improved there?

There will be a follow-up to this post with the current legal development of crowdfunding in the U.S. as well as comparative analysis with initiatives in Europe.