Max Haiven is an assistant professor in the Division of Art History and Critical Studies at NSCAD University. In a previously unpublished interview conducted in October 2013, Haiven corresponds with IMPAKT Festival (Utrecht, Netherlands) about his multifaceted research, teaching, collection, exhibition, event and publishing project about the cultural dimensions of finance capitalism and the radical imagination. More information can be found at ReImaginingMoney.net.

What is your Reimagining Money project about?

It’s a project through which I’m seeking to explore three things at once.

First, I’m trying to track and interpret visual art that uses money (coins, bills, banknotes, credit cards, etc.) as a medium or that comments or represents money through other media.

Second, the project is part of efforts to unpack the changing influence of money over art (especially contemporary visual art) and aesthetic politics at a moment profound global crisis.

Finally, it’s a more theoretical exploration of the idea of money as a form of representation, and of art as a unique but revealing commodity in our age of “cognitive” or “communicative” capitalism, when creativity is marketized as never before.

The project has a few components. I have started “collecting” art that mobilizes money as a medium or theme on a Tumblr site (moneyandart.tumblr.com) and I think there are now over 350 examples, most from different artists. I teach a course on the topic at the Nova Scotia College of Art and Design, where I work. And last fall I curated a space called A People’s Bank in Halifax (Canada) for Nocturne, the city’s annual all-night arts festival. I also am writing some academic and some non-academic essays on this topic, and I’m bringing together some collaborators to do an edited book in a few years, which will include both critical essays and reproductions of artwork. 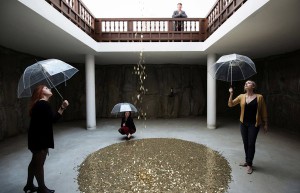 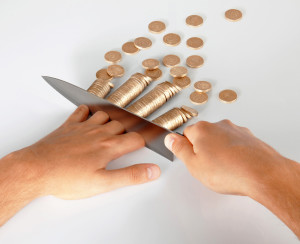 What inspired you to do this project? Why do you think the topic is relevant?

For a few years I’ve been researching the cultural dimensions of finance capital, both in terms of the cultural norms, behaviours, and beliefs that make the financial industry “tick” and also in terms of the way finance influences culture more broadly concerning art, popular culture and everyday life. I became increasingly interested in two things. First, the way the value of financial assets like “collateralized debt obligations” and derivatives contracts are essentially conspiracies of belief. After all, even though they make up a huge percentage of the volume of global wealth, financial assets like these are, for all intents and purposes, made up out of thin air and their value only exists so long as there is a buyer who believes in it. Second and related, I was interested in whether there might be some merit in understanding these financial assets as techniques of representation, as aesthetic practices. Stock and bonds allegedly represent some underlying real-world economic reality, but there is a sort of suspension of disbelief at work that pervades the financial markets which I find fascinating and terrifying. What real wealth does a credit-default swap represent?

So I asked myself: where else can we find a sphere of activity where largely arbitrary value is assigned to largely immaterial things and sustained by a culture of belief and credibility, but which has ramifications that resonate throughout society and culture? Art seems to be the place. After all, pieties aside, in an age of postmodern dematerialized art practice, when we have abandoned any “metanarrative” by which to judge art’s “true” value, the value (especially the economic value) of a work of art is essentially a conspiracy of belief too. So, with this hypothesis in mind, I went out looking for the most tactile trace of this overlap between art and finance and I discovered that hundreds, maybe thousands of artists are using money as media. Most of that art is bad, lazy and boring. But some of it is tremendously moving, aesthetically, intellectually and politically.