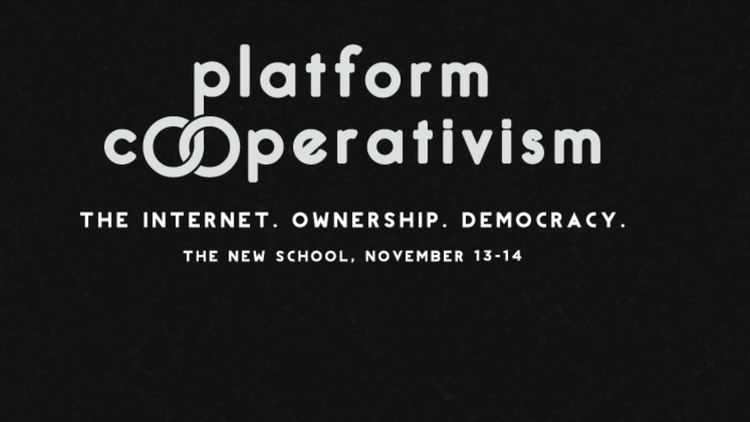 Last week the New School in New York hosted a two-day symposium that set out to explore how the internet can be changed to create new democratic structures and social commons. The conference hosted a range of speakers from Micheal Bauwens, Yochai Benker and two that will be at Moneylab next weekend, Rachel O’ Dwyer and Dmyriti Kleiner.
The opening keynote was delivered by Trebor Scholz (video here), one of the organisers who provided some useful resources and terminology for reconfiguring the political and social implications of web 2.0. Scholz sets out to define platform cooperativism in relation to the sharing economy that is so disastrous it deserves a new title; Scholz describes it as the ‘on demand service economy’. Businesses such as Uber and Airbnb exploit the network and mobility of the Internet to maximize profit for centralized American businesses from global networked, low paid digital workers. The growth of the on demand service economy will eventually run your car, your labor, your emotions and most importantly, your time. And these services are built on low paid workers, Amazon’s Mechanical Turk for example pays its workers $2 per hour. Like the domestic workers of the last century who were tucked away in people’s houses, the digital workers are hidden in-between the algorithms. It is urgent to acknowledge the consequences of late cyber capitalism because as Scholz highlights digital labor is not a flash in the pan.1/3 American workers are now an independent worker or freelancer earning their income(s) through digital tools and with little or no workers rights.

It is important to ask what does this on-demand economy stand for? Terms like innovation that are so frequently used to describe such ventures that overlook the exploitative, oppressive and unethical side effects of networked capitalism. Examining the value system of Silicon Valley start up culture can help develop viable alternatives. Should we really be calling these initiatives as innovative when they are grinding down workforces to generate profits a handful of Silicon Valley start up companies?

“Think about innovation in regards to its effect on the commonwealth and ask
how can we call the sharing economy innovative if it prolongs structural inequality, classism & racism?”

‘Shared economy’ businesses often use bullish tactics to maintain power in countries by prolonging legal procedures and avoiding social responsibility. So frequently do digital services avoid responsibility for violent and damaging social affects caused by their applications and services (see numerous cases of Airbnb related robbery or sexual assault in Uber cabs) because automated management avoids accountability. The sharing economy is the pinnacle of an exhaustive unregulated capitalism that is unethical, unsustainable and in need of change.

Scholz provides some concrete examples of share economy business models that transform the digital worker model into collective ownership of the platform. Unions and co-ops can own the Internet services that they use collectively, to enable workers to directly economically benefit from their labor.

Types of platform co-ops listed by Scholz include are

City owned platforms
These are speculative platforms where cities would build a platform similar to Airbnb but the profits go back towards the local government. This would allow for the profit that is made of from these services to back into the local economy and the public space. Why can’t these applications integrate with tax regulations to promote wider social initiatives rather than divert profit to off shore tax havens? Scholz calls for further speculative scenarios to begin imagining how platform cooperativism can be a reality. How can we begin to convey ethical concerns through user design? He thinks we should begin these efforts in places where Uber is illegal, contested or unpopular – for example Rio de Janeiro which recently banned Uber.

Workers need to establish their own de-centralized rating systems and Scholz suggests that blockchain and p2p crypto methods may be useful in creating token-based workers rights. Scholz admits that these visions are ambitious; it is for an economy that would benefit all. This ideology expands technology and market driven economy and is a social and political stance to create a movement for the commons in the 21st century.