Money is the fuel that drives the dreams and ambitions of fathers and mothers.

Money is the fuel that fires the best aspirations amongst all of us.

The revolution in financial services is not about tapping the phone versus swiping the card; it’s much more profound.

Money 2020 is a conference and tradeshow event held annually in Las Vegas on future innovations in payments. The Fintech conference has grown since its inaugural event in 2012 and with now over 10,000 attendees, recently moved to the Venetian hotel in Vegas, a sprawling venue that features miles of casinos, stadium-size conference spaces and an indoor reproduction of a Venice street scene complete with an Italian sky, canals, gondolas and boutiques (but minus the feral cats). So what does the future of money look like to Money 2020?

A big focus of this year’s Money2020 was on what one Internet of Things panellist referred to as “ambient commerce”. The dawn of ‘ubiquitous computing’ was announced by institutions like Xerox Parc and MIT Media Lab at the turn of the millennium and depicted in films such as Minority Report. ‘Ubicomp’ claimed that computational intelligence would migrate from the desktop and weave seamlessly into the fabric of everyday life – into our alarm clocks and coffee pots, fridges, newspapers and cars. A similar horizon was forecast in the future of payments at Money2020. According to many of the speakers, transactivity will soon migrate from the bulky point of sale terminal into the everyday environment. Payments will happen online, offline and everyware in between, with ‘behind the scenes’ and ‘in the background’ both being popular destinations. So too, monetary exchange will be ‘frictionless’, ‘seamless’, and ‘invisible’. To realise this vision, companies in the Money 2020 expo experimented with mobile wallets and phones as point-of-sale terminals but also RFID enabled wearables: jewellery, tags, labels and key fobs. Others focused on machine-to-machine payments. Gas tanks will automatically refill, groceries restock before you have a chance to run out of capers and your pool filter will place an order for chemicals to maintain optimum PH levels (because if you’re at the vanguard of payments privilege it follows that you might also have #outdoorheatedswimmingpoolproblems).

What’s interesting here isn’t only that the hype so closely matches those around early twenty-first century imaginaries of ubiquitous computing, but that this vision of the future of money – with payment embedded in every device and machine-to-machine payments as a matter of course – could drastically change not only what it means to ‘transact’, but ‘who’ or ‘what’ executes a transaction. Faced with the ethical and political implications of seamless technologies, ubiquitous computing quickly realised that a little bit of transparency can actually be a good thing. We’re faced with similar questions around ambient payments. Do we really want our monetary transactions delegated to our kitchen appliances or disappearing into the environment?

Another aspect of ambient commerce looked to bring the data tracking and monetisation capacities of online and mobile environments to bricks and mortar spaces – what one VeriFone representative cheerfully dubbed “cookies for the real world”. A combination of mobile phones, Wi-Fi beacons, RFID and NFC enabled devices would also create brand new opportunities for monitoring and influencing customer behaviours, so in-store greetings like “welcome back John Anderton, how did those Gap button downs work out for you?” might not be a plot from Science Fiction, but coming soon to a store near you.

‘Money-like things’, an expression I’m constantly stealing from this article by Lana Swartz, was another focus of Money 2020, with platforms developing monetary tokens, vouchers, loyalty cards and credits that work just like money but are privately issued by multinationals and platforms rather than by the State. This included examples like airmiles, which can be collected and spent online, as well as mobile airtime, where pay-as-you-go phone credit is used as a form of domestic and international remittance. But the real focus, as Lana was keen to point out at Money 2020, seemed to be on the use of loyalty and identity as de facto currencies. Rewards and loyalty points were an undeniable focus of many of the panels. Large multinationals and payments companies like CurrentC are now issuing loyalty cards that accrue points from a variety of stores like CVS-Pharmacy and Wal-Mart, while Blackhawk Network and Stockpile have developed gift cards for purchasing stock options. Intermediaries such as Points and Manifold Technology are developing “loyalty currency” platforms allowing for fungibility between different rewards schemes, so that your Starbucks points might soon be good for your next car wash.

The focus here seemed to be on incentivising consumer adoption of mobile payments and developing value propositions that move people away from data-poor cash – encouraging a more wholesale surrender of consumer data and identity in return for new kinds of remuneration- call them rewards, loyalty points or gift tokens – that could be used to pay for goods and services. Alongside a wholesale push to “close the loop” for offline payments, the shift from cash to digital payments is also a shift away from publicly mandated money to all kinds of different private money infrastructures, as networks and private corporations issue their very own currencies and guaranteeing their worth.

What your things are saying about you

In a similar vein, a focus across panels on ecommerce, mobile wallets and consumer behaviour was on analysing the data generated by new points of transaction in order to provision tailored consumer and financial services. Incidentally, a cursory analysis of Money2020 registration and twitter data by Chase Pay indicated that attendees were overwhelmingly male, affluent, and concerned with oral hygiene products. Where data monetisation is already an established value proposition in developed markets, a trend at Money 2020 concerned the use of smart phone data from the adoption of Android, Huawei and Samsung phones in emerging markets to precision new kinds of financial services to the worlds un- or under-banked. The end result was a lot of touching speeches by Fintech CEOs about the poor and their urgent need for push notifications and financial assets.

As mobile payments become more significant in both the Global South and the Global North, companies were coming forward who specialize in financial services and credit offerings based around mobile phone data and machine learning. One company, Branch (formerly Kiva) focuses on data emerging from the growing use of smart phones in Sub-Saharan Africa. Branch leverages social and transactional data based on the use of services such as M-Pesa and Facebook to produce credit ratings and to offer tailored micro-loans to its clients. Kabbage, which specializes in small business loans and Vouch Finance, which specifically determines credit worthiness based on an applicant’s social network, were just a few more similar companies with wares at Money 2020. So what kind of data is most important for determining future credit worthiness? Most companies were reluctant to say, unsurprisingly, although a Kabbage rep claimed that there were 5000+ different data points informing lending conditions and credit scoring on their platform. Others claimed that the machinations of their “robot in the sky” weren’t directly intelligible to their human underlings. While things like social media and network affinity data were mentioned alongside obvious elements such as timely money transfers and bill pay, the general consensus was that more traditional scoring methods such as FICO were not out of the picture just yet. And yet, the implications of this is that our payments devices are producing not only new kinds of access for the unbanked, or new kinds of ease and flexibility for those with ready alternatives, but also producing new kinds of identity-based monetary systems, and with them, new credit castes and financial instabilities. 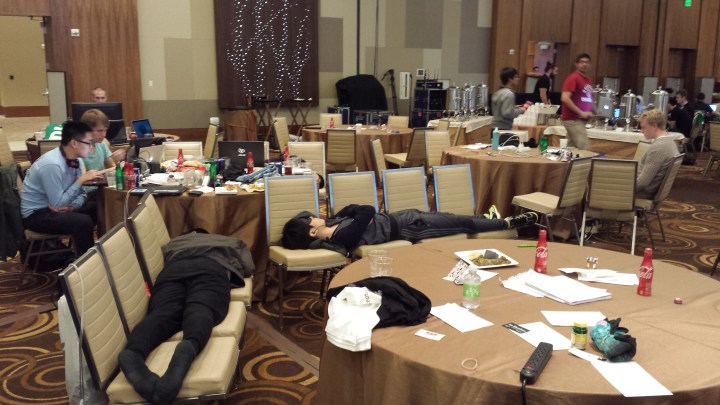 Being sure about things

What about alternative currencies in the future of money and payments innovation? Bill Maurer told me that just a few years ago, the Bitcoiners were on the borders of the Money 2020 conference, slinking around the exhibition hall like sulky emo teenagers and grafittying the PayPal stands with not-so cryptic missives like ‘Bitcoin is here’. Today, they’re very much part of the status quo, developing partnerships with banks and multinationals by day and appreciating the kitschy delights of strip clubs on the Vegas strip at night. Of course, it’s difficult to tip in Bitcoin.

At Money2020 the cryptocurrency focus was less on imaginaries of ‘blockchain quantum teleportation’ as David Birch put it and more on using private blockchains for greater asset liquidity. Far from the aspirations of more egalitarian approaches to property and governance, this was about using a distributed ledger for the digitisation of physical assets or for new kinds of digital rights management. Unsurprisingly one of the more successful articulations of the blockchain has been Everledger, a company that records the characteristics and provenance of diamonds. Colu, present at Money2020, describes itself as the “new value layer on top of the Internet”, allowing users to transfer any asset onto the blockchain. The company’s presentation featured a demo from thirteen-year-old developer Jonathan Ohayon, who had devised a smart lock to keep his five year old brother away from his favourite computer game. Mostly Colu is using the ledger to trace the provenance and authenticity of objects, digital files and data. The approach is similar to the Mycelia platform described here. Others suggested that the Blockchain would be used to authenticate and track the provenance of vast swathes of data produced by the Internet of Things. Another significant proposition had to do with automatic credit clearing between banks using private blockchains. During Money 2020, for example, NASDAQ exchange announced a partnership with Chain to use a blockchain-based system for automatic credit clearing and trades between banks and other private companies.

No thing to hide?

Alongside the plentiful talk of securing mobile payments and being sure about data at Money2020, there was a notable absence of talk about the privacy implications of these new payments networks. Instead Money2020 was the kind of corporate environment where a panellist from the Fast Identity Online Alliance (FIDO) could cheerfully extol the potential applications of their new biometric identification system for citizen authentication without any of the thousands-strong audience seeming to bat an eyelid. Instead, ‘privacy concerns’ centred on securing sensitive and valuable data from theft or corruption as it moved between different payments systems, with a lot of talk devoted to the introduction of biometrics for mobile, new kinds of identification and authentication for users and global standards for the tokenisation of data. Only one company, Privacy.com, were using host card emulation to develop tools for consumers to “keep [their] personal details personal”. In general when privacy did come up it was framed as a slightly quaint notion, something that people born before the new millennium were a bit worried about.

Moneylab 2020 was a fascinating insight into the vanguard of payments and financial innovation. It was also something of a wake-up call to attend a trade show on money as opposed to an academic conference, workshop or festival about the positive socioeconomic potential of Timebanks and cryptocurrencies. With companies like PayPal, VeriFone, Google, Visa and Apple at the helm, this is what the future of money may well look like. And rather than despairing, I think it drives home the importance of critical projects like Moneylab.