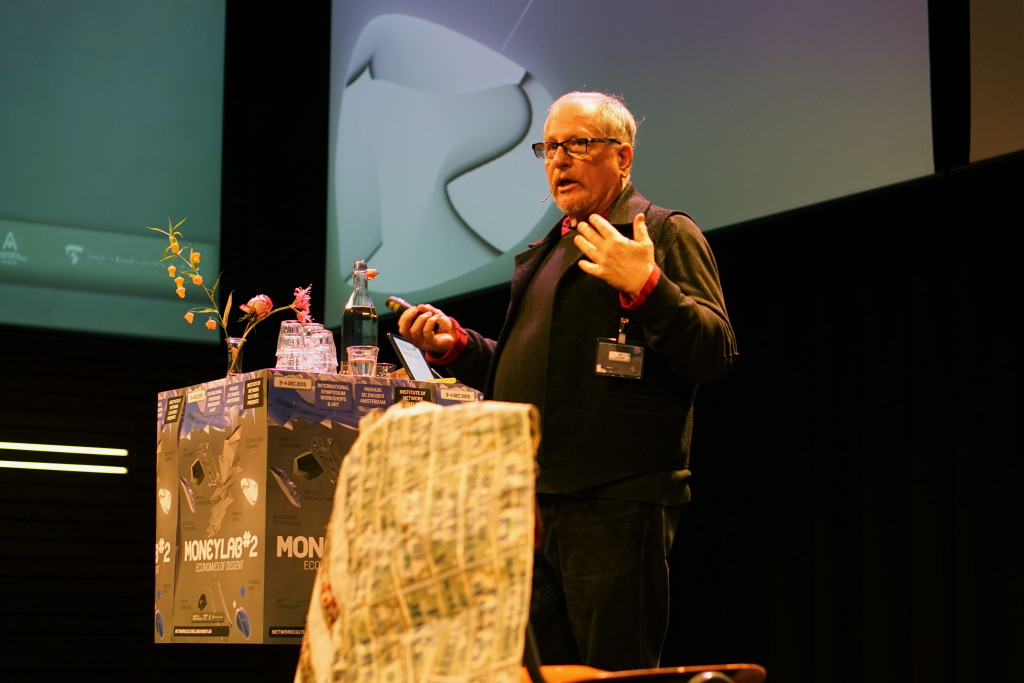 During his workshop at MoneyLab#2: Economies of Dissent Jim Costanzo, associate professor of Photography and Fine Arts at the Pratt Institute and founding director of the Aaron Burr Society examines the different facets of resistance and financial revolutions through alternative austerity movements.

Costanzo’s Free Money Movement was one of the many artistic economic protests to take place during the Occupy Wall Street movement. Costanzo’s ideal financial shift includes the Commons, and would be a system that would, provide government funding to local organizations, thereby encouraging greater financial investments in public goods. Costanzo posits the following question during the group discussion: Can the Commons exist within Capitalism?

“Paper money is ridiculous on another level.”

This question naturally spurred discussions about socialism and whether a system standing somewhat between the two could exist. One passionate audience member exclaimed: “But there’s nothing wrong with socialism!”

In Costanzo’s view, a new economic system would examine the question of infrastructure and would work towards a system that would set out to benefit the greater population, rather than a number of elite groups. It would work towardsinvesting in the commons, in a way that would demand a necessary rebuilding
of modern capitalism. Through his activist work, he seeks to bring attention to the flaws of the current
financial systems we live in both in the United States and inEurope. He seeks not only to find ways in which we can change and improve the dynamic between the people and the economy, but also to inspire us to reflect on what he calls “the idea of what value is, the idea of giving your freedom away.”

Such a reflection would enable a profound philosophical shift in the way we are accustomed to relate to money and the institutions that manage it.