Bringing the Dark Side of Money to Light

Paul Radu is an investigative reporter and the executive director of the The Organized Crime and Corruption Reporting Project. Radu opened his talk with the presentation of “The Russian Laundromat”: a complex system for laundering more than $20 billion in Russian money stolen from the government, with the involvement of Latvian banks, corrupted Moldovan judges and a cousin of Vladimir Putin. 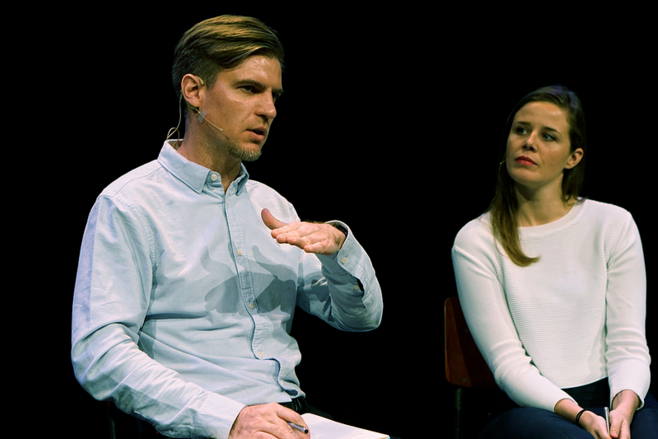 Today, a maze of companies and agents involved in a criminal infrastructure worldwide forms a global “criminal service industry”. Different organized crime groups from Russia, Moldova or Romania use same “proxy platforms” — systems built on thousands of phantom companies that only exist on paper, and are run by human proxies.

Creativity behind the design of such platforms should not be underestimated. In fact, says Radu, we should learn from criminals by analyzing their strategies and applying them ourselves. “They have meetings just like this!”, he exclaims, pointing at the MoneyLab stage. “They hold conferences on how to avoid taxes. They even publish books.”

Fascinated by creativity of criminals that he follows, Radu points out that lack of imagination can become a problem for journalists. When it comes to making investigations public, design and visualization also have a crucial impact on how information will be perceived. Looking at fellow panelists Femke Herregraven and Paolo Cirio, he tells the audience that artists just like them are needed to build a visual layer on top of dry journalistic data and create an accessible narrative for these stories.

Although artists remain safe working with such information, journalists are the ones who can get into real trouble. Compelled to work “on the cheap”, Radu’s team uses accessible encryption services. Even though Smari McCarthy, a famous information activist, gave them a helping hand with cyber security, Radu and his colleagues often face direct consequences of their investigation. From hacked mailboxes, legal threats from oligarchs, massive DDOS attacks to actual physical surveillance or imprisonment. But it’s all worth it, once you witness the effects of your investigations. When a bank that he once exposed is now on sale. Or when one of the countries involved in the scheme actually shuts down its crime chain. Or when the criminals themselves start to respect you.

Criminals often become Radu’s sources: after being exposed, they keep in touch and start providing evidence for other crimes. Saying that, Radu and his team don’t believe in local law enforcement: criminals move much faster. Creative criminal infrastructure is layered across many frontiers, spread over multiple jurisdictions, regardless of ideologies of the states it involves.

What we can learn from criminals is that we should start thinking beyond frontiers, beyond families and beyond nation-states.