I’m an Artist, not a Business Person

And as an artist, Scott Kildall emphasizes that everything is tradable, even human feelings. On his website Scott Kildall describes himself as a cross-disciplinary artist who writes algorithms that transform various datasets into 3D sculptures and installations. At MoneyLab#2 he presents his project EquityBot, an automated stock-trading algorithm that uses emotions on Twitter as the basis for investments in a simulated bank account (for more info click here). Equitybot monitors emotions by using sentiment analysis on twitter, emotions – such as anger, joy, amazement – are turned into data visualizations. Equitybot then correlates the rise and fall of certain feelings with the rise and fall of shares of some of the biggest trading companies on the stock exchange. Boldly, the algorithm ‘buys’ and ‘sells’ based on the emotions of twitter users highlighting the human emotions behind high frequency trading. EquityBot makes direct correlations between the feelings of twitter users and the shares of multi national corporations. What does that say about professional managed accounts? Not surprisingly, Scott is often confronted with the notion that EquityBot does not seem like an art project, but an innovative stock-trading algorithm. Scott himself sees it as a ‘conceptual project that appropriates the system of finance and uses its mechanisms to explore language and emotional states’.Moreover, the project retains its artistic agency because there is nothing being sold; it is monitoring and circulating emotional data into stock market shares and capital. 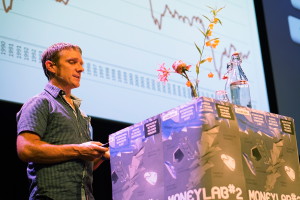 “This is whereas my place as an artist comes in. Stock market investors are seen as musicians, as mystics with some secret intuition of power that we do not have. Ironically or strangely enough this is the point were an artist can come in and do the same thing. So for Equitybot I saw emotions as common currency, we all feel them and the stock market does response to emotions in some way and the stock market knows about rationales. So there seems to be some push pull between image, model and reality.” (Kildall, 2015)

Unlike thousands of investment management firms everybody is able to see what EquityBot is doing. Sometimes people ask him ‘how is EquityBot doing’? Scott smiles and says that the answer is really really well, about 18% which is over double what the average stock investor receives per annum (7%). It comes as no surprise that Scott firmly believes that artists can make stock trading algorithms that out perform the financial sector. Scott closes of with the notion that some of the further projects of EquityBot could be to involve real money, everybody could invest 20 euro and enjoy the profits. After all he is an artist and not a businessman.