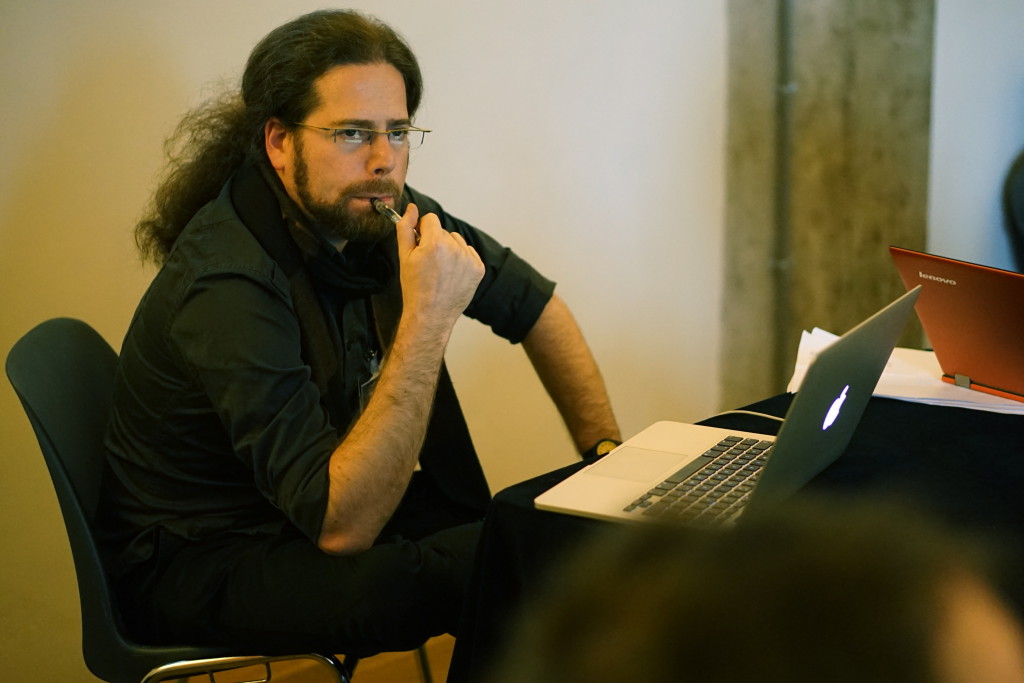 The “Avenging Money” workshop on Thursday afternoon was guided by Max Haiven, a writer and Assistant Professor in the Division of Art History and Critical Studies at the Nova Scotia College of Art and Design, Canada. His research focuses on economic and political studies applied to society and culture. This workshop analyses the perception of currency and how through looking at the emotional value of money we can develop tools to reconstruct financial and social models.
Haiven begins by discussing the current attitudes around money and the tendency of the economic, technologic, and artistic fields to gravitate towards technocratic explanations of money, as if it were a succinct code. Buying into this condensed concept results in an ignorance of the human fundament that makes all systems operate. Haiven asks the audience to join him in the thought experiment that maybe money is not fixable, and instead we can dwell with money’s imperfections by noticing that money is as flawed as the people who make it. “Avenging money” thus becomes not about storming the palace, but addressing the emotional economic landscape of money head on. Observing a fuller range of emotions around money may guide us to patiently sit with the imperfections of the economy.
In the experiment, Haiven asks everyone to retrieve, from their pockets or wallets, some money. A coin or paper money will do fine, and we are to hold the money to our ear and listen to what the money has to say. As if the money were a seashell containing all the noise of the ocean, we are to listen and record the message on a piece of paper. The notes are collected and redistributed and we are then asked to write a response to money.
As the audience converses with our currency, Haiven delves into the perceptions of money. Society views money as a powerful entity, but commodity fetishism in capitalism suggests that the set of social relations around money is what actually bestows power. A de-fetishized form of money would allow society to negotiate and manage networks based on cooperation.
To analyze a currency based on collaboration, Haiven discusses a parable of proto-capitalism and the use of monetary objects 400 years ago. On the eastern coast of Canada, the whelk shell is available for a short period during Winter. Native American tribes harvested these shells and made wampum beads, which would be strung on deer hide to give weight and materiality to treaties. The shells could be used as peace treaties between tribes or families, funeral sacrifices, the transference of power, or painted red and used as a declaration of war. European colonists misinterpreted the wampum as a method of currency and could not comprehend its use for specific, exceptional commodities. By extracting resources and demanding labor, colonialists negligently ignored the abilities of a commodity to negotiate social compositions. If a society wants to decrease the fundamental violence associated with money, a useful tool may be to alter the perception of money as something that will one day turn into something more than we can imagine. Today, society declares that many people can not have access to clean water, proper healthcare, or enough food and shelter simply because they do not have enough of a fetishized object. Considering currency as a medium for storytelling may aid humans in discovering how to cooperate better.
The messages we heard from our money was the super ego and the information cast by society around money. Our response to the message was the recasting. The workshop ended in the redistribution of the papers, where individuals read aloud and discussed the messages. Mine read “I’ve been all over the place,” with the response, “and now I’m here.”