The sixth session of MoneyLab #2 focused on bringing the dark side of money to light. How can we read and expose the abstract world of finance and its often invisible infrastructures, regulations, corruption and materials? And what could be the role of journalists and artists to allow audiences to engage with the dark side of money?

After the presentations of Paolo Cirio, Femke Herregraven and Paul Radu, moderator Cecile Landman introduces the panel discussion. She is curious to hear more about the kind of consequences that the speakers are confronted with, because of the sensitive material that they engage with in their work, and how they deal with these consequences.

Paul Radu explains that he has experienced real threats because of his work for the Organized Crime and Corruption Reporting Project (OCCRP). His team has not only been subjected by digital surveillance, but also by physical surveillance, as members have been followed and have been spied on. The team uses cell phones with double authentication, but cell phones are still being spoofed and people have hacked their Gmail accounts.

“In fact”, Radu states, “we would need the level of security that is only available to CEO’s, but we try to secure ourselves as cheap as possible with PGP and crypto phones. We often use our grants to cover cyber security. However, in some situations we need bulletproof vests as well. Still, our main defense is that we never touch personal lives in our reports; we always try to create a dialogue.” Radu explains that sometimes (former) criminals become sources for the OCCRP after their wrongdoings are exposed in reports.

Paolo Cirio is confronted with different types of consequences. Mostly people approach him informally by email, to ask if he can remove the name of their company from his work. There have also been legal threats, by high frequency traders, small and major companies and the Cayman Islands. Sometimes Cirio receives surprising reactions of people who are simply curious to know how he managed to obtain a particular document from their company. Or – once the name of a company has been removed – employees explain that they love his work, but that they don’t have the agency to address issues like corruption.

According to Paul Radu, we shouldn’t forget that a lot can be learned from criminals in terms of how to organize ourselves. Criminal organizations act much faster than any other organization. “They don’t care about frontiers. In this respect, one can compare these criminal networks with the world of science. They think beyond the borders of the nation state, and they don’t care about family or differences in gender.” In fact, criminals organize meetings quite similar to the MoneyLab conference, Radu states. “These meetings focus on how to hide money or how to avoid paying taxes. They also publish books about personal criminal stories to share strategies.”

The audience is interested to hear from the panel about their role as artists in working with the abstract world of finance. According to Paolo Cirio, artistic scenarios may help people to engage with data and abstract finance systems. “The first book and investigation about offshore financial centers was only published a couple of years ago. Even if we knew before that countries like Switzerland were operating in this way, we couldn’t do much because we lacked sufficient information. Now that more information is available, it’s important that people are able to actually engage with this information.” 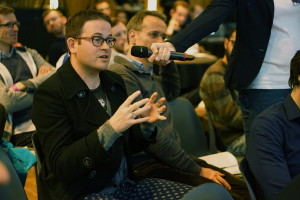 At the same time, companies and financial institutions do anything they can to keep the mystery of the financial world in place. “This is the terror of the financial sublime”, Femke Herregraven explains. “Conceptual metaphors such as earthquakes are used to describe financial processes. These metaphors seem to confirm that we don’t control or understand these systems. The question is how to go beyond the sublime of the financial world. Could we for example take an algorithm to court?”

In fact, the abstract ‘immaterial’ world of finance is based on an immense material world, Herregraven explains. The more invisible and immaterial financial processes become, the larger its material base. Her work Rogue Waves, refers back to the tally stick, an ancient mnemonic device to record and document numbers and quantities. According to Herregraven, these sticks may be absurd objects, but they can help us to think about possible (material) dimensions of our trading systems. “Art doesn’t have to be instrumental in a way that it exposes our financial systems, but it may allow us to relate to the invisible world of finance, through objects that tell a particular story.”