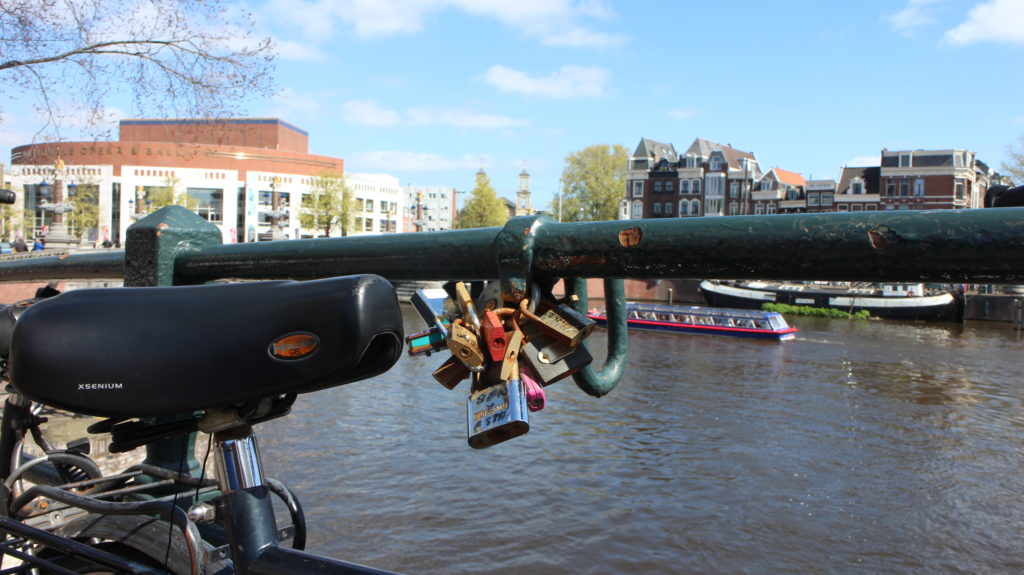 Last week I got married in Amsterdam, twice in fact. The marriages were part of a demonstration to show how smart contracts and blockchain technology can create user-generated contracts between strangers. We were taking part in a two day workshop led by Chris Speed from the Design Informatics department at Edinburgh University, who had invited us to design games on a new platform they had developed called Geocoin. The platform uses gps technology to map and circulate digital currencies within cities (currently Bitcoin, but could be used for any crypto-currency). It does this by creating ‘hotspots’; areas highlighted on open street maps that have a direct affect to the balance in your Bitcoin wallet. 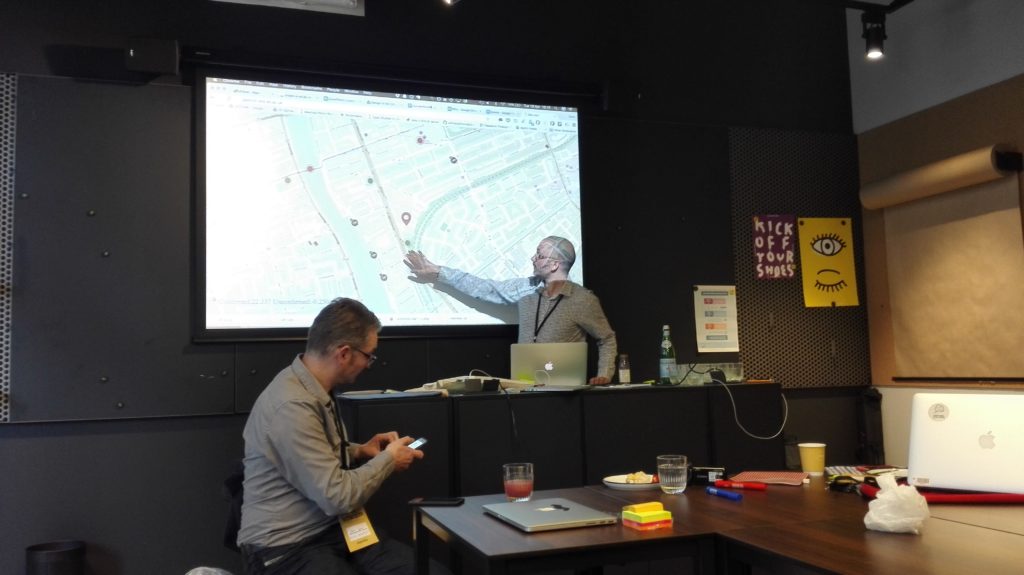 For example, whilst I could earn Bitcoins by standing outside Albert Heijn, I lost money by visiting the hospital. These basic examples demonstrated how blockchain technology could be integrated into physical places in the city to enable locative-based design that explores alternative distributions of value or exchange. But even these basic examples carried immense political and economic significance. By simply changing the rules you could create entirely different social economic constructs. Why should I loose money by visiting the hospital and be offered financial incentives to shop at Albert Heijn? 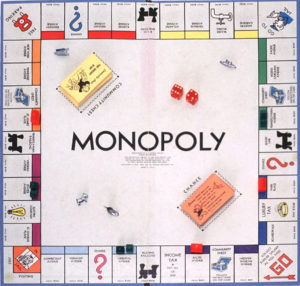 Experimenting with Geocoin created a sensation not dissimilar to that of buying houses and hotels on a Monopoly board and taxing your opponents for landing on different zones. When we were offered the chance to construct our own game, with our own rules in this world and suddenly we felt like overlords of the city, finding ways to launder digital currency to influence the cities population with our very own Bitcoin Monopoly. But this sudden sense of power was hindered by some stubborn social and ethical implications that immediately arose from discussing alternative economic exchanges within the city. What kind of trades do you want to facilitate? How can capital be circulated around the city in alternative ways? How do these alternative financial experiments change the behaviors of people in public space? 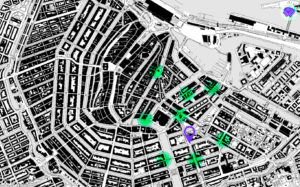 Fortunately we were primed with some small experiments within the workshop to prepare us towards developing our own game with the Geocoin software. We re-enacted transactions on the blockchain by exchanging different resources (wood, oil, water) and recording those transactions by signing our initials on small pieces of Lego that we placed onto a large block. As these pieces of Lego gradually built upwards like a game of Tetris, the towering structure was a material representation of the digital structure of the blockchain ledger. Whilst the majority of the group exchanged natural resources between each other, two people were assigned to perform the computer ‘mining’ – the cryptographic method used for verifying transactions – by solving countdown style math calculations. Re-enacting the confusing computational processes of blockchain transactions with Lego was very helpful for the group to find a common language and articulate their thoughts on this new type of digital, unregulated exchange. 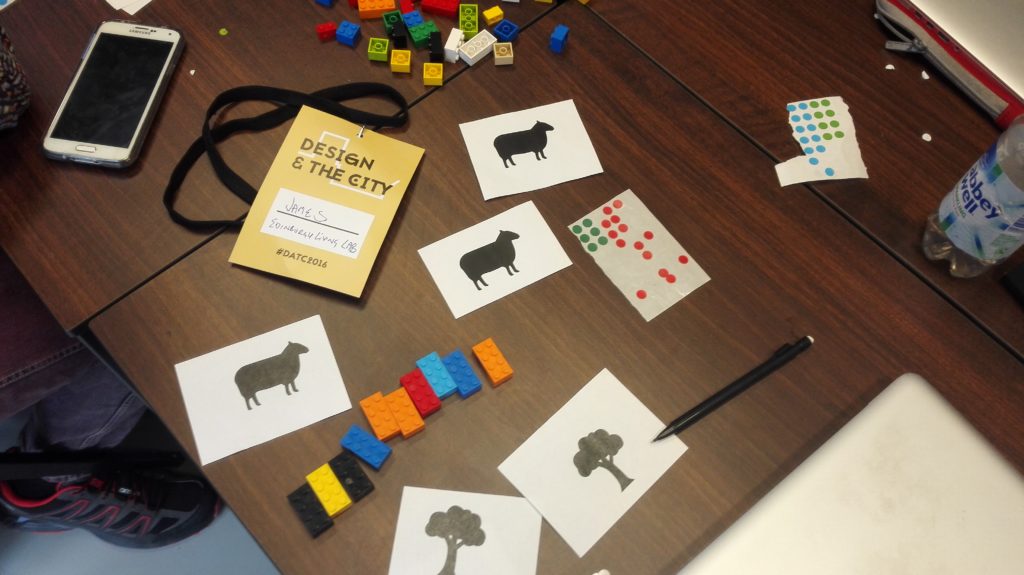 Popular misconceptions were ironed out as the game evolved into more open trading between the players and the freedom of unregulated currency began to inspire some radical propositions. I ended up swapping three sheep for a sponsored tweet endorsing the workshop before deciding to invest all my money into a collective pension fund with some of my peers. Just as the participants looked as if they were beginning to make sense of blockchain transactions and unregulated market trading, we were all allocated phones, sim cards, and sent outside to follow some dots on a map. After narrowly avoiding bikes and trams while staring at the radiating place marks on my phone I eventually began to see how these locations were increasing or decreasing a number at the bottom of the screen that indicated the balance of my Bitcoin wallet. Once we all returned we were given a more comprehensive explanation towards the relationship between the locations and amount of coins in our digital wallet. This is when the seemingly arbitrary locations (hospital, supermarket) began to have significant propositions towards the economic role of the citizen in a city. Gaining the power to distribute and allocate money to citizens through their physical presence in different public places connected the psychogeography of urban cities with the free-market utopia of Bitcoin. 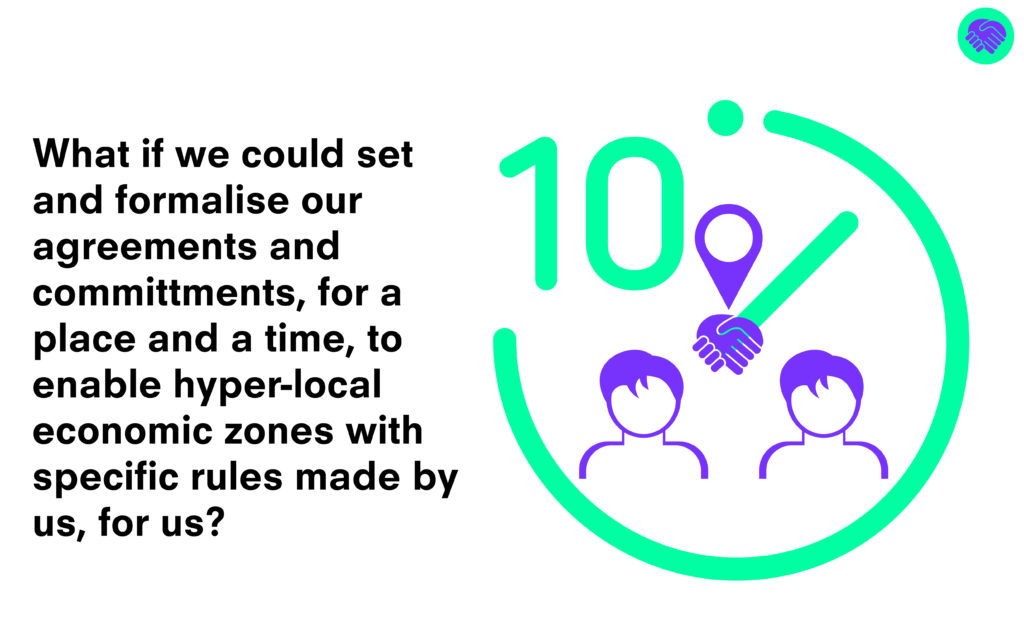 Being able to distribute money around a city to members of the public raises complex debates that cannot be solved by the roll of a dice. The opportunity to re-configure how digital money can be circulated within cities with the use of smart contracts did evoke some fairly questionable propositions that used the phrase ‘We can make people do this’. After negotiating some more ludic suggestions that used smart contracts to create temporary special economic zones in public space that we called ‘Tax Happy Hours’. Eventually we eventually arrived at marriage as a contract and a social economic bond that we wanted to appropriate from church and state and adapt it into a temporary mobile agreement that could be made anywhere, anytime with a mobile application connected to the blockchain.

Although the video demonstration mimics the guileless technological solutionist style that has become notorious with Silicon Valley start up culture, I believe the proposition of temporary shared funds between people in public space, is note-worthy for adapting the marriage contract into a handy, mobile temporary service. Marriage, with all its connotations, can be whittled down to one of the oldest forms of contract that binds two people from two families to create financial security. Arranged marriages, short term fixed marriages or visa weddings all utilize the contract to secure wealth, security or freedom between different parties. We adapted the practical and functional aspects of marriage into the Geocoin platform to enable impromptu financial commitments between people in public space. When one overlooks the novelty aspects of the idea, I think there is a valid proposal (!) for creating self-reliant commitments amongst peers, similar to the concept of p-2-p insurance platform CommonEasy; where friends financially protect each one another via an online social network platform. 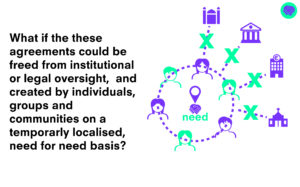 When given the opportunity to use money to direct, govern and manipulate behavior in public space many of the suggestions put forward seemed more oppressive than liberating to our access, rights and freedom in open space. It was remarkable how frequently mechanisms borrowed from popular online platforms, such as crowd-funding reward schemes or the reputation scoring of eBay or Uber are inherently incorporated into the design of smart contract systems. Very quickly a world is imagined where law is automated and people are governed by lines of code that use financial incentives to manage human behavior. Not all of the ideas suggested during the workshop gamified the city into a game of Candy Crush Saga. The other workshop group used the software to connect public protest with government spending. The numbers of people in a physical space could be counted to affect government legislation on spending – similar to the style of participatory budgeting that is being applied in Reykjavik in Iceland. Although we managed to get the short-term marriage working on our mobile phones, I think there will be a while to wait before everyone receives an invitation to create sham marriages for collective group financing. While you wait for your invitation, think about how you would change your city. How could digital money be exchanged between people and places, and what kind of city would this create?