Politics of the Cyphersphere: After the Blockchain Revolution 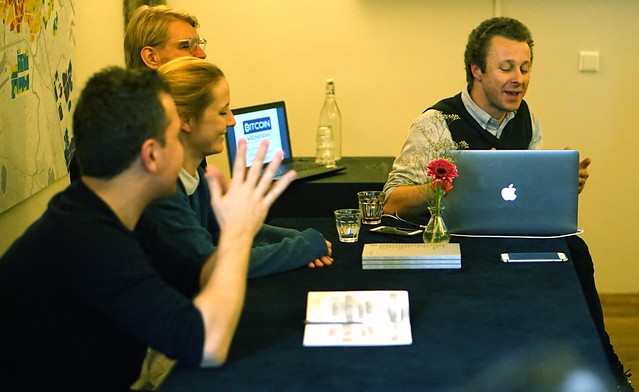 The Vienna-based Research Institute for Arts and Technology (RIAT) hosted ‘The Politics of the Cyphersphere – After the Blockchain Revolution’ and offered the audience an opportunity to openly discuss ideas, values and political discourse surrounding blockchain and crypto currencies.

RIAT – whose research consists of a combination of theory and practice, held a workshop that comfortably spanned the divide separating didactic and communitarian group dynamics. The workshop began with a series of short reactions to Timothy May’s 1988 ‘The Crypto Anarchist Manifesto’ from an array of notable figures within the field, serving both as a historically-grounded entry-point to the politics of cryptography, and also laying a fertile (and by no means homogenous) ground from which the latter, discursive section of the session grew.

Both Brett Scott and Martijn van Boven’s discussed the necessarily cyclical nature of analyses of emerging technologies – moving beyond ideologically rigid analyses and instead focusing on the behavioural tendencies of users in order to build a theoretical vocabulary regarding cryptography. Van Bowen gave a brief overview of his recent ‘Unmapping Europe’ project, wherein he aimed to begin the practice of restructuring of borders via money-flows. Richard Kohl’s also reminded us of real-world dangers that early crypto pioneers – such as Marshal McLuhan – were working to resist, as well as the present-day dangers the crypto community is facing.  Kohl’s contribution to the session focussed initially on the history of crypto – from digicash to occupy via the cryptowars – before launching into a series of “provocations”, most notably the dichotomous, (de-)instrumentalised perspectives from which the politics of technology can be discussed – the perspectives of Zygmunt Bauman and Marshall McLuhan respectively.

Scott discussed the Economic Space Agency’s on-going creation of a meta-decentralised blockchain of blockchains, responding to the “slightly lazy use of centralisation and decentralisation” within the blockchain community. Scott also highlighted the need for bringing about productive dialogue between the differing perspectives within the community at large. Scott’s discussion of the Economic Space Agency’s project was particularly pertinent, standing as an instantiation of the broader theoretical discussion that began the discursive element of the workshop. It focussed on the need to create a proper mode of discourse in order to lead communities away from simply recreating the infrastructure – and its corresponding, problematic power-structures – of existing cultural and economic systems. The spectre of Bitcoin arose at this point, which was used as a conversational placeholder for those projects which fall into a mere inversion, or transgression, of the infrastructural architecture they were created to resist. In essence, the ability to move past this mere repetition of both the undesirable embedded ideologies of existing crypto projects such as Bitcoin, and the emergent issues associated with zero-trust societies found in many crypto communities, appeared to be a questioning of whether communities could be incentivised via non-economic means.

Discussion of the emergent, real-world complexity regarding these possible communities led to a discussion of the need for specialist lawyers, as well as the need to divert from overly mechanised, technical language within these discussions. Dovetailing these disparate points into a final statement Matthias Tarasiewicz of RIAT spoke of the necessity for physical, non-automated critical spaces in order to even discover how to be properly critical in this regard; how to even have discussions that led to points such as these being raised. This call for de-mechanising the language used to build a critical discourse echoed the work of previous MoneyLab speakers such as David Golumbia, yet – contra to Golumbia’s focus on the inherent politics of technology via structural analysis – was floated in a far more charitable manner, in order to hopefully generate a much more optimistic vocabulary surrounding the emergence of Decentralized technologies.

Ironically perhaps, it appears that for those within the Blockchain communities, future discussion of decentralised platforms must at least partially take place physically, in a centralised manner, in order to stop merely recreating the political structures platforms – such as Bitcoin – were initially created to resist. The workshop served as a “blueprint” for Fiber’s upcoming Cryptolab in May, RIAT’s workshop was a welcoming call for future, critical, and interdisciplinary engagement with crypto projects, in order to begin to move forward in a more discursive and coherent manner.