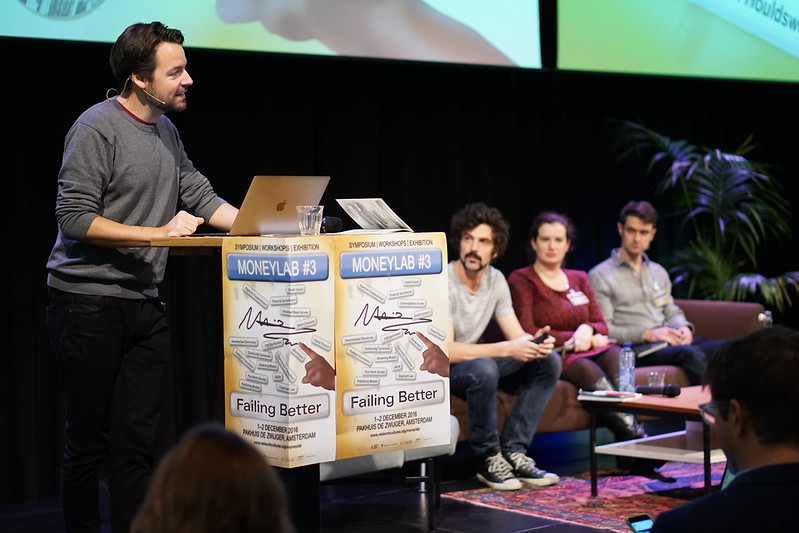 Before introducing the speakers, Nathaniel Tkacz – professor of Warwick University-  outlined three points currently shaping the discourse on monetary surveillance: financial data, payment interfaces and platform sovereignty. Financial data, or what Tkacz called  “ the perverse rise of surveillance as a service”, is actively re-entering our daily payments and financial  transactions. Enabling new economies of recommendation, it is asserting the positive image of surveillance. Money is becoming an interface and a designed experience, informed by behavior psychology and capable of acting upon an irrational user. Meanwhile Apple, Google and other financial corporations start acting upon users in sovereign ways, competing with the authority of nation states.

MoneyLab #3: Nathaniel Tkacz. Big Pocket is Watching You! from network cultures on Vimeo.

Brett Scott is the author of The Heretic’s Guide to Global Finance: Hacking the Future of Money (2013) and a series of articles on cashless society for The Guardian, New Scientist and Wired Magazine. Cash is commonly perceived as a proto-form, or a default image of money. Starting his talk with the Google image search results for ‘digital money’, Scott affirmed that people still struggle with its representation beyond cash flying through the computer wires. He exposed the problem of associating cash with illegal activities and tax evasion in the Panama Papers reports. “We start to combat black-market economy through stopping cash”, he stated, “while vast majority of black economy is happening in the banking”. According to Scott, digital money is mistakenly seen as a major update to cash, rather than continuation of the existing ledger system. Scott claimed that ‘a cashless society is a bank payment society’, and digital interface is just a different means of communication with a ledger. Scott brought up an ongoing war on cash and the attempts to marginalize it, initiated by VISA’s campaign under slogan “Cash-Free and Proud”. Cashless society will introduce new elements of financial exclusion, affecting the poor and those who don’t fit in a bank’s profitable profile. Furthermore, traceable transactions will result in a loss of privacy and correlated self-censorship. “What if cashless society is just an accelerationist dream, making us all dependent on electronic money? If so, it only takes one person to rip the power grid, and you have complete anarchy”.

MoneyLab #3: Brett Scott. Big Pocket is Watching You! from network cultures on Vimeo.

First They Came For The Poor

The poor and the marginalized members of western societies have been under governmental surveillance programs for decades; although this fact has often been taken for granted. Delving into the history of U.S. welfare, Nathalie Maréchal (senior fellow at Ranking Digital Rights and an advocate of privacy and freedom of expression) highlighted shifts in public perception of a welfare recipient — from a white widow to lazy deviant black mother, stigmatized by Ronald Reagan in the 1960’s. While technologies of surveillance were advancing, welfare reforms such as Clinton’s ‘Work Opportunity Act” in 1996 were mainly designed to send a message to the poor about personal morality rather than actually tackle poverty. The mechanisms of welfare surveillance include drug testing, ‘bed checks’, home visits and data matching, and cost five times more than benefits generated by their results, claimed Maréchal. Another problem is insufficiency of statistics on poverty and associated ‘risky behavior’. Maréchal argued that rather than focusing on spending levels, these programs should study the benefits and social effects of welfare.

MoneyLab #3: Nathalie Marechal. Big Pocket is Watching You! from network cultures on Vimeo.

The session continued with a passionate Skype call with Surajit Mazumdar, professor of economics at Jawaharlal Nehru University. Mazumdar addressed the Indian Prime Minister Narendra Modi’s recent abolishment of the 500 and 1000 rupee. The official motive propagated by Indian government is a fight against black money and fake currency circulation, but according to Mazumdar, it is in fact a disguise for a move towards cashless society, which is extremely beneficial for the corporate sector, a protégé of the recently elected government. While black market continues to thrive within the banking system, the “insane” move by Modi hits poor precarious workers who can be seen queuing up in long lines outside banks, attempting to change their money before it’s too late.

Geert Lovink and Brett Scott in conversation with Surajit Mazumdar from network cultures on Vimeo.

Financial Witness – Investing in Rehabilitation in an Actuarial Age

Emily Rosamond is an artist, writer and educator holding a PhD in Arts at Goldsmiths. Her work investigates implications of predictive analytics and value of social engagement in contemporary art. In 2010 a new financial product emerged on the market: a social impact bond. It allows business to have direct investment into social impact programs and charities, such as ex-prisoner rehabilitation. If the social project is judged as a success (using analytical metrics to record impact)  the investor receives a payoff from the government thus giving poorly financed social projects a financial kickstart through private investment. The seamless alignment between investors and beneficiaries has drawn Rosamond’s interest towards work of Michel Feher, philosopher of neoliberalism who coined the term of “investee activism”. “Previous generations of liberal-era activists, such as unions, focused on the employer as a source of oppression. That’s no longer sufficient for a neoliberal financialised context,” stated Rosamond. “We need to understand ourselves as investees and find new ways to produce investee activism.”

Rosamond took a different stance on financial surveillance and surveillance capitalism by introducing the concept of the financial umwelt: the sensorial experience of an inanimate object. Alluring to a book by Thomas Bridges “The Adventures of a Bank Note” (1770), she suggested to look at the world from the perspective of money: a non-human actor that has access to the real-time flow of public  life. If machinic perspective of investment is deeply embedded in our world, in what ways does is affect contemporary art practice in respect to social impact and volunteer activism?

MoneyLab #3: Emily Rosamond. Big Pocket is Watching You! from network cultures on Vimeo.

The first project presented by Austin Houldsworth (a researcher within the Design Interactions Department at the Royal College of Art (RCA) and co-founder of the ‘Future of Money Design Award’) is a sarcastic take on the argument for cashless society. He suggested a system in which British people would have to pay an excessive 20% of each transaction in exchange for their anonymity. Further, Houldsworth took the audience into the world of science fiction in attempt to “develop radically different notion of money”. Diving into dystopian novels, he drew on fictional monetary systems and reintroduced them into the real world in a form of public interventions. For example, In Yevgeny Zamyatin’s sci-fi adventure “We”,  a huge collective structure controls access to cities and holds citizens hostages of their public duties. Inhabitants of rogue states appropriate weapons as payment devices similar to Orwell’s “1984”. Can science fiction challenge the collective imagination to alter and transform the imminent  abstraction of money in the Cashless Society?

MoneyLab #3: Austin Houldsworth. Big Pocket is Watching You! from network cultures on Vimeo.

To conclude the session, Tkacz addressed new banking interfaces such as Monzo and noted the current re-imagination of banks as platforms accessed through API services. Scott responded with a suggestion that we need to conceptually split interfaces (ways in which we touch the bank) from the core of the banking system, comprised of transaction logs and risk management experts. Another issue is how surveillance model affects the ‘rated PG’ economy such as porn, and other areas closely linked to a moral question. What happens when Internet Of Things’ wet dreams come true and your fridge starts buying milk from a passing drone, fully automating your decision-making process? When Money is cashless and payments are embedded into our architecture will the traditional distinctions between banks and cash remain? How will the bank as interface instate new structures of corporate surveillance on citizens?

MoneyLab #3: Big Pocket is Watching You! Q&A from network cultures on Vimeo.