By Leila Ueberschlag and Max Dovey

The University of the Phoenix

On the evening of December 1st, the living (not-yet-dead) participants of MoneyLab #3 were invited to a special event during the evening program. They attended the first eulogy for excellence convocation celebration hosted by the University of the Phoenix, the top-ranked nomadic for-prophet business school dedicated to training the dead and the not-yet-dead to rise up together against the powers of financial capitalism.

The University, which focuses its curriculum on radical financial literacy and also provides a revenge consultancy, is administered by the artist-activist Cassie Thornton (vice-President of Paranormal Experience) and researcher and writer Max Haiven (Vice-President Academic Divination). One of the University’s goals is to organize site- and context-specific educational encounters where the dead and the living can collaborate on developing radical financial literacy to take revenge on global capitalism.

The University of the Phoenix is dedicated to educating the dead; with the assumption that if properly trained, they can offer a unique insight in economic and financial problems with millions of years of experience.

“Did you know that all the wealth in this world, that surrounds us now was created by dead people or people who are assumed to be dead?” asked Max Haiven in his opening speech. “As long as we keep failing to invest in the dead, the capitalist economy – as we know it – will roll on and roll out and make ghost of us all. The empire of alienation already going on make living ghosts out of most of us and that’s no way to live, in fact it’s no way to die.”

He then told the audience one story of a significant encounter he had with the deceased Benjamin Walter.  Quoting “Theses on the Philosophy of History” (1940) from the German Jewish philosopher and cultural critic, Haiven explained that our debts to the dead is more than just a financial obligation… We are the dreams of the death.

There is a secret agreement between past generations and the present one. Our coming was expected on earth. Like every generation that preceded us, we have been endowed with a weak Messianic power, a power to which the past has a claim. This claim cannot be settled cheaply.” (Theses on the Philosophy of History, 1940)

“For Benjamin, the living and the dead need to collaborate in order to keep the dreams alive and active in the world today”, said Haiven. Today neoliberalism constantly promise future prosperity for our grandchildren, as a reward for embracing the so-called end of history. “We need to find a spark of hope in history”. 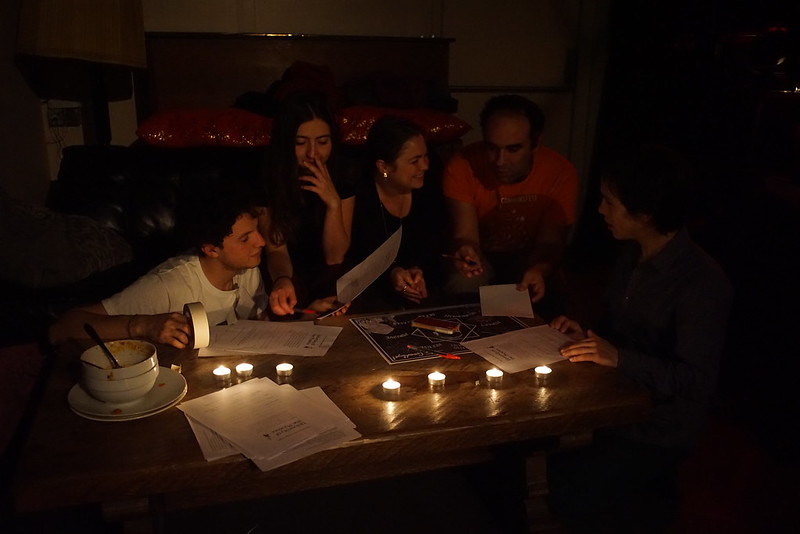 “What is debt after all but a ghost, an intangible immaterial haunting presence? What is money except the solidified spirit of those whose past labor and energies to build the beautiful world that is around us right now and all the value in it?” asked Haiven. “Whether you are haunted by personal debts, or whether you simply feel the debt of this historical moment weigh on your shoulder like an impossible weight. The University of the Phoenix offers you a rare opportunity to consult, tonight, with the no longer living as a mean to help you reimagine what is possible, to help your spirit of neoliberalism die and to reborn”

Thanks to a state-of-the-art app, the University of the Phoenix’s students could speak to the living and bestow financial wisdom from beyond the grave. “Our researchers have been developing this financial technology for millennia and we’re thrilled to be debuting the prototypes at MoneyLab,” said Haiven.

The evening’s highlights included the awarding of an honorary doctoral degree to Hannah Arendt, one of the most influential refugee thinkers of the 20th century. Arendt’s work connects totalitarianism, evil, economics and imperialism, themes very important to the university’s graduates. 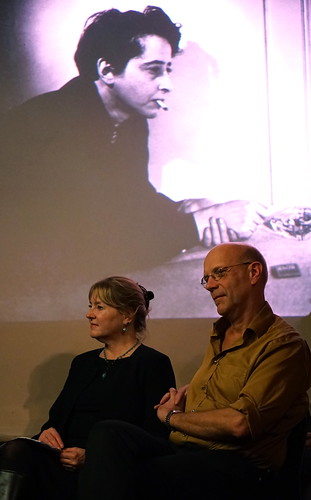 The spirit of the honorary degree recipient was invited to give a speech, with the assistance of Dawn Lueck, a gifted medium and anti-debt activist. She was joined by media and finance scholars Geert Lovink and Joyce Goggin, who helped to interpret the spirit’s message. Geert Lovink took the opportunity of this unique encounter and shared with Hannah Arendt’s spirit his concerns about today’s  meaning of democracy  – amid recent international developments, such as Brexit or the election of Donald Trump. “What is politics?” he asked her and continued: “Is there space for us to act? Can we do this in the classic framework you have studied and advocated?  Is the promise of a democracy and a separation of the 3 “s” politica, with a separation of the spheres, still possible today? In one word: What is politics today?”.  Arendt’s spirit answer as short as direct: “Get off your ass”!

The night culminated with the ritualistic awarding of a scholarship, given to… Donald Trump. “A person worthy of immediate enrolment at the leading University for the dead, in the hopes that they will liberate their spirit from its fleshly prison and make more positive contributions in the next life” said Cassie Thornton.

After a brief pause the artist collective Fine Art Finance Lab initiated one of their funancial exercises, The ‘Thermometer Game” with the remaining MoneyLab audience. After everyone had become settled in the candle lit ambience of the séance it was pro-active to get everyone standing up round a square that had been drawn on the floor. The three performers from FineArt Finance Lab then proceeded to ask the group questions about Money and each question required the group to perform a response, e.g.

“Does money make you feel powerful? If so kiss your biceps”

“Do you believe in Universal Basic Income ? If so hug the person next to you” 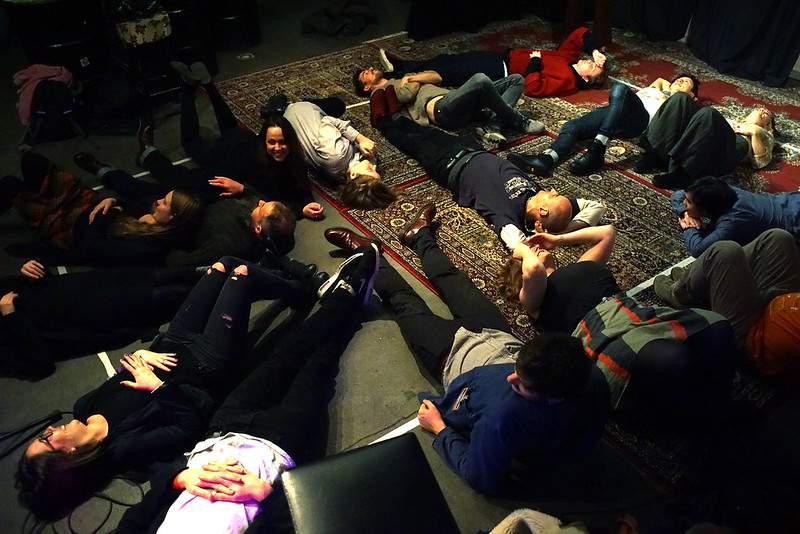 The game unearthed many primal feelings towards money and forced individuals to act them out and respond to them in different ways. It would be very effective as an introduction task to any group unfamiliar with each other or a work exercise for bankers who often have trouble expressing their deep feelings towards Money. The FineArt Finance Lab successfully extract very abstract aspects of finance and tackle them head on through performance, action and improvisation.

They also co-ordinated a special El-Dorado lottery for all the guests at MoneyLab during the two day symposium. By selling 1 euro tickets at the entrance, they managed to persuade 75 people to invest in their DIY lottery. After making a series announcements about the grand cash total and even devaluing a series of tickets due to “unexpected market forces” the group eventually gave one lucky visitor 74 euros in cash with no strings attached.  The FineArt Finance Lab reflects an intuitive and ingenious artistic approach for activating participatory exercises with money and finance.

The ‘Demi’ by Tori Abernathy 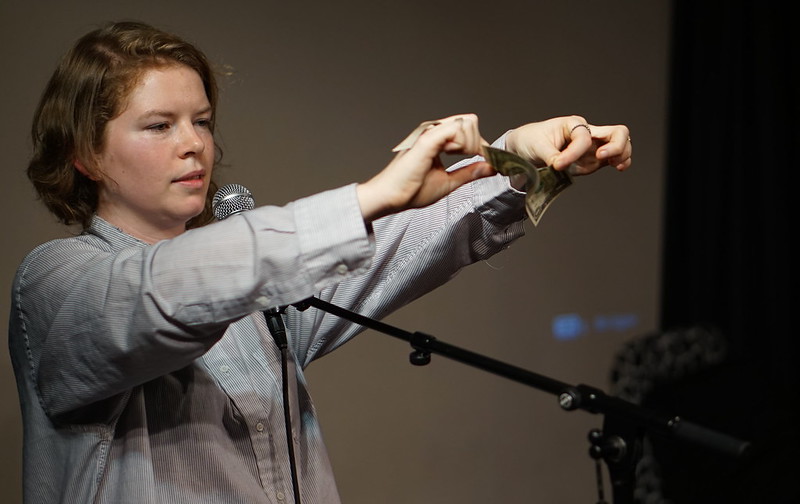 To close the night Tori Abernathy took to the stage to perform “The Demi” a 20 minute performance reading that imagines an alternative currency for future societies. Tori introduced a context in a not so distant future where financial collapse has led to a resurgence of financial activism and community infrastructures that are attempting their own economic survival, things such as basic income and complementary currencies become commonplace in this imagined apocalyptic dystopia.

At the end of the reading, Tori handed out 1 dollar bills to each audience member who were then invited to perform a symbolic ritual to enact the creation/destruction of the “Demi”. The word “demi” literally translates as “half” in French and the act of ripping apart the dollar in two represents a subversive act that has been used to appropriate the national monetary system into a community currency in some parts of Canada. Local businesses have begun accepting the ripped notes as lower denominators of common bills and the act of ripping them in half destroys one form of currency in favor for another.

In the context of the piece, the act of ripping a dollar in half was used a climatic participatory group ritual and was a fitting end to an extraordinary evening of spiritual finance art.