“Can the proletariat make a difference in macro economics?”

This was one of the questions that arose during MoneyLab #3’s first panel, “Global Finance: Failing Better?” moderated by Geert Lovink. The panel touched on ways that activists, artists and economists are engaging in large scale issues through localized and grassroots efforts.

The opening statements by Lovink touched upon the 2008 economic crisis, the refugee crisis in the European Union and the recent referendum and election in the United Kingdom and the United States respectively. The context of the discussion was the idea that we are, as an ever increasing global community, in a moment of great change and crisis. With the digitization of money and an increasingly gig-based workforce, it is also a moment of economic revolution. We are entering into unchartered territory economically, and we are becoming increasingly divided.

The panel began with words from Alex Foti, Milanese union and media activist, writer and founder of EuroMayDay. Foti sought to give revolutionary examples of how to meet the new economic challenges we are facing today. We do not, he said, want to repeat the aftermath of the Russian Revolution, their mistaken decision to kill money and replace debts.

By killing money, the source value function of money, or the possibility of exchange and transaction, died along with it, forcing Russia to revert to a barter system. Foti instead proposed a decentralization of money creation and the issuing of a new currency in order to abolish international capitalism. This universal currency would be supplemented by localized currencies, each tailored to the needs of their respective local economies. All of these complementary currencies would then freely flow against each other. It is from the local, he suggested, that we solve the global

Dutch artist Renzo Martens, while different in practice, likewise promoted localized action. Martens works with Congolese communities to answer the question: how can critique become a currency? He spoke about his work with the Lusanga International Research Centre for Art and Economic Inequality (LIRCAEI), located on the first Congolese palm oil plantation, which was built in 1911.

The LIRCAEI was created to answer the question: “How can artistic engagement with global inequality bring sustainable economic growth to one of the most disenfranchised places in the world and what could be the model for this?” Martens linked the forced labor in the Democratic Republic of the Congo to the funding of European arts and architecture.

Unilever, a British-Dutch company, whose products include personal care and cleaning products as well as food and beverages, funds the Unilever series at Tate Modern, whose well-known participants include Ai Weiwei and Louise Bourgeois among others. Unilever also owns several Congolese plants, whose workers are paid $19 a month. As Martens said, “critique is employed by capital.” The profits from the mass employment of underpaid workers is used towards art funding and critique, exposing the glaring irony in arts institutions of Europe.

How is this institutional dynamic reverted? How can the laborers become employed outside the “shut up and work” culture of plantation life? Martens proposes fetish. “Fetishes attract funds,” he said. And what is the most fetishistic of fetishes, the main object of capital? It is the white cube museum. Museums are known to legitimize their own contents; Martens joked that if you put a bottle of shampoo in a white cube gallery, people would give it respect.

The new LIRCAEI white cube museum in Lusanga, that the Rotterdam-based Office for Metropolitan Architecture (OMA) will build in 2017, will be managed by plantation workers and will validate whatever is put inside of it, as well as validating the settlement itself. It is this way, Martens said, that the plantation workers will subvert the oppressive commodification of their labor, and build a space where all can question not only how art is monetarily valued, but how the art market itself works as an oppressive force.

Cassie Thornton, a feminist economist and artist, similarly employs art to make change. Like Martens, she seeks to both reveal economic oppression and give those who are struggling a space for empowerment. Instead of labor exploitation, she’s focusing on debt, creating a bridge with Alex Foti’s earlier statement that “today, money is really debt.” So how do we fix this “adult” problem of debt? The answer, said Thornton, is to ask children. 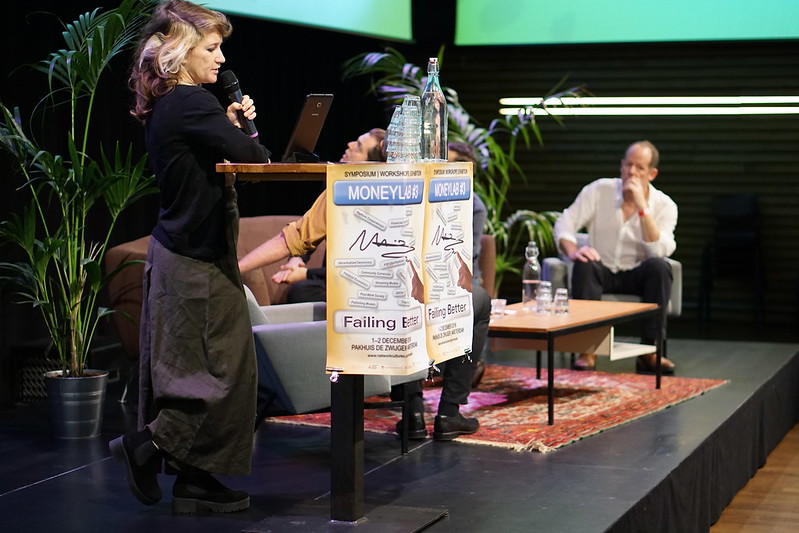 Thornton started the project “Mystery Hands” in June 2016 out of Chicago’s Gallery 400. The project, which seeks to deal with the paralyzing debts of the Chicago Public School system, began with visualizations. She asked adults and children to visualize debt. The kids connected debt with being invisible, but being real. It was something they recognized their parents talking about. While the adults answers were more concrete, and detailed, it was the children, who have not yet consciously felt the immobilizing burden of debt on their life, that Thornton asked to come up with a solution.

While Martens uses the white cube gallery as a validator, a way to reappropriate prestige, Thornton uses it as a playground. The two-part gallery space included one room accessible by all and a second, with a small entryway, fitted only for a child to squeeze through. The first room held a picture book about debt. The second room was where the children got to work – with the only set rule being that no adults were allowed in unless invited and all money was banned. The kids were given crowbars and told to destroy the space. Collaboratively and festively, the children punched through the walls, reconstructing their world, and breaking down the limitations set around them.

During this first session, the pan-European movement of democrats DiEM25 was also presented. Menno Grootveld talked about the the necessity to coordinate the small bottom-up and grassroots movements, which are rising in Europe. He described DiEM25 as a “network organization” that can facilitate discussions between these regional nods.

This panel, while different in perspectives and not free of arguments, was unified in its call for action. How do we, as individual and members of local communities, move forward in times of economic despair? How do we use our own jobs, skills and network to right wrongs and begin to patch up the world? How do we protect others and future generations? It is through grassroots efforts and experimentations, the panel argued. And when that doesn’t work, trying something else. In other words, learning to “fail better.”