The workshop Governance in the Age of Blockchains and Digital Currencies was a session organized by the Bitcoin Wednesday, a monthly conference on digital currency in the Netherlands. Founder of Bitcoin Wednesday and board member of the Dutch Bitcoin Foundation Richard Kohl opened the session by stressing the importance of critically questioning the different uses of blockchain technology by quoting the Canadian philosopher Marshall McLuhan: “A point of view can be a dangerous luxury when substituted for insight and understanding.” After his short introduction, he invited six speakers to present their projects and interests.

First up was Justin Bons, the founder of Cyber Capital: a cryptocurrency investment fund based in The Netherlands. Cyber Capital aims to conduct fundamental analysis to predict viable future developments in cryptocurrencies. Bons provided the audience with a detailed account of current heated debates in the Bitcoin community about changes in block size limits. Bitcoin Classic advocates pursue a static size of blocks of 1 megabyte, while Bitcoin Unlimited allows for a change in the size of blocks. Due to the deadlock of the discussion in the community, Justin Bons would like to see a split in the Bitcoin community between Classic and Unlimited supporters. This would mean that Bitcoin splits into two currencies, bringing more diversity to the market. He then made the remark that this possibility to fork proves the autonomy of cryptocurrencies: to not have to live under majority rule.

In his reflections on governance, Justin Bons noted that traditional governance includes what he thinks are ‘nasty’ incentives to create a form of trust. Crypto States do not have these kinds of incentives since the idea of trust is automated through blockchains. Bons closed his presentation with the remark that he does not see Blockchain as a static technology, but rather as an outcome of social interaction. It relies on human decision-making for continued operation and includes human elements, but it allows us to achieve trust without a centralized authority.

The following presentation was held by Emanuele Braga from the Macao Center for Art and Research in Milan. Founded in 2011, the Center has experimented with different forms of sharing economies, of which Emanuele Braga presented the development of their own cryptocurrency: Commocoin. Macao has created this new currency to revalue different tasks in the art center and to create a shared basic income between members. The organizational workload is distributed amongst its members, who get paid in Commocoins for their activities. At the end of the month, the organizations’ income is converted into euro’s and members receive their basic income.

The currency is created around a shared necessity of critical wage distribution within the organization: how to divide time and labor within an organization and circulate capital fairly. The implementation of cryptocurrency allows for a questioning of relationships in production and self-governance. After a question from the audience, Emanuele Braga explained their choice for using cryptocurrency. The idea was to produce a local autonomy within a larger structure. The use of cryptocurrency allows the organization to be in dialogue with international movements, while fine-tuning their system for local use.

Roberto Valenti from the University of Amsterdam (UvA) presented PROFΞTH, a demand based economy that connects blockchain, Artificial Intelligence (AI) and Internet of things (IoT) technologies. PROFΞTH is a project meant to understand what economic possibilities will come out of the combination of these three emerging technologies. Valenti described a market in which an online request for a specific service or product is made. Blockchain technology verifies the identity of both seller and customer. Geography is no longer an issue, although in many cases local economies will be favorable. AI will have a role in predicting and projecting prices and fluctuations in demand and can make price adjustments when needed. Finally, devices connected to the IoT will feed into the AI algorithms and give further insight into demands.

Roberto Valenti sees opportunities for PROFΞTH in places where no traditional economy is present, such as in refugee camps. Much like a digital timebank, refugee camps inhabitants will put their request for goods or services online, and people inside the camp will be able to respond at will. On the issue of governance, Valenti noted that in traditional politics we are able to -indirectly- vote on a government’s long-term policy. He believes that with the political possibilities of crypto-technology, perhaps we should be able to vote on specific algorithms. He sketched algorithms as a new form of politics that should, therefore, be included in the democratic process. 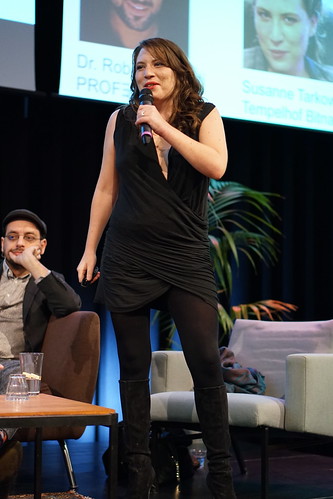 Susanne Tarkowski Tempelhof of Bitnation helped the audience in untangling the term governance in relation to blockchain. She recognized the use of the term in relation to the organization of the Bitcoin community itself but reminded the audience that blockchain technology can also be used to create new forms of governance. She was most interested in this second category. Established in 2014, Bitnation is the first blockchain nation of its kind. Through the use of the Ethereum blockchain, inhabitants are able to sign off marriage contracts, obtain birth certificates and engage in business deals. Bitnation obtains its security and trust through blockchain but includes a front-end that is based on the use of secure messaging services. Tarkowski Tempelhof explained that with Bitnation, users are able to create their own nation or join others when it benefits their situation.

She foresees a world in which governments are stripped to their bare minimum, and provide only the services that are necessary for basic citizenship such as the issuing of contracts. With digitization, jurisdiction and protection become the same thing. She ended her talk with the remark: “In what kind of nation do you want to live in 2026? A capitalist, communist, or socialist nation, or do you want to create your own?”

Social scientist on information law Dr. Balázs Bodó valued a critical assessment of blockchain technology and wasted little time on his individual presentation. He was intrigued by the belief in this technology, and the ‘hype’ and ‘bullshit’ surrounding it. He noted that as a society we have failed to make use of new technologies such as the internet to create societal change, and he hopes that blockchain technologies will not only be captured by major interest.

Bodó stressed that it is a misplaced trust to expect technology to provide autonomy. If we are not aware of underlying incentives that drive everything we are betting on the wrong horse with technology. In a broader discussion between the speakers and the audience, Balázs Bodó questioned Bitnation’s model of autonomous nations by pointing to the social structure that might take the form of paying taxes.

In an autonomous understanding of states, how to maintain solidarity and prevent the fragmentation of society as a whole? Justin Brodo’s indirect response was that fragmentation also means greater freedom of choice. His problem with the current free-market is that there is a lack of diversity. It is not about destroying majorities, but it is about creating alternatives ways of organizing an economy. Blockchain technology allows for a reinvention of the free market.

When asked for a final statement, Emanuele Braga expressed his hope for a flexible appliance of blockchain technology. This will ensure an autonomous position in a larger structure, where individual freedom is a priority while maintaining solidarity and creating a shared economy.