Tori Abernathy introduced the session by asking a few questions to the audience. “Are you able to say “no” when you need to? Have you ever profited of unpaid reproduced labor or underpaid productive labor by others?” Many people raised their hands.

Studies in the last decade have shown what it means to have a basic income: villages with improved social welfare programs can lead to an increase of productivity and enable more people to work in an area of their own personal interest. The advantage of basic income is that once people do not have to worry about covering their basic costs, they may be liberated to live a more fruitful life and not depend on what David Graeber calls ‘Bullshit Jobs’. This becomes increasingly relevant when jobs are no longer lifelong or full time; and automation quickly transforms transportation and the service industry, displacing large amounts of the human workforce with every new innovation. 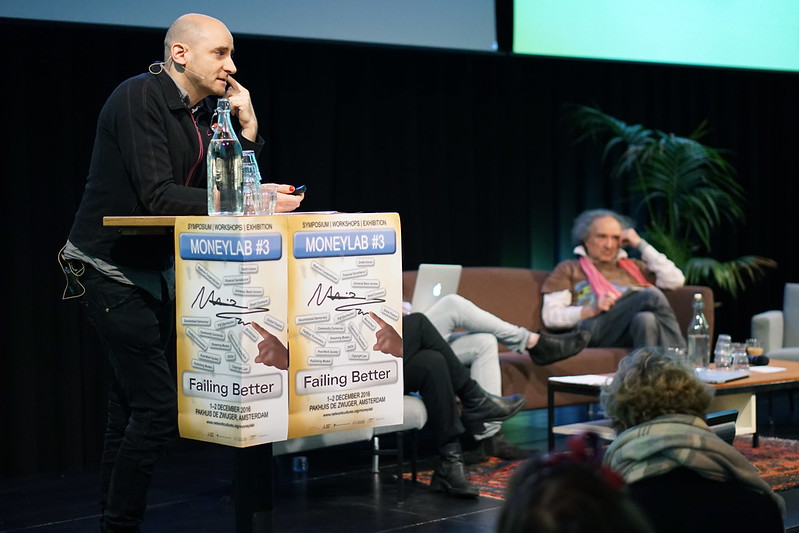 Germany is slowly changing its opinion towards basic income. Mein Grundeinkommen (my basic income) is a project where interested people can sign up for a raffle where the winner receives a monthly payment of 1000 EUR for the duration of one year. This DIY Basic Income experiment hopes to find out what happens if we, as a society, have the financial resources to focus on our life-goals rather than the demands of the market. “We would like to encourage people to trust each other more and indulge in a meaningful life. We are taking the basic income discussion beyond academia and into our everyday experience,” as it can be read on Mein Grundeinkommen website. Participants are asked to join the project and, in return, share their experience of having a basic income. Anyone is eligible to participate in the basic income raffle. However, in order to register, people must be over 14 years old. Younger children can participate via their parent’s account. Johannes shared with the audience the examples of two people who won a universal basic income. At the time of writing 66 people have already been awarded a basic income.

The second initiative presented by Johannes Ponader is The Sanktionsfrei project, which adopts a different approach than Mein Grundeinkommen. Sanktionsfrei offers money to people that are in need. A donation of only 40 EUR a year is enough to give the people the security to guarantee on a minimum level. People that support the project are called squirrels; and they can donate starting by only one euro per month. The project is another example of DIY crowdfunding social policy and testing it out with communities who can’t or won’t wait for governments to implement such changes themselves. 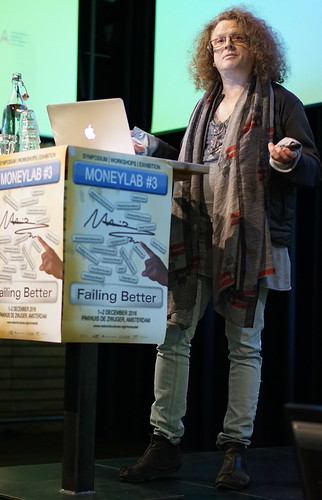 Baruch Gottlieb argued that UBI is a neoliberal plot that will actually make people less well off. He began by highlighting that Basic Income was originally a conservative idea introduced by non other than free market fanatic Milton Friedman. Fields such as health care, child care and education cannot be replaced by simply distributing “free money” and Basic Income would give governments legitimate reason to dissolve state welfare into a pay-per-use social service. Gottlieb argues that UBI is not the solution to unemployment, precarity and austerity politics and it will merely “raise the poverty floor”. This is due to the fundamental principle of Basic Income – that everybody gets the same amount, it is unconditional. For example, when everyone living in Amsterdam receives the same basic income , the economic inequality just raises up a few hundred euros and the class divisions remain the same. For Gottlieb, this dilemma prevents Basic Income from solving some of the social crises it claims to resolve and in some countries, it will harm what is (left) remaining of the welfare state. Gottlieb concludes by diminishing the prospect of basic income as part of the ‘acclerationist post-work economy pipe dream’ opposing the popular belief that a post work society and a basic income is the only answer to the labor crises.

Patrice Riemens spoke about the distance between theory and practice within these ideas of a basic income. As an example, he refers to Switzerland where it is recorded that 66 % of labor is done by women who make an interesting feminist case for basic income.  In this case a basic income will allow people to do work instead of having a job; work that is needed to be done, instead of fulfilling a job in order to exist. The insecurity of existence that a lot of people have will vanish. In Riemen’s opinion, Universal basic income should not be viewed as neo-liberal plot to make you poorer and will not be used as an excuse to cut all kinds of social services, because the minimum of basic income will not allow people to cover social services.

It was agreed that Basic Income could not solve economic equality, however providing this basic privilege could help solve the problem of precarity, but not banish poverty. Riemens concluded with the idea that a universal basic income in whatever form it comes, is still, better than nothing.

MoneyLab #3: Universal Basic Income, For One and for All? Q&A from network cultures on Vimeo.