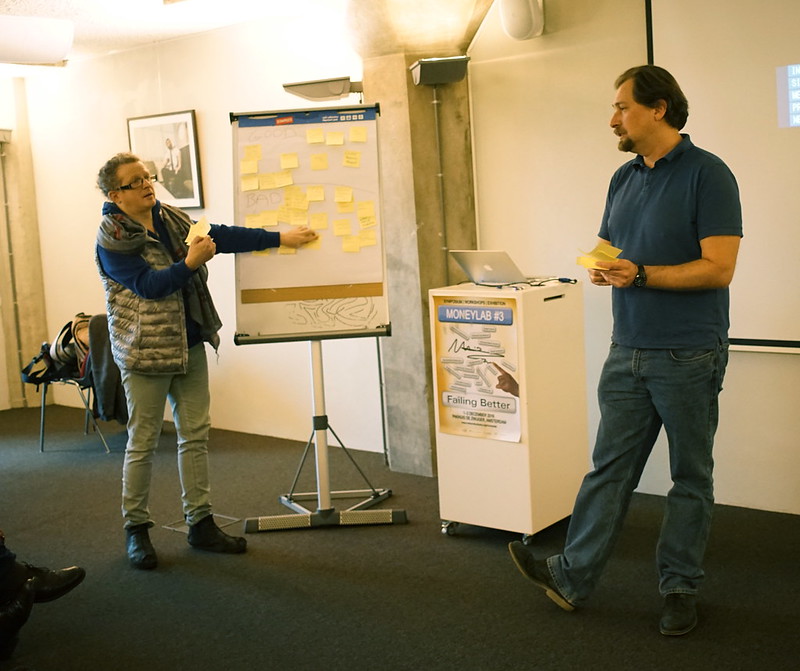 The workshop Prevailing Over Money, by Dmytri Kleiner and Baruch Gottlieb, was dedicated to rethinking the overall concept of “money”. Participants first examined the presuppositions related to the topic before discussing the question: “To which extent money is working and to which extent is it not?”

Participants wrote down their ideas, read them out loud and had to decide whether they were sharing  “good” or “bad” thoughts about money.

Some of the good sides of money mentioned by the audience included the notion that money can be used to pay and to stabilize rent (fixed prices) and that it is a valuable and practical tool, which can be used for many purposes. Participants also discussed the fact that money positively controls behaviors by defining the cost of things (to illustrate this, we can look at how the price of gas subsequently ‘controls’ environmental impacts); it can be a good tool for rewarding; it can bring safety against contingency (through savings) and it can be used to pay taxes and redistribute the wealth among society (for example public systems such as health care).

The downsides of money expressed by the audience encompassed the gap between the amount of time people spend working and the money they get in return, the sense of quantification/monetization, which takes money away (abstracting it) from the idea of social benefits; the fact that money obscures power relations and consequently facilitates inequality to grow. The others downsides of money discussed included the delusion of loans (which allow banks to decide who gets money in the first place), the interest rates on savings which create debts, the concept of buying money with money, wage slavery and the conclusion that not all social outputs (for instance intellectual and/ or artistic output) are calculated well by the market.

Although the level of “goodness” and “badness” of money was hard to evaluate, the attempt to classify these thoughts opened up room for interesting discussions on the consequences and further implications of such opinions.

After having expressed their concerns about money, participants categorized these concerns into diverse topics:

Within the “good” sphere there was: [1] Universality/ Customer choice; [2] Taxation/ Redistribution of Wealth; [3] Anonymity (should finances be private?)/ Subversion; [4] Money as storage of value/ Time-shifting; [5] “I’ve earned it”.

Within the “bad” sphere: [1] Exploitation (to not get paid value for work); [2] Free to be unethical; [3] Financialization/ Speculation; [4] Entrenches Inequality; [5] Unfair debt.

Having these topics in mind, the discussion was split up into smaller groups. The time was then used to deliberate and prepare a presentation or a “call for action” on a specific shared concern or urgent matter.

The first group proposed two “calls” for action. The first one asked people not to save money and raised the following questions: “what would happen if no money was saved, but instead absolutely and constantly in circulation?” Would a collective fund or one enormous shared bank account emerge as a result?

The action plan proposed: give away or abolish saving in order to create flows of money.

The second call for action considered the possibilities of a cultural strike: challenge society to see what happens if no artists would produce anything in order to drive attention to the work of the artists, which is often not properly paid. The discussion continued around the implications of such actions and their benefits and actual impacts. A certain skepticism grew among the audience, questioning whether such actions would ever achieve their purposes.

The second group focused on bringing ethics to the market, as a result of their observation that the dehumanization of money growing.

Participants discussed strategies such as fighting tax havens and abolishing tax shelters in order to bring more ethics into the market. They also discussed the need for more autonomy and less control over others. Some group members also emphasized the need to adopt a “situational” attitude, paying more attention to suffering, while acting or being specific and to disincentivize speculation.

The action plan proposed: Stimulate ethical behavior (through conversation) with as little exclusion as possible.

The third group raised questions around the concept of equality and what this actually means in terms of money. Some of the key points raised included the access to basic needs such as water, food, shelter and health. Understanding money as a medium to project one’s will, emancipation, freedom and search of opportunity, while simultaneously pursuing an “equality” of both opportunity and outcome. Even though these last two were seen as two different things, there was an urgent need to balance them.

The action plan: Promote a political party that focuses on equal distribution of access to money as well as opportunity.

To end the workshop, everyone contributed to a list of sentences that would summarize their current feelings towards “money”:

“Money is a really interesting form of communication.”

“Money is a good instrument for equality.”

“Great to look at the benefits.”

“UBI is an illusion of fairness.”

“We need to carve out a better opinion of money.”

“UBI can be a neoliberal trap.”

“People need to change for money to change.”