Outside of Finance Workshop: “How Will The Tooth Fairy Pay You On Planet Cashless?”  by Ruth Catlow and Martin Zeilinger. 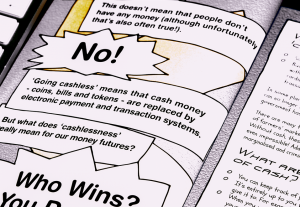 In addition to a series of interesting speakers and Q&A’s, MoneyLab #7 Outside of Finance gave visitors the opportunity to attend workshops and further explore issues related to global finance, payment systems and the social implications of our monetary policies and culture.

Martin Zeilinger and Ruth Catlow organized the workshop “How Will The Tooth Fairy Pay You On Planet Cashless?” about the tangible side of finance; cash. In particular, the absence of it and how this impacts society.

Martin Zeilinger is media researcher and senior lecturer in Computational Arts at Abertay University. Martin is interested in the intersection between contemporary art, technology and financial activism, and is no stranger to the MoneyLab scene. He was a lead organizer for MoneyLab#4 in London in 2018 and has teamed up with Ruth Catlow to co-creatively explore the notion of a cashless society.

Ruth Catlow is an artist, curator, as well as a respected researcher and speaker with an expertise in network cultures and emancipatory practices. She is artistic director of Furtherfield, an international community for arts, technology and social change.

Ruth and Martin started the workshop with explaining that issues regarding the use and need of a tangible money are diverse, complex — and complicated.

According to Martin and Ruth, many of the issues (will) impact young people in particular, who grow up within this monetary system. Martin and Ruth explore new ways and approaches in understanding how cashlessness can affect society, specifically in regard to children and young people.

It’s not only about how to tell the story, Ruth shared, but about successfully communicating the problems surrounding a cashless society.

What happens when you can’t visualize money? It’s a very abstract problem which makes it hard to communicate to younger people and children. How can we compress something that is complex into something that is relatable, interesting and fun?

To face this challenge, Martin has given community-level workshops to families with children, exploring the notion of value and exchange with children and families in a social, communal context.

Should a cashless society leave us quaking in our boots? Come play our game imagining the future of money – and how we’ll get by if there’s no cash to pay for things. You’ll get a given scenario and are asked to design a way to make exchanges in the future. Are you a ‘Barter Bender’ or ‘Sharey Carey’? Or will you sink the system and start again? Find out!”

To help us along with developing a scenario, we were given a handful of relevant problematic themes:

My group’s task was to help think of scenario’s that aid in rethinking cash. It was a short exercise, that lead our team to shape a semi sci-fi story of a cashless future. In our cashless future scenario, we envisioned a payment system that was tied to a personal identity from birth. And from this dystopian start, we explored what difficulties would arise and what a system like that could look like from a citizen’s perspective. 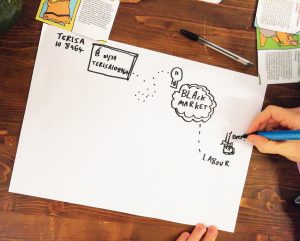 In this case, our fictional character was digs-robbed of his/her identity. Without, there can be no payments made whatsoever. To overcome this, he/her must use illegal services in order to get a new ID. However, without anything to pay for, we quickly sketched out way out of it and decided the character of the story would have to promise some form of labor to provide value.

Not a very solid scenario, and we noticed it was difficult to think ‘outside the box’ when it comes to financial systems.

The scenario-exercise was quite difficult. Of the 5-6 groups present only 2 or 3 had a scenario that would allow further discourse. The actual design challenge that Ruth and Martin came forward with became much more actionable in the second part of the workshop; the discussion.

The scenario’s created during the first half of the workshop created a nice starting point for the discussions later on. Martin and Ruth were keen to hear what the attendees thought of their project. Several people came with interesting ideas on how to engage children more effectively on the topic, and some of the conversations took a different turn and focused on value in general, and how children are taught to deal with this.

Martin explains how the actual transaction is difficult for children to grasp. On one occasion, a child had ‘payed’ for an item at a fair, and wanted to give cash money as well.

From a young age in school however, we are taught simple mathematics with real world examples (such as ‘I have two apple and give one to John, how many do I have left over?’) as a way to help children understand value. And many young kids are avid video gamers, which is heavily based on rewards for time or skill.

Within the group, gamification seems to be a theme that comes up a lot. One person mentioned using a sandbox where a group of children are assigned to build something from the sand — but with additional rules as to when and how you can build, enforcing a form of trade upon the group.

In the end, we didn’t solve the problem on how to effectively communicate value, exchange and how physical money works. Some members of the group expressed how some age groups are just too young (~12 years for example) to understand money-scenarios.

Either way, I think it’s great that these issues are being brought into communities to involve people with the topic and educate them as well as learn from them about social-economic behavior. These design fiction workshops help the public, and researchers as well.

ML#7: Payments and the Platforms: Monetization of the Social

Session 3 Lana Swarts argues that if national currency represents liberal democracy, and Bitcoin represents some combination of techno-libertarianism and anarcho-capitalism, then Libra represents Silicon Valley feudalism. Andrea Fumagalli historicizes the liberalization of the issuance of money all the way up to today’s attempts to financialize sentiments, and Valeria Ferrari discusses what remains of the dream of peer-to-peer, decentralized platforms [...]

ML#7: Critical Research Methods on Cryptocurrencies and other Blockchains.

A Workshop by Balazs Bodo and Alexandra Giannopoulou. A visualization of ERC20 token transfers on the Ethereum blockchain by Peter Ruppel and Friedhelm Victor, May 2019. (tokengallery.net) The workshop‚ Critical Research Methods on Cryptocurrencies and other Blockchains‘, was aimed to identify the methodological needs for research on blockchain technologies, and outline the difficulties researchers face [...]

A design fiction on a humanoid blockchain system that controls friendships, based on the work balance in the household. The film is made to be a critical conversation opener about our digital future. How do we design this kind of system in a ‘good’ way in terms of politics? Is consensus a sustainable model of [...]