A Workshop by Balazs Bodo and Alexandra Giannopoulou. 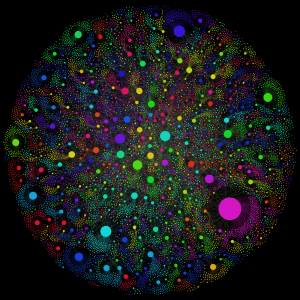 A visualization of ERC20 token transfers on the Ethereum blockchain by Peter Ruppel and Friedhelm Victor, May 2019.
(tokengallery.net)

The workshop‚ Critical Research Methods on Cryptocurrencies and other Blockchains‘, was aimed to identify the methodological needs for research on blockchain technologies, and outline the difficulties researchers face in this task.

It was led by Balazs Bodo and Alexandra Giannopoulou, who both do research on the societal impact of blockchain technologies at the Blockchain and Society Policy Research Lab at the University of Amsterdam.

Balazs Bodo is the PI of the Policy Research Lab and a research scientist at the Institute for Information Law, University of Amsterdam. Holding a MSc degree in Economics and a PhD in Media Studies, his research profile is strongly interdisciplinary. His most recent work has focused on copyright piracy, and algorithmic information personalization.

Alexandra Giannopoulou is a postdoctoral researcher at the Policy Lab. She holds a PhD from the Center for Legal and Economic Studies of Multimedia (CEJEM) at the University of Paris II Pantheon-Assas. Her research focuses on legal frameworks and policies surrounding the digital commons. Her main interests lie in open access and open data movements in the context of the scientific commons. Her research on copyright focuses on the public domain and on the current European copyright reform.

Technological imaginary of the Blockchain

Right from the beginning, the workshop participants were introduced to the fascinating world of data-driven research on the ‘technological imaginary of the blockchain’. To introduce their topic, Balazs and Alexandra made use of various case studies on the use and abuse of blockchain technologies – such as a visualization of the trade routes of a 2017 money laundering scandal that included larger sums from the 2014 hack of the bitcoin exchange service Mt Gox (s. Figure 1), or the graphical display of automated attack patterns on bitcoin trade networks (s. Figure 2). 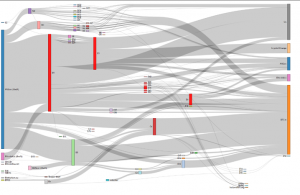 Figure 1: Theft coin flow of a bitcoin money laundering operations since the theft from Mt Gox in September 2011 Source: https://blog.wizsec.jp/2017/07/breaking-open-mtgox-1.html. 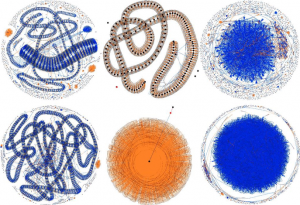 On the basis of these references, the speakers aimed to display how the debate on blockchain technologies is often driven by imaginaries and interpretations of what the technology could do for, but also to societies. They showed, that in order to properly evaluate actual dynamics and societal impact of blockchain technologies, data driven approaches are much needed. Especially for topics as sensitive as law and policy making, data-driven approaches are useful to ground complex imaginaries and media narratives in actual evidence (e.g. recorded transactions in a bitcoin-exchange network). The authors thereby designed their workshop in a way that provided a brief, but effective introduction into their work and expertise, and subsequently let a grand space for the discussion of this work, as well as the implications and methodological difficulties of research on blockchain technologies from a law and policy perspective.

Morality and the Quest for a ‘Good’ Society

With the end of the speaker’s priming introduction, the general discussion began to deviate into larger questions that touched the fields of morality and the quest for a ‘good’ society, topics that are naturally close to concerns regarding the legal framing of, and policy interventions on blockchain technologies.

As a general trend, many participants perceived that the value of bitcoin technology was too easily naturalized within general debates on the topic. They critiqued that it was not taken into account, that the outsourcing of trust, and monetary exchange into constant-in-flux bitcoin systems could also easily lead to the outsourcing of responsibilities and accountability into this very same infrastructure.

On the other hand, bitcoin was quickly identified as a potentially highly effective control technology for the future steering of societal ecosystems. What would happen to a society if blockchain technologies would not only automate accountability, transparency and trust, but could also be utilized to steer societal dynamics towards the imaginaries of dominant players such as corporate organizations and governments? Facebook’s recently failed Libra cryptocurrency was hereby referred to as a patient zero, illustrating the potential future implications of merging a scale-intensive social networking technology such as Facebook, with the techniques for individualized value evaluation and value exchange. As a participant said:

‘Libra is like a 0.1 version of what we know that it is coming, because of the nature of the monetization of the social media space. And also when you look at China, WeChat and Alipay and the deep integration of these systems into the everyday life, imagine that on a different level and then you can start to see the dimensions of it.’

For a few minutes then, looking into its potential futures, the dominant bitcoin imaginary that promises future improvements of social conditions, due to its feature of transparency in exchange rates, and its presumed superior accountability of decentralized bookkeeping protocols, got deeply questioned. In these moments the blockchain metaphor was revealed as not simply a technological imaginary among others, but additionally as a highly potent technology on basis of which potentially any political imaginary could be made to thrive.

From a perspective of law, critical research on potential applications and abuses of blockchain technologies, as well as a critical look on the methods used to employ such research, then becomes an important task in the quest for ‘good’ governance. Additionally, which kind of data makes valid evidence in court becomes an essential question to ask. Frankly pursued, such questions could finally lead to an understanding of blockchain technology that can be grounded in the imaginaries that democratic societies wish for themselves in the future.

From my point of view, it also became clear that the topic of the legal implications of blockchain, as urgent as it is, is a topic that needs increasingly and intensified communications into broader audiences, so that its difficulties and implications could be discussed in more depth within public debates. A theme, Balazs’s and Alexandra’s workshop certainly had as its goal.

Due to the complexity, merely having touched surface of the grand question described above, the workshop ended with the participants’ freshly incited fascination for the technology of blockchain from a legal perspective, as well as the request of Balazs Bodo to stay in touch. You can reach him under bodo<at>uva.nl, or at the Blockchain Society Policy Research Lab website https://blockchain-society.science/.