Crypto-Knitting-Circles has been a year-long project by visual artist Ailie Rutherford and designer Bettina Nissen exploring potential applications of new and emerging technologies within feminist and community currency. Inspired by a shared interest in feminist economics and the potential for emerging tech to disrupt established power structures, this work centred around the feminist community exchange space Swap Market in Govanhill (Glasgow) from January to December 2019. If we are inevitably moving towards a cashless society where machines and technology have an ever increasing impact on our lives, we want to know how we can do this in a way that empowers people, enables us to share resources across networks, and meet our needs rather than allowing technology to further disempower people and exasperate inequality. 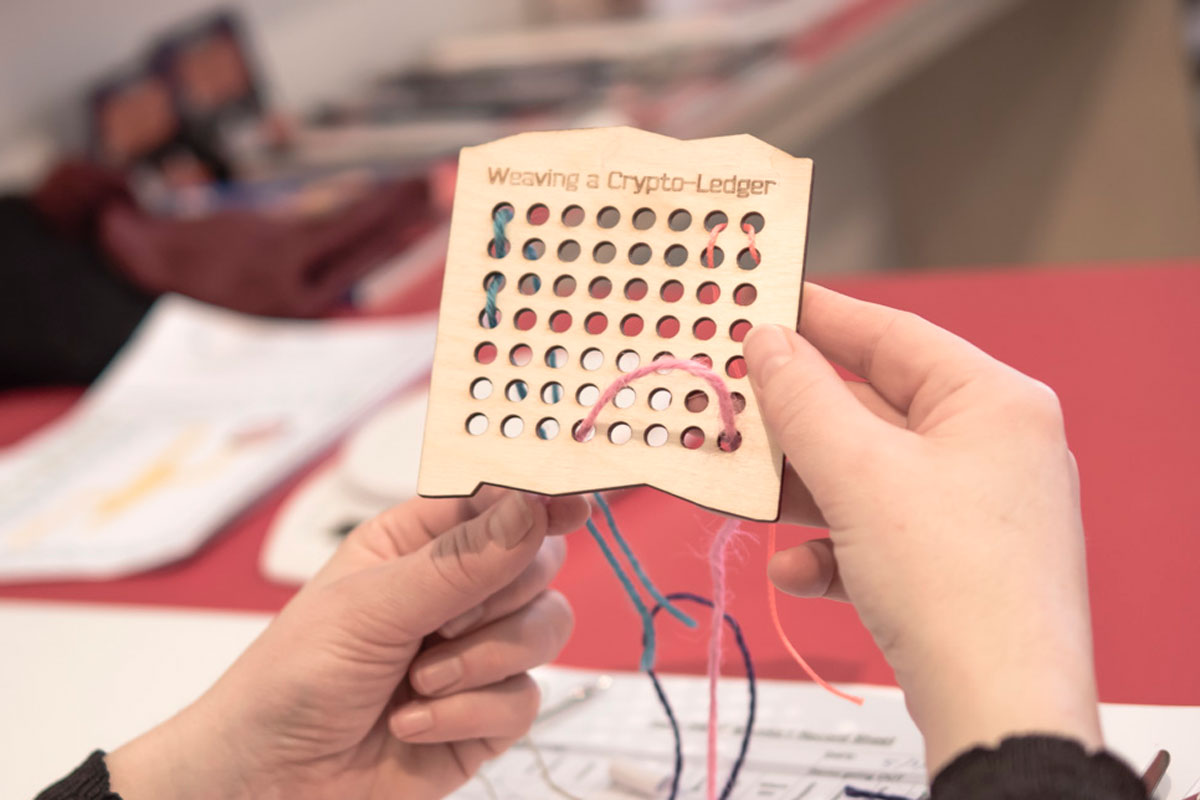 Our intention was for Crypto-Knitting-Circles to generate a set of proposals for possible feminist cryptocurrencies through an action research process of workshops, discussions and events. We broadly interpreted the term “cryptocurrency” to mean a decentralised network of exchanges incorporating an agreed set of values or ethics.

The initial aim of the project was to introduce concepts of blockchain and cryptocurrency to the members of the Swap Market and the wider Govanhill community, we developed a range of workshops that would make some of the principles of blockchain technology visible and hopefully understandable through the use of craft practices. In these initial workshops, we used practices such as knitting and weaving to convey and understand aspects of blockchain, the concept of a shared ledger and decentralised network, inviting critical thinking and discussion on this technology. This was combined with discussions on feminist economics to introduce the idea to new audiences and expand the conversation with those already familiar with the concept. Through games designed to help define a collective value system for feminist exchange we looked at what might be exchanged on a feminist currency network, where might these new technologies be useful? And what are our concerns?

Participants in early stage workshops were interested individuals, Swap Market members, PBoG followers. Discussions centered on what sorts of things might be exchanged and what shared concerns, values and ethics we have. In later workshops, participants were organisers from local projects and self-organised groups looking at how we could share and support each other across a network and what role technology might play. 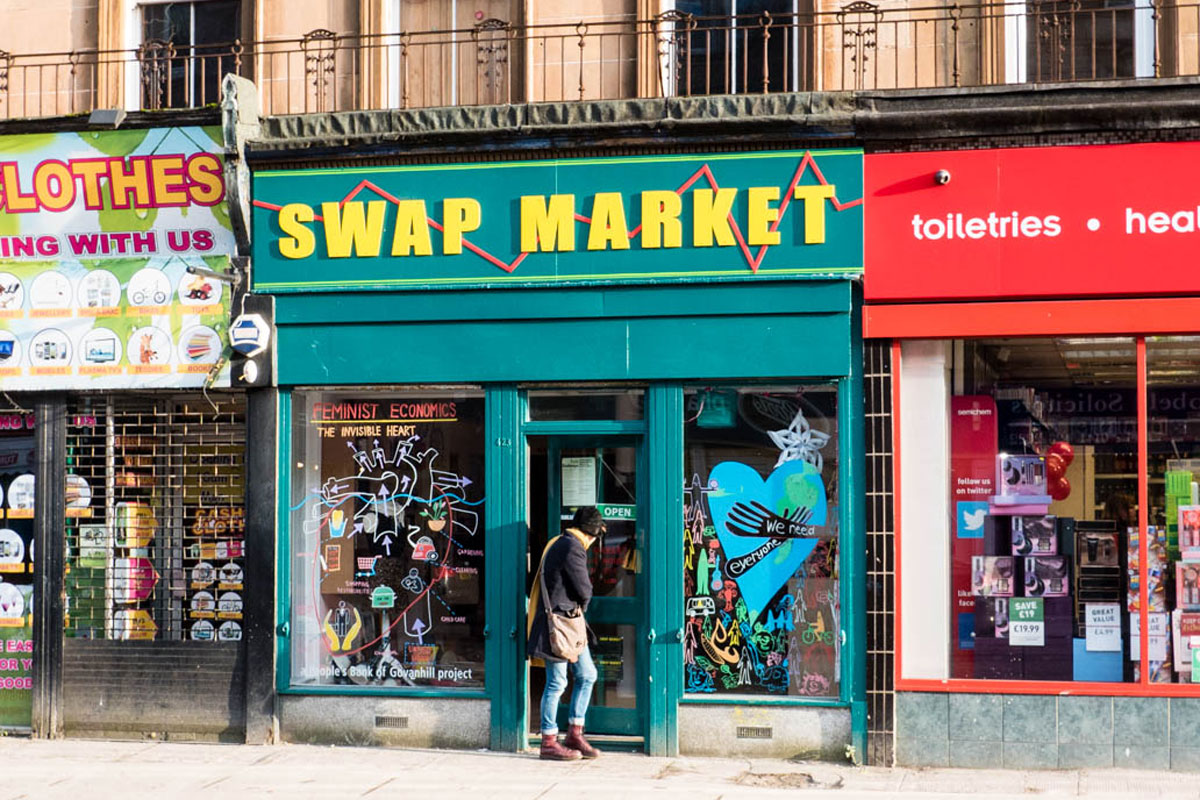 Workshop Conversations:
An Ethic of Care is fundamental to any feminist economy. We need to radically re-think our value system in a reversal of capitalist exploitative, extractive economy to one of respect and compassion. We need to decolonise knowledge and the idea of financial education. Who would we like to learn from? Who is doing interesting work on alternative economies? How can we learn from each other? We need an alternative to the capitalist approach to financial education of imposing the ideas of white men as if that were politically neutral.

Subsequent workshops continued to develop a set of guiding principles that would help us establish common ground, collectively define what we might want from a digital community currency and how this would relate to feminist economic theory. This is not about creating a community network solely for women, but devising an exchange network that prioritises care and all the forms of working, living and being that have been de-valued under capitalism. The workshop process is documented and discussed more fully in our short publication, downloadable here.

Further Ideas:
Through the project we moved from the principles of blockchain technology and the idea of a feminist cryptocurrency for Govanhill and the sharing of resources in a distributed system to arrive at the importance of a system that supports and values sharing, caring and experiential knowledge adopting feminist economic principles. The value of blockchain technologies and smart contracts for physical resource sharing is clear but the more challenging issue that became apparent throughout this project, is the intangible and emotional labour inherent in community work and what an exchange system for intangibles may look like. Further ideas have grown from the Crypto-Knitting-Circles research period, such as a Decentralised funding model, a Community Commoning platform and a new proposal String Figures – to design and build a decentralised system of trans-actions that values and rewards community activism and care work.

String Figures proposal
String Figures takes its title from techno-feminist Donna Haraway’s metaphor for the inextricable threads that connect us all. The need to collectively share experiential knowledge across local grassroots groups became a key theme recurring throughout the Crypto-Knitting-Circles workshops, alongside a need for redistribution of power through an exchange system that values and rewards community activism and care work. The key aim of String Figures is to design and build a decentralised system of trans-actions working closely with six local groups as participants, taking an iterative approach by mocking-up and simulating the characteristics of a distributed exchange network. String Figures will bring in artists working with digital technologies, Libby Odai and Bob Moyler, to work with Ailie Rutherford and Bettina Nissen and local groups to collectively design a system for shared experiential learning across feminist and social justice groups to build a reciprocal network of care. The six groups are: Milk social enterprise, Category Is Books, The Well Multicultural Centre, Arc Independent, Outwith Co-writing space and The Peoples Bank of Govanhill; a diverse and politically motivated collective of groups and organisations working for social and economic justice in the Govanhill area.

String Figures will begin by mapping out and representing the sharing process across this local network, allowing participants to influence and change the system as we co-develop it addressing important questions raised through Crypto-knitting-Circles: Do we want to tokenise forms of exchange? Who defines the ethics of a collective? Should the ethics be fixed or evolving? Do we need a hack-proof system or to explicitly allow hacks to change the project as it moves forward? Following on from initial provocations, a digital prototype will be developed, to create a “feminist mockchain” – a system of exchange that mimics the characteristics of a blockchain and gives value to acts of care and sharing inherent in our work and central to feminist economics. Focusing on the participants’ multiple and entangled experiences, carefully considering group power dynamics as well as bias in the programming of technologies. While starting small, we are interested in the potential scaleability of the work to connect with other feminist projects and self-organised groups from further afield.