In the past decade blockchain was pulled from left to right and back again to solve what seems like any issue, achieve any dream. From libertarian anti-state crypto-currencies and new realms of monetization, to platforms for commoning and cooperative organizing. Much like the internet before it, we’re now seeing blockchain evolving into what might become a kind of general-purpose technology (albeit still experimental and speculative). This of course makes it all the more important to investigate what kind of social, political and economic worlds it can support.

Is blockchain useful if we want to break open the social imagination, or is it in the end only capable of confirming the status quo? Can blockchain technology help us imagine and work towards a more equitable, open, and flexible world? How are we entangled with others, the natural world around us, and the ledgers that keep track? Who benefits from blockchain and other financial technologies, and what kind of alternative economies can we achieve with them? What does real resistance look like, and what is innovation from below? These are some of the questions addressed in the Blockchain: Radicalising the Social Imagination panel session during MoneyLab #8: Minting a Fair Society organized by Aksioma.

The political economy of the hacker-engineer

Blockchain technology is often quite straightforwardly discredited in critical / leftist circles as serving neoliberal ideals. But, Jaya Klara Brekke says, there is more to it than this. The technology actually has particular lineages that are worth understanding in a more nuanced way, not in the least because it can contribute to a counter strategy to surveillance-based platform economies.

To do this, Jaya focusses on tracing the motivations and sensibilities of the character of the hacker-engineer that is central to the blockchain development space. As a blend between a hacker (a tinkerer interested in systems and changing them) and an engineer (interested making things work for a specific purpose, creating solutions) this character sees economics as a designeable space where behavior could be guided by systems and infrastructures instead of politics. Jaya explains that there are three technological and philosophical allegeances are important to the hacker-engineer when building these systems:

The possibility of unownable assets on the blockchain

What might an alternative to these extractive business models look like? Who is working in this space, and what directions seem to be most fruitful for the blockchain?

Martin Zeilinger’s work involves intellectual property issues in relation to contemporary art. Researching blockchain systems that deal with this, he shows how the technology often works to support a hyperfinancialization of the art market, art practices, or art itself. For example, Maecenas is an art investment start-up that tokenizes art works in fragments. People can buy and sell pieces of an art work. Jonas Lund created the Jonas Lund Token (JLT), a community that controls the artist’s practice and life. Interested parties might buy shares / tokens, and collectively decide which commissions he accepts, which grants to apply for etc.

So, how might the blockchain be repurposed for opposite aims? How could blockchain refuse property models rather than perpetuating them? Martin lays out two interesting directions:

Max Haiven frames the question of the posibilities of blockchain as a counter to the status quo even broader. How might blockchains become innovations that are rebellions against the fundamental functioning of capitalism, its architecture and the way it measures our work and value? For him, the focus should not be on the innovation that is promising disruption of finance and tech, but a sort of everyday innovation by the people as they go through life trying to survive in a system that is stacked against them. His example involves a packet of Ramen Noodles. 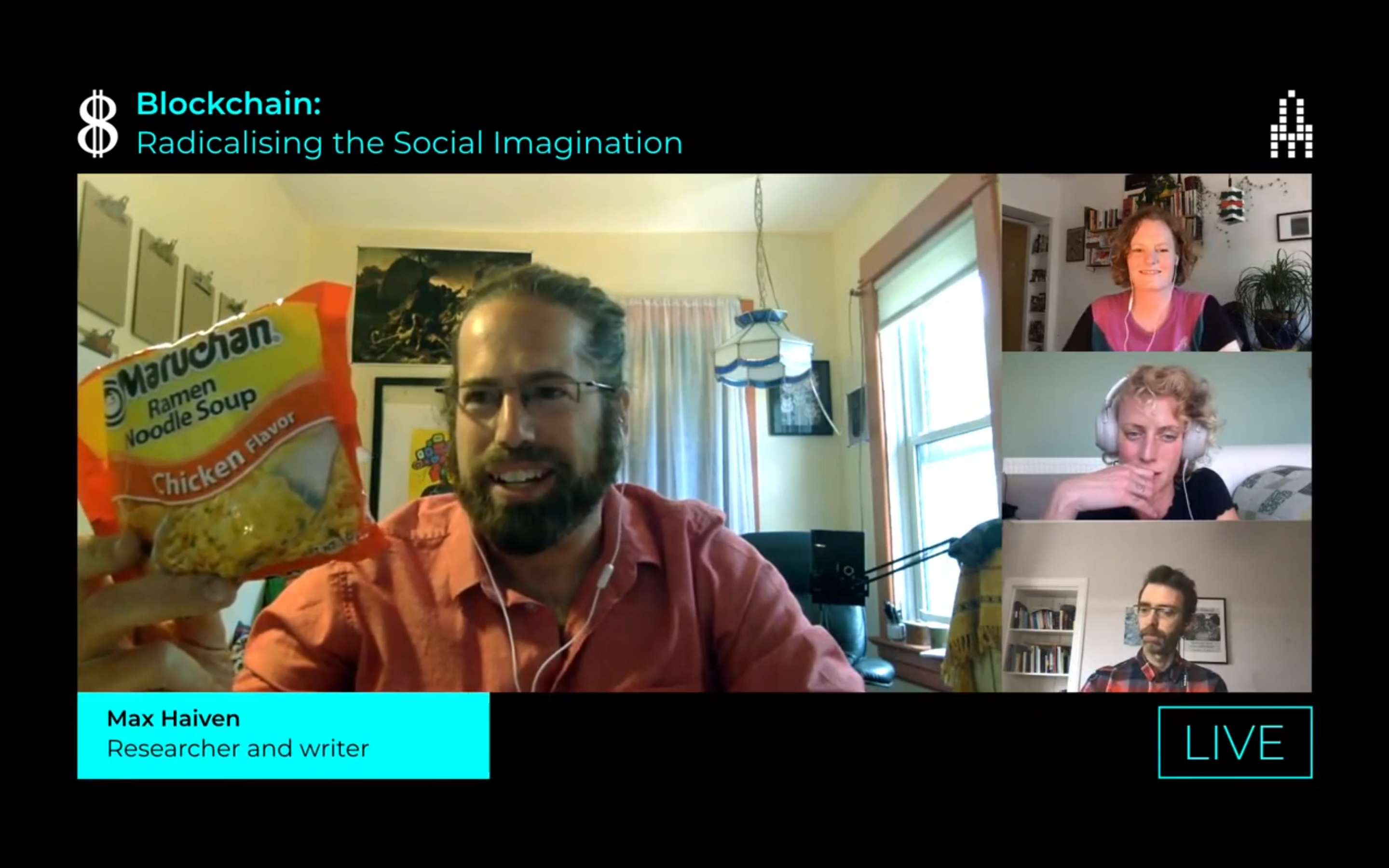 The well-known prison currency of cigarettes has been replaced in recent years by things like instant noodles. This is due to the fact that the increasingly privatized food services in prisons no longer provide the inmates with enough calories to keep healthy and strong enough to protect yourself in violent situations. In this context, instant noodles became very valuable as a uniform, long-lasting, and fungeable form of food. Prisoners can stack them up or exchange them as needed. This, Max says, is innovation from below: an innovation that is made in order to survive a system that does not value you. The example of mass incarceration (or “prison warfare” a term Max borrows from Dylan Rodriguez) shows how these systems of exclusion are often highly racialized.

What we can learn from this example is: