Imagine being a teenager nursing soldiers during the 1918 pandemic. It’s near impossible. Six months ago, such a task of the imagination would have been of no interest. Just as an online exhibition held in early 2019 by the National Archives (USA) titled ‘The Deadly Virus’, which surfaced a letter from a 19-year old nurse named Lutiant Van Wert, would have been far less interesting. Or relevant. 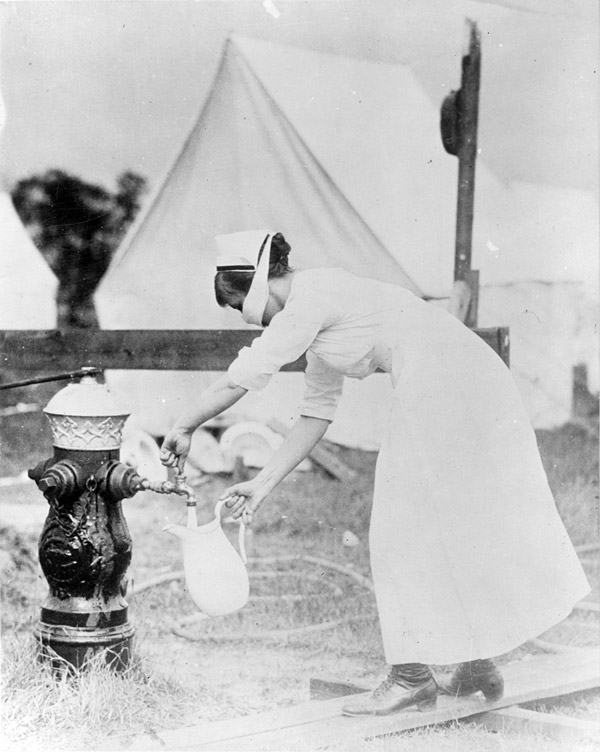 Anonymous nurse wearing a mask as protection against influenza. September 13, 1918

Reading Van Wert’s typewritten words (Record Group 75, Kansas City Archive) from October 17, 1918, conjures a series of emotions, in response to her emotions, that are almost indifferentiable from the experience of reading today’s vast variety of online accounts. Whether tweets, memes, doctors’ accounts or personal essays, the menagerie of surfable emotions span awkward irreverence, stark despair, disbelief, visceral empathy, unconjurable empathy, brief relief, momentary elevation to pure unshakable sadness – to name just a few. In her letter, Van Wert (a self-described Indian, volunteer nurse assigned to various military bases) writes to her friend Louise, who was still a student at the Haskell Indian Nations University in Kansas, about her experiences. What’s striking is her disinclination to take anything too seriously, up to and including a world-ravaging pandemic. It’s funny. And, resolute.

‘So everyone has the “flu” at Haskell?’  the letter opens. 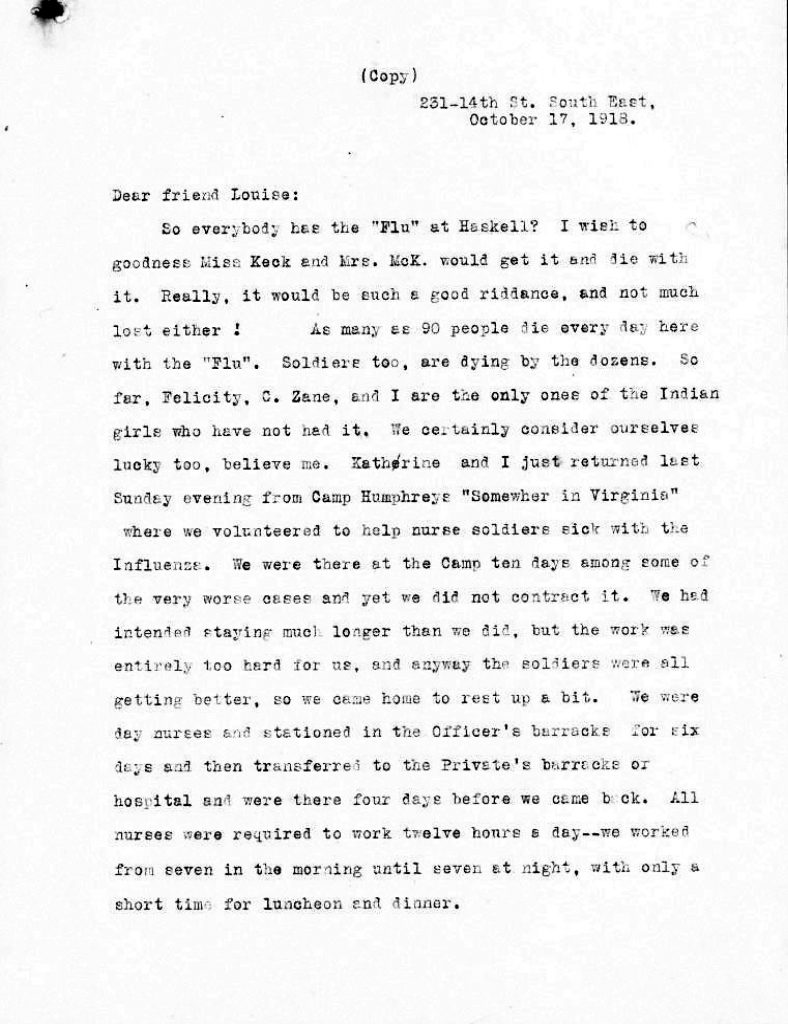 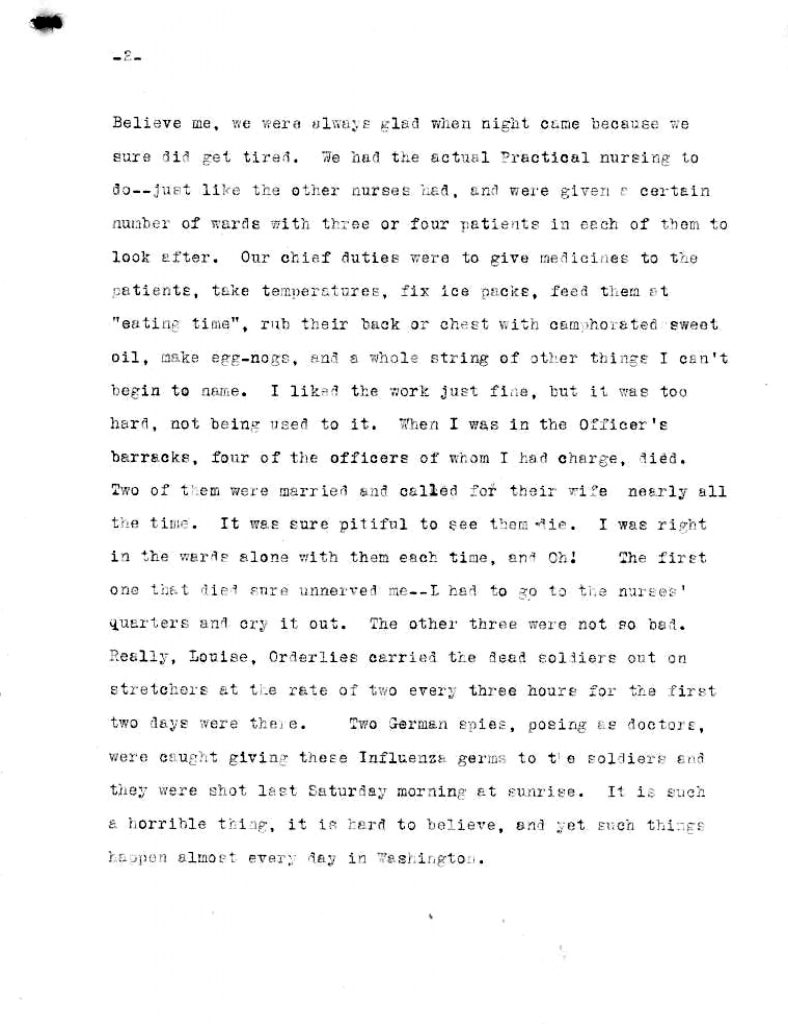 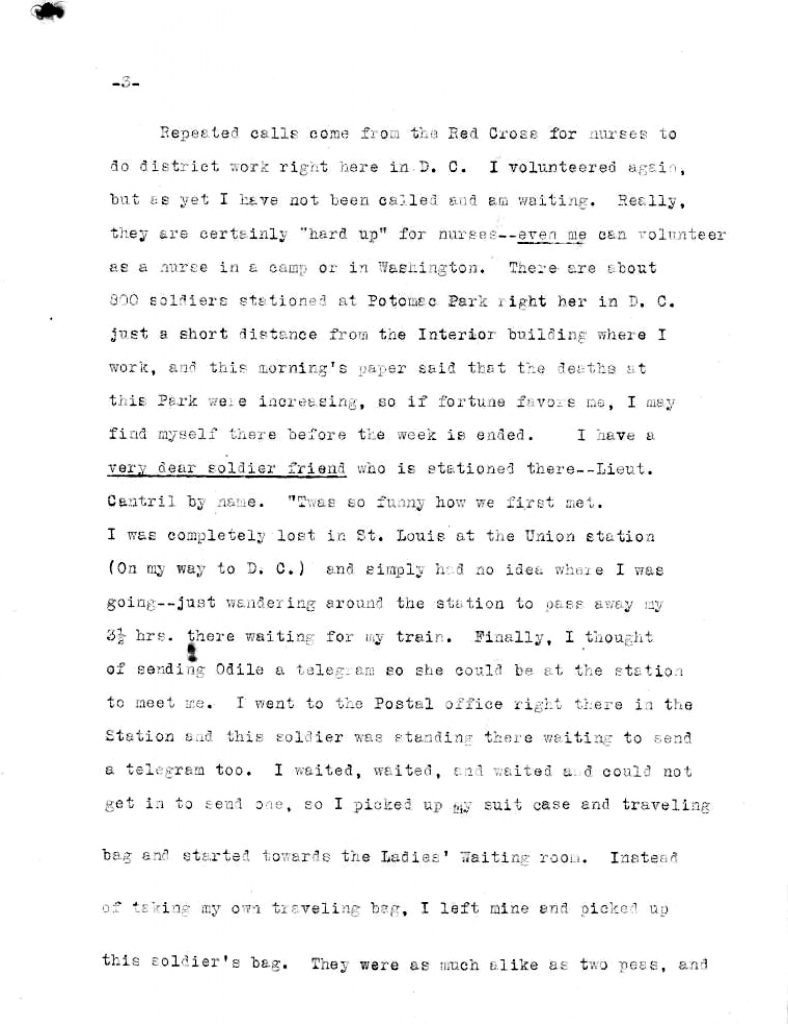 While the letter does describe death, this young woman’s account of being on the ‘deadly virus’s’ front line – plucky, confused, jovialness evaporating into read-denial as survival – is not so different than the accounts we are experiencing via the internet. Letters which illustrate the most human parts of our reactions, and how this humanness transcends time and place – because of this exact, simple commonality: the scary experience that is being human.

Reading her letter now, from the depths of our own worldwide virus, what becomes visible is a person grappling not just with the insufficiency of describing what she saw but also the futility of putting pen to paper in her feelings about it. Four of the officers Van Wert cared for over her ten days in the camp as a volunteer nurse, died. She describes bearing witness to this as ‘pitiful’ and tries to explain what it was like.

‘I was right in the wards alone with them each time, and Oh! The first one that died sure unnerved me—I had to go to the nurses’ quarters and cry it out. The other three were not so bad. Really, Louise, Orderlies carried the dead soldiers out on stretchers at the rate of two every three hours for the first two days were there.’

Now the once-forgotten Spanish influenza, our name for what Van Wert wryly describes as “flu” (quotation marks included), is a Twitter hashtag – and we are locked down in the thick (or, yet-thickness) of a pandemic in our own times. It brings this letter of a young nurse’s engagement with mortality into a different illumination. 102 years later, we are wearing masks, losing jobs, and getting cabin fever, while wrestling for some sense of balance between everyday concerns and the ongoing crisis. Making bread is punctuated by making jokes. Van Wert’s irreverence no longer scans as distasteful. It’s a survival mechanism. Her whiplash changes in attitude match the way our own emotions are fluctuating moment-to-moment today: We’re trying to manage our small daily routines while living in a larger, scarier story – unfathomable in its uncertainty, with too much distress and scope to garner all at once.

What We Now Call ‘The Spanish Flu’

Van Wert graduated in June 1918, shortly after the premier wave of the flu. She worked as a clerk in Rocky Ford, Colorado, before volunteering to nurse ailing soldiers. This was brave. Unlike the favoured elderly target of today’s corona virus, the flu had a high death rate among healthy adults 15 to 34 years of age. This flu got its name as World War I censors in Germany, the United Kingdom, France, and the United States, minimized early reports of illness and mortality to ‘maintain morale’ – while Spain was free to report the epidemic’s true effects, which created a false impression that Spain was far harder hit*.

Van Wert’s tonal observations go from dark to trivial in a few pages. What begins with description of experiences with death in the camp, ends with a request to have her sweater returned once quarantine is over.

‘As many as 90 people die every day here with the “Flu”. Soldiers too, are dying by the dozens. So far, Felicity, C. Zane, and I are the only ones of the Indian girls who have not had it. We certainly consider ourselves lucky too, believe me. We were there at the Camp ten days among some of the very worse cases and yet we did not contract it…

… It is perfectly alright about the sweater. I don’t expect you to be able to get it while you are in quarantine, but will still be glad to have it if you can send it as soon as you are out.’

Van Wert jackknifes through the pandemic in a way that is by turns funny, dissociative, and largely consistent with responses people seem to be having now. However, at the time such address of the subject was not tolerated. The Haskell Institute screened students’ mail, and Van Wert’s letter got her in trouble. The Institute read the jokes, and the superintendent regretted that “the time spend at Haskell did not develop a greater spirit of gratitude in her.” I wonder, who may be the superintendent today to our digital jests?

The letters spiritedness leaves the contemporary reader at a loss on the real circumstances Van Wert was living and working within. Four months before its penning, Van Wert had graduated from the Haskell Institute. A school physician’s account, of what the months before Lutiant volunteered to work with the worst cases looked like, was published by the Indian Leader:

“On March 17, without any thought of sickness being near, pupils began to come to the hospital. The second day 39 came. During the week so many were sick that school and industrial departments practically had to stop their work; there was a total in the hospital wards of 207 who were sick enough to require day and night attention… At the present time the epidemic appears to be spent,” the physician said, making the kind of miscalculation we have, in our own time, witnessed dozens of officials make. Van Wert witnessed all this, and volunteered to nurse sick people despite or because of it.

A tease she makes about taking advantage of the lockdown to visit her romantic-soldier, who is stationed at Potomac Park, isn’t far from one that might be made today: “There is a bill in the Senate today authorizing all the war-workers to be released from work for the duration of the epidemic. It has not passed the house yet, but I can’t help but hope it does. If it does, one can find plenty of things at home to busy herself with, or she might accidentally take a trip to Potomac Park. Ha! Ha!”

As full of humour and upbeat attitude is the letter may be, to the reader with hind-sight vision, it is also filled with coping mechanisms.

Originally, Van Wert spent 10 days in the camp before heading home. One could read this as quitting, however a deeper story is apparent. The reason she wants to go to Potomac Park was more than just seeing her soldier love. The are people there are in desperation, and Van Wert is not done trying to help. She has courage as well as an adapted understanding of her limitations. She is ready to try again.

‘Repeated calls come from the Red Cross for nurses to do district work right here in D.C. I volunteered again, but as yet I have not been called and am waiting. Really, they are certainly “hard up” for nurses—even me can volunteer as a nurse in a camp or in Washington. There are about 800 soldiers stationed at Potomac Park right [here] in D.C. just a short distance from the Interior building where I work, and this morning’s paper said that the deaths at this park was increasing, so if fortune favors me, I may find myself there before the week is ended.’

If fortune favors me. We read this in May 2020, knowing that in that October of 1918, the second, much deadlier outbreak was underway. Though Van Wert is 102 years behind us, we can see her station as sitting ahead. The outbreak at the Haskell Institute that Van Wert lived through was mainly in March. That corresponds with when the Covid-19 outbreak in our own time got abundantly underway. Van Wert must have read, that spring, what the surgeon who visited the Haskell Institute said was likely to happen: “I think that there will be a prompt decline in the number of cases hereafter, following the continuation of the warm weather and the result of the recent rain.” Just as those of us following the news might have seen Trump’s senior advisor Jared Kushner announce, on Wednesday 29th April, that “we’re on the other side of the medical aspect of this. The federal government rose to the challenge, and this is a great success story.”

We’ve just entered May, and she’s writing from October. She knows things we don’t yet: that in her time, the optimistic ones got it wrong. That things got worse again. Her words shimmer and shake with premonition-like quality and the ‘smile or you cry’ strength we are gathering too, each day when we pick up our pens. Van Wert had no idea that what she was writing would become an insightful relic to an unprecedented time. When we sit at our notepads scrawling our way through messy emotions, trying to understand the mess, we can know with that beauty of hindsight, our petty letters are more important than they may seem.

*A 2007 analysis of medical journals from the period of the pandemic found that the viral infection was no more aggressive than previous influenza strains. Instead, malnourishment, overcrowded medical camps and hospitals, and poor hygiene, all exacerbated by the recent war, promoted bacterial superinfection. This superinfection killed most of the victims, typically after a somewhat prolonged death bed.