For over a year now, life inside of the University has been weird – and it seems to only be getting weirder. Today the entire student and faculty cohort received a letter from the ‘President’ of the university that has inspired a new series over here at INC’s corner of No Fun that will here forth be called Disturbing Moment of the Day (DMOTD). Feel free to make that acronym a thing.

Some of you may remember the weird ‘Work & Relax‘ space that the University opened up last year. An update on that conspicuous gesture is coming soon. For now, I present to you the DMOTD, an Easter email from the ‘president’ to everyone at the university. 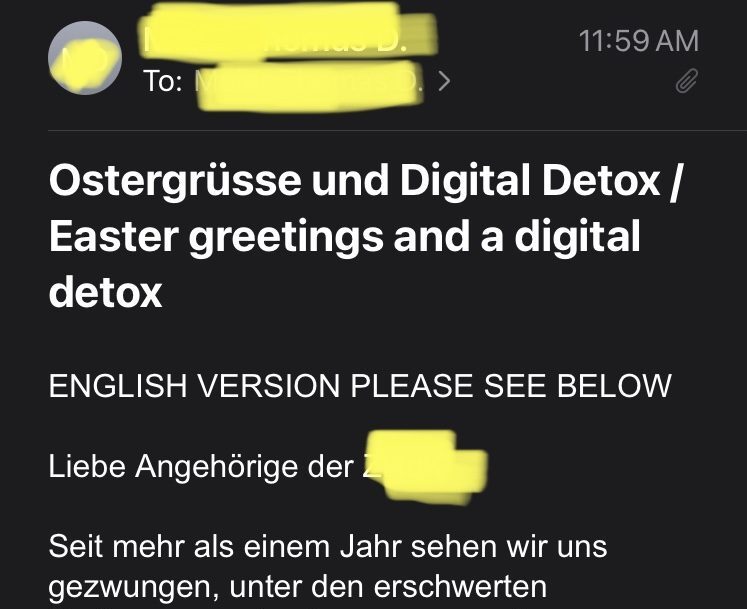 I’ll skip ahead to the English part… 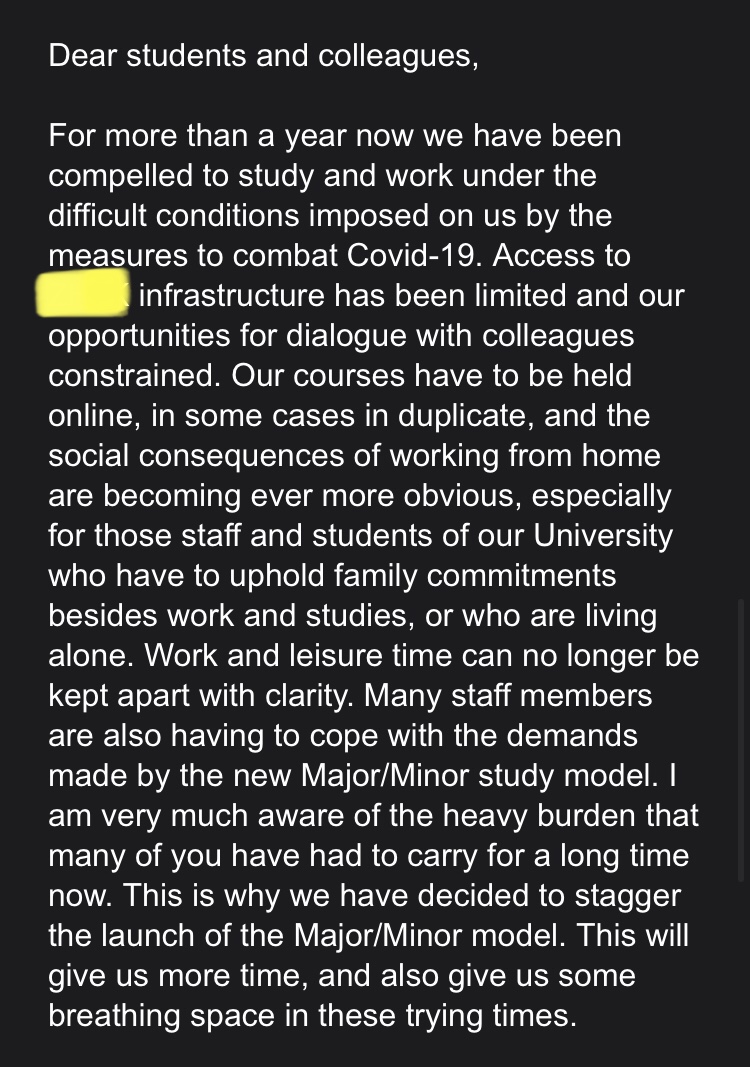 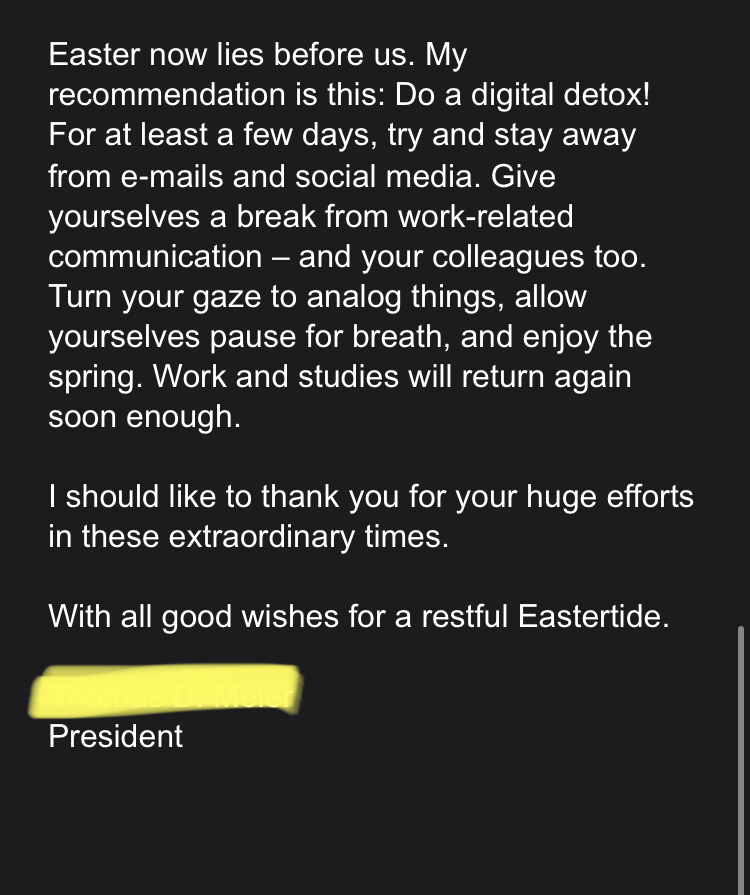 And yes, he did use that GIF.

Wow, thank you. The ‘president’ of the university has bequeathed us all with a digital detox for Easter. He has granted us permission to take a break from ‘work-related communication’ and insinuated we should not email eachother during this time either.

Oh, where to begin with the analysis and critique?

As we already know, the university operates not only as a business but a corporation. And today, every good corporation must have a ‘workplace wellness’ agenda (the Work & Relax room turns out to be just one piece of this transparent puzzle, perhaps just the beginning of an immenent slew of problematic gestures). It is a little disappointing, at least for entertainment’s sake, that this weird suggestion is one that is so outdated (‘digital detox’ made its appearance in the Oxford Dictionary way back in 2013—ironically only in the online dictionary) and has been so extensively critiqued (two of most popular being that ‘digital detoxes’ are but a brief—ineffective—moment away from the overwhelm of digital connection and its tasks, prescribed to prepare the detoxer to return back to business-as-usual, more productive than before… and the point that it is a position of privilege to either ‘opt out’ or delegate one’s digital tasks to others). Early proponent, Douglas Rushkoff, who supported the idea/solution of digital detoxes in 2014 through his books and a documentary titled Living in the Now, has since retracted belief in the practice. Initially referred to him by his own coined term of the ‘digital sabbath’ (he also came up with “digital natives”, “social currency” and “viral media”), in an interview with the Guardian from 2016, Rushkoff explained:

Interviewer: Do you still advocate taking a digital sabbath?

Rushkoff: I came up with this thing which I now don’t like: the digital sabbath. It feels a little forced and arbitrary, and it frames digital detox as a deprivation. I would much rather help people learn to value looking into other people’s eyes. To sit in a room talking to people – I want people to value that, not because they aren’t being interrupted by digital media but because it’s valuable in its own right.

Wikipedia defines ‘digital detox’ as “a period of time when a person voluntarily refrains from using digital devices such as smartphones, computers, and social media platforms.” The original 2013 Oxford definition was,

digital detox (n): a period of time during which a person refrains from using electronic devices such as smartphones or computers, regarded as an opportunity to reduce stress or focus on social interaction in the physical world:
break free of your devices and go on a digital detox

The idea of ‘detoxification’ from digital devices (and particularly the use of social media) derives from alternative medicine, which uses the term for suggesting, and claiming, that the avoidance of certain foods will purge the body of unspecified toxins.

Advocation of abstinence typically connects with the implication of addiction. ‘Digital detox’ is framed in this way and frequently discussed with reference to ‘withdrawal,’ for example. The interrelation between technology and media and addiction is not new. In the 70’s Marie Winn, a big anti-television campaigner in the US, also likened TV to drugs. How often have we heard “social media is the new smoking”…

Discourses surrounding digital media over the past decade have homed in on the connection/disconnection binary, and dilemma, intensified by the invention of the smartphone and escalation of engagement with digital media that it has brought. Basically, the idea of detox has come to mean the abstenence from invasive media (including email and chat communications, alongside social media, streaming services and Youtube, and general internet usage). It was probably around 2011 and the release of Thomas H. Davenport and John C. Beck’s influential The Attention Economy that the development of the internet shifted towards seeing success as ‘stickiness’ (their word for a website’s ability to attract and retain users)—an objective that did not hold interest in the early internet.

By now ‘digital detoxing’ and the romance of disconnection has been quelled from all sorts of angles, for all sorts of (good) reasons. With its giddy praise for ‘restorative boredom,’ Kevin Roose’s celebrated ‘Do Not Disturb: How I Ditched My Phone and Unbroke My Brain‘ for the New York Times in 2019, reads as profoundly aged.

Today much critique of the digital detox exists. It’s probably a fair assumption that none of us here believe this is any form of solution/therapy for the mass sense of overwhelm much attributed to, and caused by, digital devices and their role in work and labour today (this includes basic relationship maintenance communication and the smart phone’s general unavoidable omnipresence, to name but two players in the overwhelm-factor). One of my favourite opinions on the matter comes from Zach Mandeville’s coolguy.website (also from 2018):

What I find most frustrating about these digital detox articles is their condescending tone. Every piece has the tone of an abusive partner trying to manipulate while sounding perfectly reasonable… They give you options, with small digs for how difficult they’ll be…

Digital Detox guides are focused on how gross you are now, and what you need to do to temporarily fix this. They never talk about how a few corporations now represent the entire internet, and these companies have turned the internet into a toxin. The underlying message with digital detox is that these companies are inevitable, as is the pain of being online, and it is up to you to learn how to deal.

In her book Digital Detox: The Politics of Disconnecting (Bingley, Emerald Publishing: 2020), Norwegian Professor of Media Studies Trine Syvertsen dissects how “media industries intensify the quest for attention, how companies and governments team up to get everybody online, and how the main responsibility for managing online risks and problems are placed on the users’ shoulders.” Whether through willpower and time restrictions or the use of productivity apps, Syvertsen gets into how “digital detoxing has much in common with other forms of self-help such as mindfulness, decluttering and simple living and places digital detox within a culture of self-optimisation.”

To understand digital detox practices, Syvertsen draws on three terms from media studies. These are:

This is as far as we are going to go today on the plethora of evidence, literature, and critique on how ‘digital detoxes’ are, well, bullshit. In a sentence, “Despite reported claims, there’s currently little scientific evidence that digital detoxes have any benefits.” (via The Conversation)

We can presume that the ‘president’ of the university is unaware of the complexities, history, and questionable relevance, of what he is suggesting. The disturbing-factor mostly came from this totally left-field suggestion, from the last person it might be expected from. In this case, the disturbing-factor was also a huge lol-factor (that gif?!) For now, this writer will be watching in hot anticipation if the university ceases its daily diluge of email notices, announcements, and general communications. Let’s see if they can take their own digital chill-pill this Easter. Will the professors cease emailing each other? Will the bombastic workload produced for them by the pandemic take a 4-day vacay, and see them pause correspondence with one another out of respect and obedience of the implied order to “give your collegues a break”?

Time will tell what this Weird Weekend: The University Edition may bring. 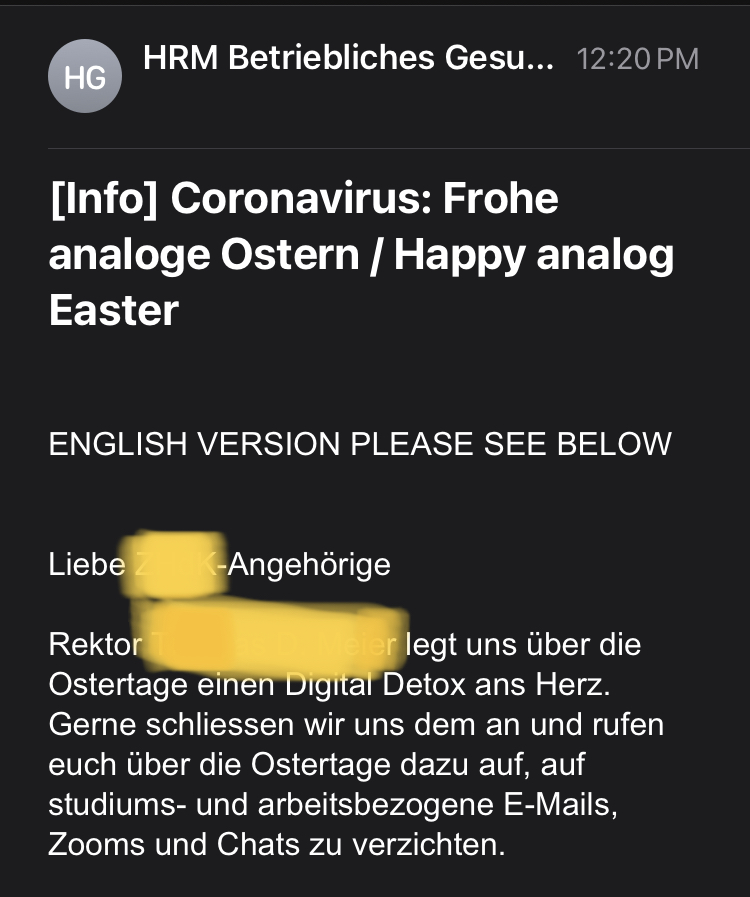 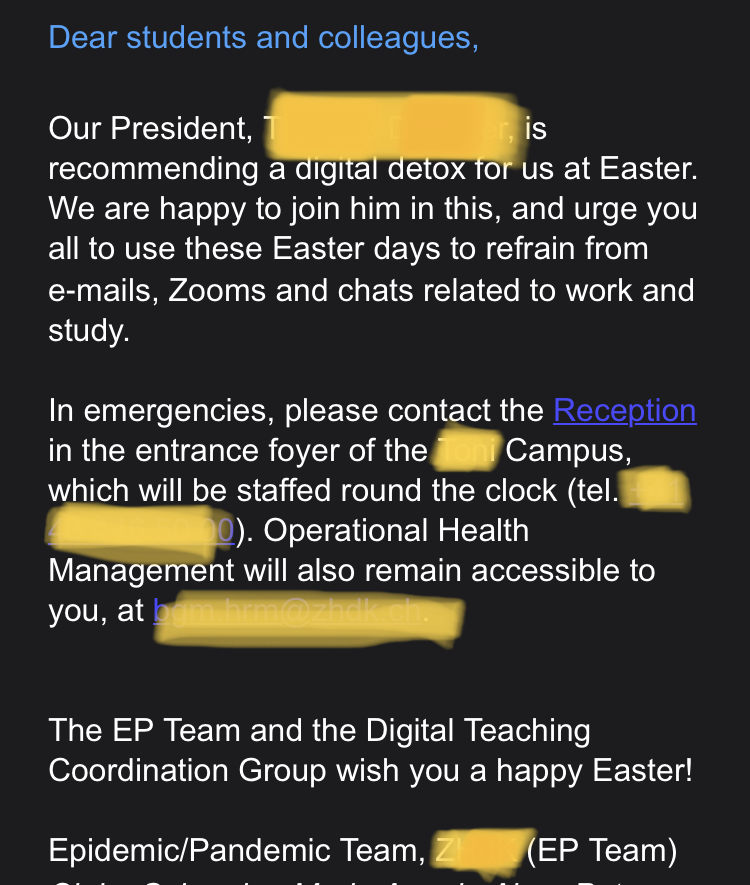