Thursday the 8th of March started with a showcase of alternative social media. Representatives of Crabgrass, Freedombox, Lorea, Secushare, Briar, Social Swarm, TheGlobalSquare, Thimbl and Unhosted were present. After a short introduction by the representatives, the audience was free to walk around and have a chat with the alternative media developers.

Next, Silvio Lorusso took the floor and introduces the artists of the Unlike Art session. Twelve Networked Media students of Piet Zwart Institute (Rotterdam) came to present their work. ‘A lot of projects are experiments and works in progress’ says Silvio, the moderator and curator of the session. ‘We hope to inspire others with the projects.’

The first project was ‘The Fruitsalad Enigma’ by Dave Young. Dave is looking at different ways to create a micro social network in a social network. For this project, he worked on an algorithm to use on Facebook with the goal to trigger a debate and do something that is playful and provocative. The Fruitsalad enigma converts words into fruits. For example, ‘Hi how are you’ is converted into: ‘pomegranate lemon grapefruit orange lemon kiwi watermelon grapefruit raspberry lemon grapefruit lemon pomegranate grape?’ For Dave, the strength of the encryption is not really important; the project is more about ‘what does this mean’ and ‘how can you trigger people to talk about it’. The converter can be used inside Facebook or as a browser plugin. When used as a build-in text window, the converter could for example be used for a status update on Facebook.

The second project presented was ‘Radical X’ by Eleanor Greenhalgh. She described her project as a new experimentation about privacy in social media.

‘Radical X is a platform for sex-positive, activist art making and writing. It hosts participatory projects that explore the role of sexuality as a radical political force. It’s a space for subversive, playful, critical creativity that makes links between the political and the up-close-and-personal.’

The aim of the project is to create sexual freedom and initiate ‘people for people’ by getting persons to think more about this, and to get them in control of their own data. ‘If your data is on another server, it you are still not in control’ says Eleanor. To get people to think about these topics, Eleanor created Radical X. She wants to invite people who are still using Facebook to post radical content to the project. She is also looking for people who can host it and for physical safeguarding of radical content. How far does solidarity go? What are they willing to host? She wants to get people to help others to exchange (radical) data that might be censored on Facebook.

Third, Jonas Lund took the floor. Silvio Lorusso called his project ‘very ambitious’ and I think he is right. Jonas wants to break the Guinness World Record of most comments on a post in China with the project ‘Behind the Great Firewall of Facebook’. However, China has a censorship on Facebook so you cannot use it inside the country borders. The inspiration of the project came form a lady who holds the record now. She broke the record by asking friends to post comments on her status. Together each of the 170 friends posted an average of 9.000 comments, an incredible high amount. Jonas didn’t ask his friends for help, but made an algorithm to post comments. He made a script that posted every two seconds something on a post on Facebook while he was in China. To break the record, 23 days were needed, but unfortunately the computer crashed after one day because of a lack of memory. He made a solution for this problem by creating a Google Chrome extension. This adds a button and if you click on it, it will start commenting. Hopefully he can break the Guinnes World Record soon.

Students Bartholomäus Traubeck and Jasper Van Loenen presented the Facebook Poking Machine. This is a small device that converts Facebook pokes into physical pokes by connecting the machine to an android phone. According to Bart and Jasper, the poking function of Facebook does not really make sense because it is virtual so you don’t feel the poke. With the machine, they want to bring the function of poking back from the virtual sphere to the body. There are three steps you have to take in order to use the machine:

Step 1. Friend the person you want to poke
Step 2. Poke him on Facebook
Step 3. The person will get a poke by the machine (a small box connected to you body with a small string)

During their presentation they say ‘it is not really spectacular’ but it made the audience laugh and the point was clear: to make people think about how to bring the virtual sphere of Facebook back to you body, and how to connect different devices.

Next, Andre Castro and Jasper van Loenen presented their project ‘You’re Boring’. ‘You’re boring is a FB-app in which real stories of people who find out FB monitoring or censoring contents are adapted so one’s friends can become the protagonists’ says Andre. When using this app the user will be able to find his/her friends being confronted with Facebook’s tactics to monitor and control its users activities. Andre and Jasper are looking for people who are abused, deleted or censored on Facebook in order to tell their story on the ‘You’re boring app’. For example, the breastfeeding group on Facebook was deleted, but ‘You’re Boring makes their story visible again and shows the characters of the stories. The project is still in an early stage. 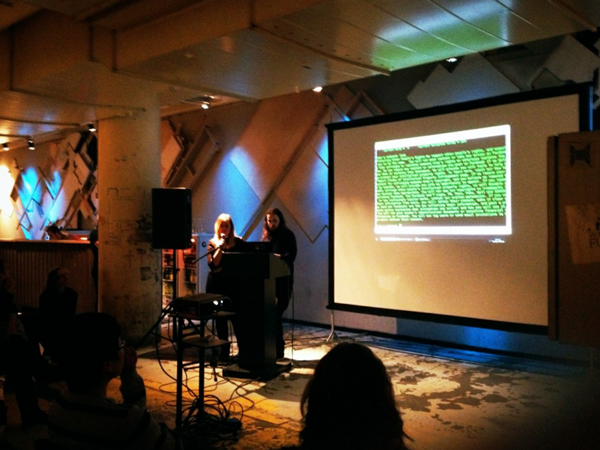 The terms of service of Facebook is pretty long and boring, so students Danny Van Der Kleij, Mirjam Dissel and Fabien Labeyrie made a text based game out of it: Lost in TOS. ‘Begin your journey in the terms of services’ says the game when you start playing. ‘We found a lot of similarities between labyrinth games and the terms of service of Facebook’ says Mirjam Dissel. ‘It makes you think about what is actually is said there. It is a big wall of text.’ With the game they want to give insight in the TOS and make people aware of the fact that the TOS is very hard to understand.The three students are still working on it, e.g. on getting gold so you can hire a lawyer in the game to understand the TOS better.

Dusan Barok developed ‘Faceleaks’. This project allows Facebook users to leak pictures of friends, with the consequence that even though their pictures are private, the whole world can see them. Private and deleted pictures on Facebook are public on Faceleaks. He developed a browser add-on that added a ‘leak button’ to Facebook pictures. People are free to install it and it is already used quite heavily. Deleted Facebook pictures are also deleted on Faceleaks, since Faceleaks deeplinks them straight from the Facebook servers.

Dusan is also working on another project: artwiki.org. The idea is to make all the submissions of artists public using semantic media wiki software. Yesterday they opened the site. On the site, artist can have a profile with information about their political standpoints. A person in the audience asks: ‘How did artists reacted to the fact that they have a profile with political information and that this is at the same level as the field of work or gender?’ Dusan answers that the aim is not really to make a platform for political work, but more to show that artists are political too. However, the political views are totally voluntarily.

For reasons of time one of the project showcased in the Unlike Art webpage was not presented to the audience. The John Smith Extension, by Eleanor Greenhalgh, Jonas Lund, Sebastian Schmieg, Marie Wocher, is a Chrome add-on that transform any users in Facebook and Google+ to “John Smith”, the most common name in these social media.

The session showed that Facebook can be more then a social media platform: it can be an inspiration for art. The works of the Piet Zwart students makes people think about Facebook on a different way. Their website can be found here.