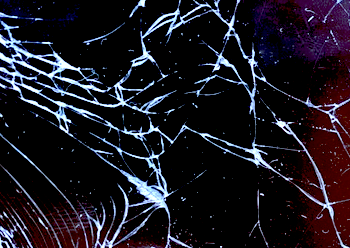 Whenever a mobile device breaks by collision or crash (talking about accidental slips and drops here / not considering luddite i-conoclasty, sponsored resistance tests or bittersweet pranks), it usually feels like reality’s flow just hiccupped at your expense.

The moment before you are using [or grabbing, or moving, or turning] your favourite gizmo, the next one « IT » is suddenly out of your reach – inadvertently free, spasmodically inclined to accomodate Newton’s law, hopefully for a quick ballistic detour [the ground, the sidewalk, the pavement], sometimes for a longer and more articulated expedition with no guaranteed return trip [the highway, the rollercoaster, the rave dancefloor].

It could also happen that the smartphone / tablet / you-name-it is temporarily leaned in an unstable position, so that it’s an external force [the wind, the cat, the newborn] that does the trick – with the owner experiencing a slightly delayed / displaced technocramp.

I personally witnessed a couple of horribly funny happenstances, too:

1) a friend was searching for his lost item after a concert, we literally rummaged everywhere (inside and outside the moderately big venue), then he decided to give up and – in case – retrace his previous steps while coming back home with the car; by the time he started the engine and drove for a few meters, we heard a terrible CRAAAAAAAK..

2) during a sunny picnic out in the park, another friend was having an IM confrontation with her remote partner, so after some painful – and not so convivial – back and forth (between the virtual fight and the relaxed surroundings) she decisively turned the phone face down in the grass; now, as any experienced camper knows, the apparently soft texture of a garden is indeed a potential minefield of SMALL POINTY ROCKS..

In short: anything could (would?) happen, at any time, in any given circumstance: our gadgets tightness (life?) is always at stake – not referring here to corporate strategies of killing-me-softly planned obsolences, recently moving // to make matters worse \\ from the actual material thing (“the new model is OUT, I hyPsterically / absolutely need it right now”) to its software & apps’ updating intricacies (“your old model is OUT, you desperately / quickly need a replacement asap”): the Mother Earth is gravitationally reclaming her conflicted raw materials & minerals, the world is filled with wicked edgy surfaces (and disloyally governed by Murphy’s – other than Newton’s – law anyway), even your smooth pockets or comfy bag are not totally safe from the intrusive ballet of some regular travelmate (one for all: your house keys).

As you probably heard, in extremely unfortunate events the whole contraption can also explode autonomously – not always in your face, but I guess it’s not a happy situation, generally speaking.

Any freshly-assembled device is like a tiny fragile baby, it comes into the world somehow naked – then it’s our responsability (as users and/or guardians) to properly dress it with a case or shell [!], an occasional ring holder and the not-necessarily-obvious (but in-the-end-reassuring) additional / tempered / gorilla / damage-resistent / kamikaze / dummy / bummer-proof protective glass.

Devices are often compared to extra organs or limbs, too – protean physical appendages that we carry on our bodies and operate with bare hands in order to access our own telematic multiverse; that’s why it’s in our utmost interest to care for such artifical prosthesis, feeling in danger whenever their integrity seems at risk or wounded in the unlikely event they get injured.

SCREEN accidents, in particular, convey a deeply stratified harm: gone the magic portal (haptic intermittences + beware: you can cut your fingers), broken the i-llusion (my vicarious digital self in fragments + bad luck in sight, as with mirrors?), images are randomly and ungracefully re-arranged, the original breach / fissure can easily aggravate (read: expand, branch out like creaking ice or bloom like a metastatic flower, uncannily fractalize).

Now you have to cope with some glassy scar(s), caressing and getting to know every little detais of this unexpected haphazarDesign: like you’re forced to partially re-adjust your walk after a sprain, or re-think your chewing after a tooth extraction, here you need to adapt to a new set of rules (combining tactility, visibility, functionality and practicality) to keep on using your handicapped tool.

As your fingertips search for alternative routes and detours among the growing constellation of crystallized debris, your eyes try to accomodate to the lysergic appearence of shattered images, distorted colours and pulsating charades of zombiefied pixels. With touch-insensitive areas and difficult-to-reach hot-spots within the graphical interface, the display becomes a tapestry of frustrated desire – or redirected libido, or sublimated compulsive usage.

And then, as with “therapeutic obstinacy”, it could arrive a moment when you’re faced with the hardest dilemma: invest in a cure that could potentially save the patient (but there is a pretty high cost, and a medium/low guarantee of success) or brutally replace it – with or without euthanasia (this is not exactly the case with humans, but you never know).

// Statistic assumptions:
I’m pretty sure each one of us accidentally dropped at least one device in a lifetime / we are now increasingly using multiple mobile devices, so there could be multiple one-and-only occasions for any of them / specularly, if you are aiming at the summarizing convergence of all of your activities in one single pocket-size digital-factotum, chances are it’s a badass piece of technology – so both very expensive and very delicate (read: one single impact could be fatal).

→ some crunchy numbers from www.gadget-cover.com

When it comes to location, smartphone users living in London seem to be the clumsiest, with 33% having smashed their screens in the same period of time. The percentage stood at just 19% among people living in the South East/East of England. To prepare for such a scenario, 57% of smartphone owners said that they have held onto their old phone to use as backup. Over a quarter (26%) claimed that they took out insurance for their phone – though that still means three quarters of smartphone owners are unprotected.

// Collateral philosophical ruminations:
You need to prepare for one or more smashing events (expecially if you’re young = you’re carrying the thing always with you). You need to be aware of the consequences. But above all, you need to remember the buttered cat paradox, ’cause a lot depends on which side the falling device will land on – although, with the latest trend of super-sophisticated modules of multiple mini-cameras mounted on the back of many cutting-edge smartphones, the scenario may change a bit..

→ some usability conundrums from redzombie.com

Designers create phones that meet their customers’ needs and desires, and today’s customers want big screens but sleek designs. As a result, cell phones have gradually gotten larger, while at the same time getting skinnier. This design requires the glass used for the screens to be both thin and durable, a hard combination to produce.

A variety of screen protectors are available for every phone on the market as well as phone cases that can show off phone owners’ style while safeguarding their devices. In spite of all this, there are many people who like to live dangerously by not putting any protection on their phone.

〉〉 Premise : it took me years to understand that the infamous “Flying Pop Tart Rainbow Cat” (aka Nyan Cat) is happily – and forever, and memetically – floating in mid air thanks to the fact it’s basically a cartoonized version of the equally notorious thought experiment just quoted. Maybe it’s because we’re not that familiar with pop tarts in Europe; maybe that purple tart is so big that it actually seems the actual horizontal torso of the animal, and not a piece of food on top of it. Or maybe it’s just me.. maybe I simply got distracted by the rainbow trail.

〉〉 Final twist (or twisted final) : here’s how this internet vernacular gem, once deeply internalized and ‘pataphysically re-interpreted, can result quite handy. I was thinking that, instead of simply accepting to “live dangerously” and/or feed my repressed consumer ego with a questionable shiny cover (that appears, sadly true, as the only semi-personalizable enhancement in this gallery of prescribed ornaments or fortune-shields), I could literally take risks and go for broke – in order to paradoxically avoid any breakage – by trying to splice my stark nude mobile device with the slipperiest case ever: a buttered loaf of bread.