The design field operates according to a fundamental conviction: that what we call design has an unambiguous existence. Back in the days, delimiting design was easy: whereas the mass-produced moka pot hissing on the stove was design, the handmade ceramic cups used to drink its coffee weren’t. Design began with the series and ended with it. Nowadays, things are more difficult: design escaped its industrial enclosure to become a mentality, which is to say that our mentality has become industrialized.1 The few handmade objects still surrounding us owe their aura to design. Design haunts them.

Whatever we make or encounter–a thing, an arrangement of things, a procedure to arrange such things–is haunted by design. Even if design is not there, it is already there. Thus, the ontological status of design is a ghostly one. But design is a peculiar ghost, one that craves the tangible world of the living. Design is like Slimer, the gluttonous ghost from Ghostbusters: a specter that enjoys ingurgitating as much food as it can.

Slimer’s interactions with the material world are not seamless: they leave slime wherever they go. We can allegorically interpret such gelatinous secretion as design’s ability to reconceptualize things within its mode of comprehension: suddenly, a pebble starts having a form and a function, it gets liable to a process of improvement, a process that is itself subject to a method. What happened? Design has digested the thing: the pebble is now an artifact, a designed object. Design’s metabolism has left its muculent mark and spurred out what it couldn’t process, namely, the thing’s symbolic and ritual aura, its culture; substituted by design culture, with its own equalizing symbols and rituals. The thing is apparently the same, but it is in fact completely different.

In 1963, Italian design polymath Bruno Munari amused himself by describing an orange, peas and a rose as industrial objects. Whereas the orange is “an almost perfect object”, the rose is deemed completely useless and complicated. Munari’s innocent divertissement, a sort of lesson in design thinking and perhaps a subtle critique of mass production, exemplifies the actual way in which design comes to reinterpret and thus change reality. Once such reinterpretation has happened it is very hard to think reality otherwise, beyond functionality and efficiency.2 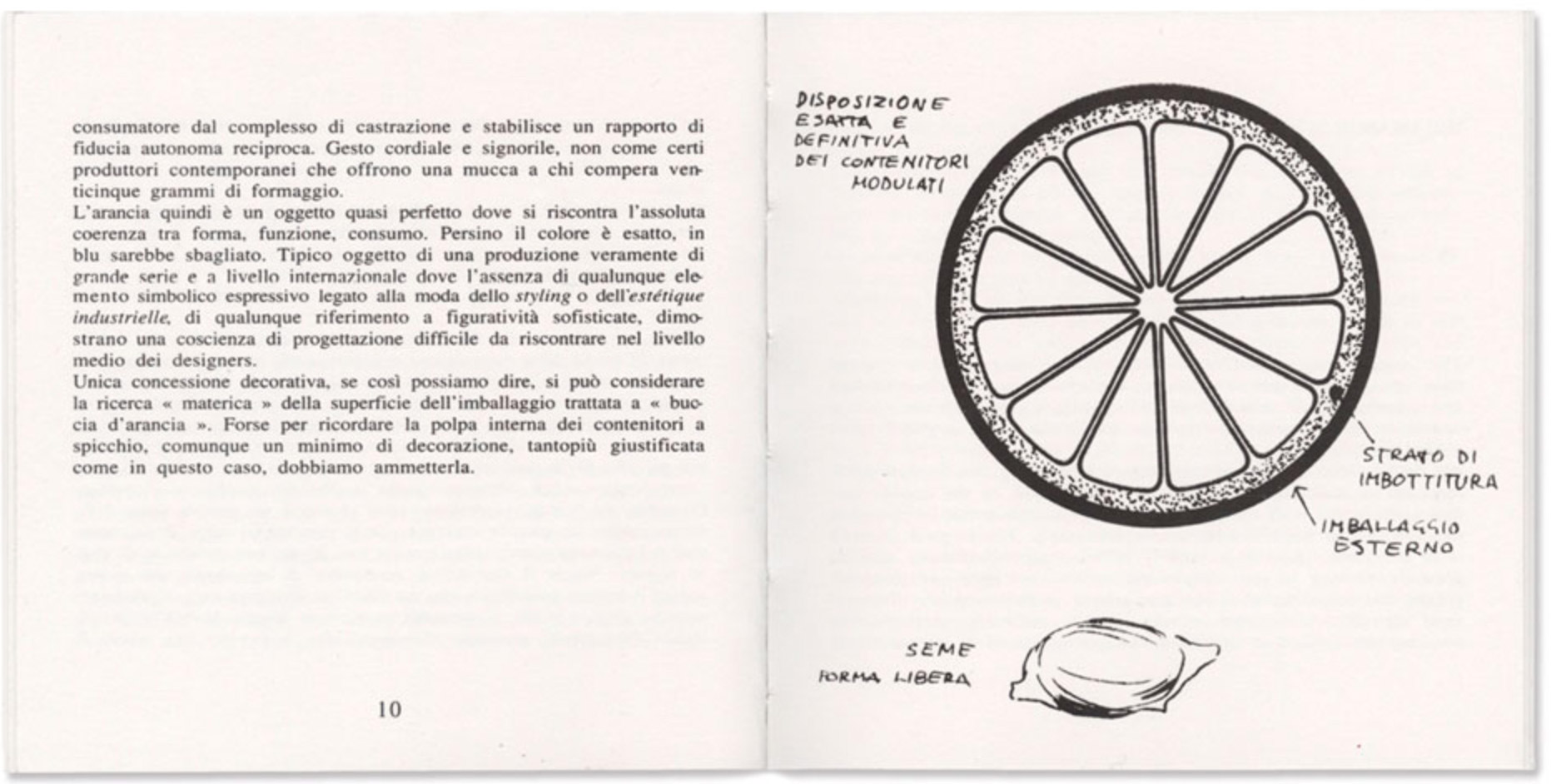 According to design curator Paola Antonelli, designers are “respectful, curious, generous, and hungry for other fields’ bodies of knowledge and expertise, designers invade without colonizing. Who can we trust more? They should run the world.”3 Ruha Benjamin might disagree. Asked, during a workshop, to offer a definition of design, the sociologist suggested that “design is a colonizing project”. By that she meant that design is used to describe everything.4 Description is indeed the form that design’s slimy digestion takes.

As Paul Rodgers and Craig Bremner denounce, “design is neither a product nor a service. Design occurs in relationship to everyone and everything – it describes and shapes relationships.”5 Design proceeds through formalization. Focusing on one of today’s most successful design currents, design thinking, Benjamin points out its capacity to encapsulate any form of activity, from the organization of a protests to the user journey of a banking app. The problem is that design thinking is forgetful, not unlike design in general: it neglects histories.6 Again Benjamin:

If one needs to “subvert” design, this implies that a dominant framework of design reigns–and I think one of the reasons why it reigns is that it has managed to fold any and everything under its agile wings.

According to the US scholar, there are risks associated with design thinking, an “umbrella philosophy” that diminishes broader forms of human activity, erasing the genealogies from which they emerged in the first place, canceling what Ezio Manzini calls tradition.7 It’s a matter of hegemony: “Whether design-speak sets out to colonize human activity, it is enacting a monopoly over creative thought and praxis.” Benjamin’s concerns are specifically related to racial issues. From this vantage point she is able to see the way in which design depletes empowerment: “Maybe what we must demand is not liberatory designs but just plain old liberation. Too retro, perhaps?”

A sense of disillusion partly derives from the realization that design can be, like money, a general equivalent: something that severs the links between things and thus estranges them. It can devour contexts. Practitioners suspect that the umbrella is too small, that design is lacking the conceptual and practical means of encompassing human activity, and that by attempting to do so it is actually making tabula rasa.8 Design might be the last successful avant-garde: a deliberate repudiation of histories. Designers who come to terms with such awareness logically develop an impostor syndrome, an urge to resist design assimilation. This is probably a concause of many personal exoduses, dreamed or practiced: ex-designers decide to engage with the fullness of a certain human activity within its specific and historically-rich domain: farming, writing, cooking… all activities that resist the reduction to “rural hacking”, “content design”, or “food design”. More rarely, however, the act of design description provides an enrichment: the selectivity of design allows for the inclusion of forgotten voices, for the lighthearted reshuffling of austere practices, for a novel bridging of contexts. In these rare cases, design “ignorance” truly becomes its bliss. At worst, design flattens a multiplicity of worlds into a one-dimensional, aseptic one, at best it nurtures them.9