“Money has never interested me,” repeated Dette Glashouwer during her performance titled MoneyMoneyMoney, opening the third session of the MoneyLab conference. A Dutch actress and performance artist, as well as one of the founders of Dutch theatre troupe Suver Nuver, Glashouwer has toured this and related solo performances around the world.

The piece engaged viewers in a crash course on the history of economics, investigating debt, stocks, pay bonuses, and more along the way. Glashouwer mused about her fascination with money throughout, dramatizing past events, such as how goldsmithing led to banking when a goldsmith started to write checks that he did not have enough gold to cash.

In a sort of pantomime timed perfectly to music, Glashouwer donned a costume resembling the central figure in Rembrandt’s The Night Watch, and noted that it referenced 1602, when the Dutch developed a revolutionary financial system as a result of various ailments of the period, for which spices became remedies. 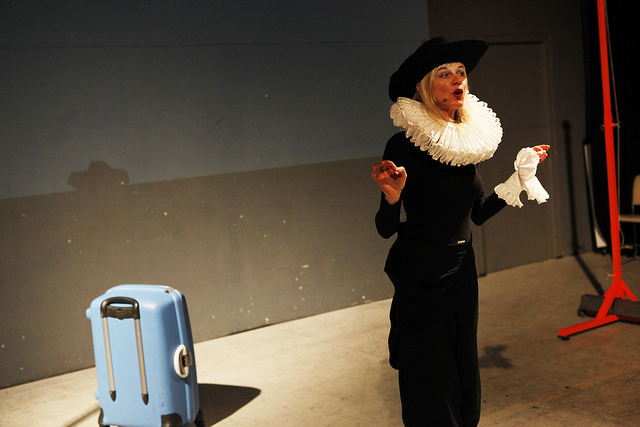 Revealing a mobile-like object consisting of a wire hanger and dangling spice packets, which she dubbed an “installation”, Glashouwer described the most expensive of these spices, white pepper. The imported spice had apparently been used to treat stomachaches, but its trade was abruptly discontinued during the Dutch-Portuguese War. This lack of availability inspired the Dutch to sail the oceans in search of the spice and to form the first multinational, the Dutch East India Company, pioneering an early form of shareholding, which ultimately led to the stock market.

Glashouwer then proceeded to talk about money in more contemporary terms, explaining that earnings of 58,000 euro per year represent the tipping point at which happiness begins to decline. She amusingly illustrated this figure by uncovering a collared white shirt of the type frequently worn by business professionals, embroidered with a graph depicting the happiness-to-income ratio. She hung the shirt on a line above her, where it stayed for the remainder of the performance, along with the aforementioned spice hanger and later-used props, forming a minimal but effective set.

In the concluding movement to her piece, Glashouwer addressed the emotional side of money by invoking the “spirit of desire,” the innate human drive that always wants more. She shared her personal fears of money, including concerns that there is not enough of it, that she is not worth it, and that she must negotiate for it. She divulged that her relationship to money bears resemblance to her romantic relationships, in that fear and hurt feelings lead her to attempt to reject money altogether.

This realization led Glashouwer to develop a variety of self-help strategies towards the improvement of money relationships, including an analogy to food, implying that people should enjoy money in the same manner, understanding when enough is enough. Her most concrete advice was for audience members to occasionally check-in and ask themselves: “What is it that I really desire?”

This MoneyLab performance represented a portion of Dette Glashouwer’s continuous research into the complexities of money. Pulling in the audience as stakeholders, she encouraged conference attendees to invest in the next chapter of her story, the stock of which can be purchased on her website.