Ron Peperkamp is an artist and the managing director of the Art Reserve Bank. His projects could be described as rather remarkable happenings, which, in a serious but playful way, invite the viewer to reflect on social and economic matters. Over the last two years, he has been running the Art Reserve Bank, hoping to provide an alternative to one of the fundamental problems of the bank crisis. 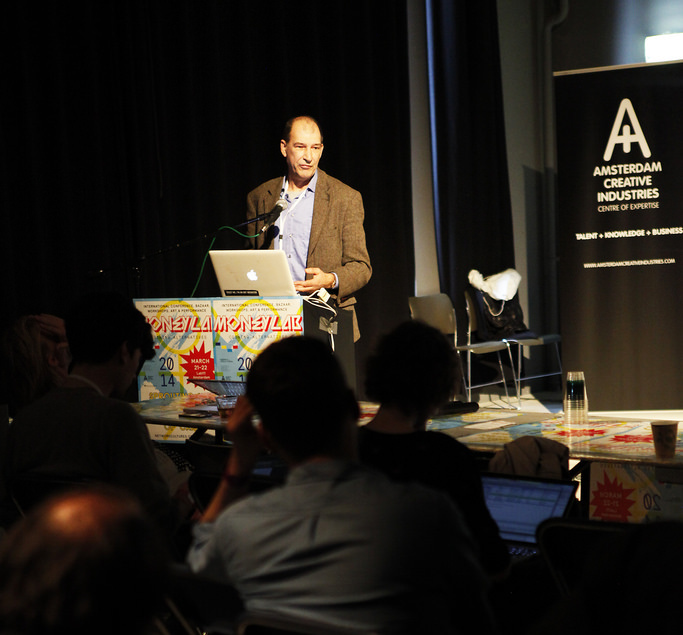 Peperkamp began his presentation by asking the audience to thank the financial crisis for the MoneyLab conference, mentioning that the crisis is one of credit and, therefore, of trust. Speaking about trust, he argued that this is the basis of the entire monetary system and the reason why the crisis is often called “systemic”. He explained that most economists like to describe the crisis as a sort of miscalculation of the value of some assets, in this case mortgages, a systemic accident, more or less, but in hindsight, quite an easy one to explain.

Peperkamp then offered his own understanding of the crisis, from an artist’s point of view, on a more abstract level: ‘I see it as a first sign of an unconscious, collective doubt about our debt based money. Banks did not trust each other anymore and did not trust the value of the assets that they owned. In this sense, it is a sort of mistrust of what this debt based money is actually worth’.

The Art Reserve Bank was created by artists and economists to test the viability of a new kind of money and started as a project to solve the problem of the monetary system not being backed by anything anymore, as it was in the past with the gold standard. The bank itself is a small structure in Eindhoven containing three basic components: a safe, a teller, and a mint through which coins get issued. Every month, an artist designs four coins and each is issued for one week only in exactly one hundred copies. The Art Reserve bank thus creates coins that have an artistic value and are issued in a limited amount.

The coins can be bought and afterwards exchanged for regular currency, by either selling it to a third party or by returning it to the bank and obtaining a 10% interest within the first year, the interest growing to 20% if the coin is returned in the second year and so on. For every hundred euro people pay for the coins, 10% is put in the safe, while 90% is used to create the actual coins.

Peperkamp declared that very few people actually returned coins so far, while a lot of them were sold on eBay, which is why a dealing room on the Art Reserve Bank website was created, so that coins can be traded by the public. The value of one coin is set each morning by cutting off the top and bottom bidding and obtaining the average value. The Art Reserve Bank is set to last for exactly five years, in which time around 25.000 coins will be issued. The experiment is hoping to prove that art can be a viable backing of currency, as well as having an art standard to replace the old gold standard. Peperkamp also argues that the quality of art is to hold its value or increase it and, because of this quality, it is possible to base an entire monetary system on it.