“Forcing academics to pay money to read the work of their colleagues? Scanning entire libraries but only allowing the folks at Google to read them? Providing scientific articles to those at elite universities in the First World, but not to children in the Global South? It’s outrageous and unacceptable.”

On January 11th 2013, computer programmer and open access activist Aaron Swartz committed suicide at the age of 26. He was charged, by federal prosecutors, with wire fraud and diverse violations of the Computer Fraud and Abuse Act after downloading millions of academic journal articles via a server in a cleaning cupboard in M.I.T. He was facing up to 35 years in prison, to be followed by three years of supervised release, restitution, forfeiture and a fine of up to 1 million US dollars.

Another relevant part of this story is that the academic knowledge resource J-store originally prosecuted Swartz for theft of their academic journals and intention to distribute, although he never actually distributed them. They dropped the case after it was going on too long, but the FBI continued to push the case through and prosecuted Swartz themselves.

Three years after his tragic death, the fight for free access to knowledge is far from over. Following Swartz’s path, Alexandra Elbakyan, a graduate student from Kazakhstan, has been making the headlines since 2011, when she founded Sci-Hub (at the age of 22). In the vein of what AAAAARG has been doing since 2000, “the website provide mass and public access to research papers”.

Described as “an explosive new development in how scientific research is read and distributed”, a kind of “Pirate Bay of the science world”, Sci-Hub disrupts the monopolies that profit from academic publishing. According to Science Magazine an increasing number of researchers are turning to Sci-Hub worldwide, as it hosts more than 50 million papers. Between September 2015 and March 2016, Science Magazine – with the help of Alexandra Elbakyan – analyzed Sci-Hub’s data and found that, over the 6 months time period, the site served up 28 million documents. More than 2,6 million download requests came from Iran, 3,4 million from India, and 4,4 million from China. The publisher with the most requested Sci-Hub articles? “It is Elsevier by a long shot.”

Server log data for the website Sci-Hub from September 2015 through February paint a revealing portrait of its users and their diverse interests. Source: Science Magazine

Elsevier, one of the largest academic journal publishers and based in Amsterdam, filed a lawsuit against Sci-Hub in 2015, claiming Sci-Hub caused and is causing irreparable damage to the organization and its publishing partners. Under the “Scientific, Technical and Medical“ section of the Relx Group annual report, it can be read that Elsevier’s objective is “to help its customers advance science and improve healthcare by providing world-class content, analytics and decision tools that enable them to make critical decisions, enhance productivity and improve outcomes.” A nice objective; but a profitable objective too. The publisher has seen a year-on-year growth in the millions, for example “revenues for 2015 were 2,070 million pounds sterling, compared to 2,048 million in 2014 and 2,126 million in 2013.”

This type of profit from academic research is not uncommon. According to The New York Times, journal publishers collectively earned 10 billion US dollars in 2015, “much of it from research libraries, which pay annual subscription fees ranging from 2,000 to 35,000 US dollars per title if they don’t buy subscriptions of bundled titles, which cost millions. The largest companies, like Elsevier, Taylor & Francis, Springer and Wiley, typically have profit margins of over 30 percent.”

The increase in knowledge privatization reduces global access to information and increases the hurdles faced by countries with less extensive educational systems. It restricts access to knowledge and technologies that were once public and the tools through which to share information with the public are now exasperating global inequalities such as incomes levels and standards of living. While the biggest and richest universities of the world can afford to spend thousands of dollars per year to subscribe to a broad range of important journals, smaller organizations have to pick and choose and, therefore, have access to less knowledge. When it comes to independent researchers, it is even worse. Individual articles generally cost around 30 US dollars; when it is commonly considered that 50 to 200 articles are needed to write a research paper, the imperitive and potential for Sci-Hub to distribute 28 million documents at no cost is game changing.

The Cost of Knowledge Movement

Tired of being forced to pay huge costs for information they submitted and reviewed themselves, 16,200 researchers have signed “The Cost of Knowledge boycott”, which means they will not submit to or referee Elsevier journals anymore.

Another way for academics to avoid exorbitant costs and to share their articles is Twitter. Many of them have started using the hashtag #icanhazpdf to freely share copyrighted papers. As it is explained in an article published by Quartz, “Scientists are tweeting a link to the paywalled article along with their email address in the hashtag — a riff on the infamous meme of a fluffy cat’s “I Can Has Cheezburger?” line. Someone else who does have access to the article downloads a pdf of the paper and emails the file to the person requesting it. The initial tweet is then deleted as soon as the requester receives the file.”

Other initiatives exist, such as Open Humanities Press (OHP), an international community of scholars, editors and readers with a focus on critical and cultural theory, which has been operating as a independent volunteer initiative since 2006, promoting open access scholarship in journals, books and exploring new forms of scholarly communication. Its aim is to raise awareness of open access publishing in the humanities and to provide promotional and technical support to open access journals that have been invited by OHP’s editorial oversight group to join the collective. 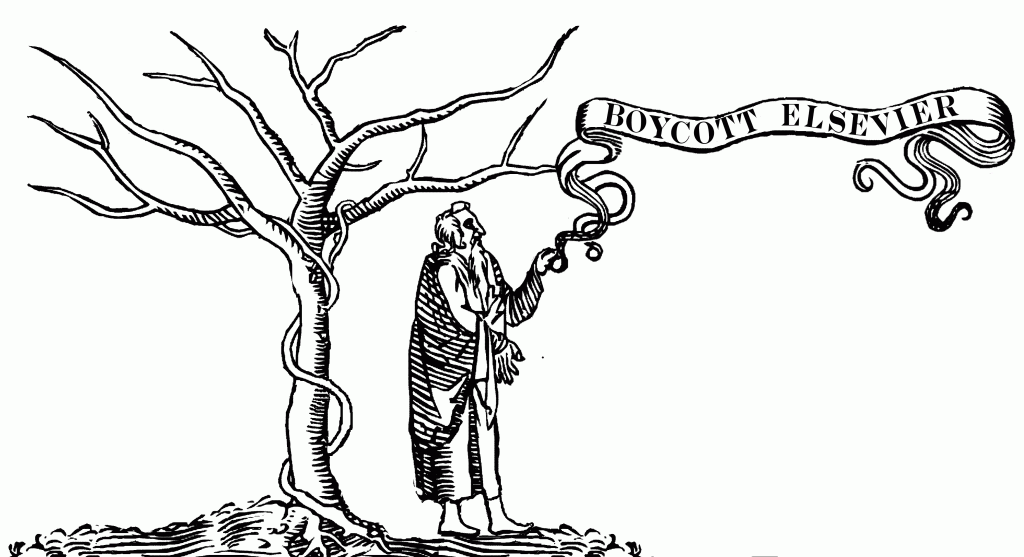 You pay for articles you found

Despite the fact that Sci-Hub faces a lawsuit and has had some their domains taken down, the site continues to operate under other domains. It has ignored an injunction to stop distributing copyrighted articles because it is hosted in Russia, a non-US or EU nation, and is beyond the influence of US courts. In response to the suit filed against her, Ms. Elbakyan wrote a letter to the judge and explained her motivation. She explained how difficult – if not impossible – it was for her, as a student in Kazakhstan, to access research papers; thus, her only choice was to pirate them. She pointed out that journal publishers acquire academic articles for free and they do not pay for the volunteer peer reviewers or editors either. They then go on to charge the same people to read those articles – most of the time funded through public taxes – as well as the general public.

Research is one of the most valuable and needed contributions to every society. It drives discovery and innovation. Knowledge is a common that should not be locked away from the public, especially when the state has funded that knowedlge to begin with. Would you believe that Einstein’s “Does the Inertia of a Body Depend Upon Its Energy Content?” remains behind a paywall, despite exceeding the traditional duration of copyright legislation and being over 100 years old? It is time to re-evaluate how academic knowledge is distributed before all research becomes privatized and published in order for a handful of companies to turn a profit.