The “Aesthetics of Financial Flows” was the overarching topic of the second session of MoneyLab #6 featuring talks by RYBN.ORG; Chris Anderson, Angeles Briones and Michele Mauri; Vienne Chan and Giulia dal Maso; and C-2, moderated by Patricia de Vries.

The presentations focused on various visualization practices of financial flows following questions and speculations around agency and aesthetics, economic and epistemological processes. From artistic to scientific and activist projects the panel set out to address both concrete and speculative questions: “What do we do after the mapping is over? Are there routes from the visual to the political? How can knowledge of financial systems and infrastructures lead to new regulation, local action and increased agency?”

As Patricia de Vries made clear, the session’s projects accounted for a charged urge for visualizing practices arising from the financial crisis as ways of relating as well as regaining control through “toying and tinkering with the inner working of financial flows.”

RYBN.ORG – an extra-disciplinary art collective founded in 1999, based in Paris – opened the panel with an very entertaining talk on “Speculative Algorithmic Trading.” Their artistic projects “try to capture the new spirit of Capitalism at the era of algorithmic governmentality.” Introducing their so-called Anti-Data-Mining (ADM) series initiated in 2006, they focused on their artistic works on algorithmic finance: Starting with ADM 8 (2011), a trading robot that will be active until bankruptcy, tweeting daily profit and loss updates @ADMXIII; continuing with ADM 9, an audiovisual installation making sense of the flash crash through data visualizations and “recording the imminent collapse”; ADM X, The Algorithmic Trading Freakshow (2013), an anti trading agent contest as well as their recent collaborative research platform ADM XI (2015).

“The Algorithmix Trading Freak Show”, video of the art work at the exhibition “GLOBALE: Infosphere”, 2015 at ZKM | Center for Art and Media, Karlsruhe, https://vimeo.com/149312528

ADM XI aims to “create innovative and counter-intuitive strategies of investment and speculation.” It does so by developing irrational trading algorithms that compete with each other on a marketplace hosted by rybn.org. Instead of being regulated by economic values, they are driven “by living organisms – soil, plants, bacteria; by supraterrestrial rules – […] environmental, astronomical, astrological; or by ancient or by forbidden ancient knowledges – esoteric, magic, geomancy, …” Invited artists to invent strategies through designing algorithms for the ADM XI platform have been: b01, Brendan Howell, Martin Howse, Nicolas Montgermont, Horia Cosmin Samoila, Antoine Schmitt, Marc Swynghedauw, Suzanne Treister. Visualizing financial flows in artistic, collaborative and inventive ways, RYBN offers highly interesting alternative perspectives on relations and data practices in economic infrastructures. (Quotes, see: http://www.rybn.org/ANTI/ADMXI/about/) 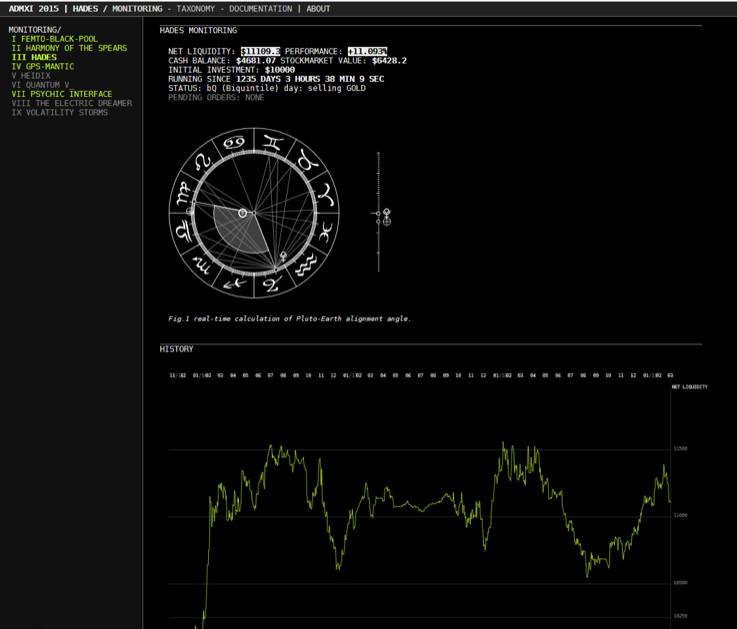 Tip: RYBN offers “Offshore Tour Operator”, a workshop and walk “in search of the physical traces of the offshore banking within the city landscape.” Upcoming is a tour through Berlin on April, 7th, more Info.

Moving from artistic interpretations to imagining and representing uncertainty of offshore financial flows, Chris Anderson, Angeles Briones, Michele Mauri in their talk “Fog of Finance? Visualising Offshore and the Aesthetics of Uncertainty” focused on visualization practices and their possibilities to critically realize aesthetics of uncertainty in economic trading.

Opening slide of the talk “Fog of Finance? Visualising Offshore and the Aesthetics of Uncertainty” by Chris Anderson, Angeles Briones, Michele Mauri.

Chris Anderson started off the talk, by tracing back the history of data journalism in an US-American context. Referring to his publication on “Apostles of Certainty: Data Journalism and the Politics of Doubt”, an ethnographic analysis on “original reporting”, Anderson made the point that American journalism became more quantitative as a reaction to cultural and political crises. Including visualization practices, notions of objectivity changed, making journalism an increasingly “exact science”. Connecting back to current debates on post-truth and fake news, the production of public knowledge, however, always relies on discourses situated between certainty and uncertainty.

Questions on how practices of visualizing uncertainty could look like, is what inspires the project “The Atlas of Offshore FDI” – a cooperative project by Tax Justice Network, the University of Sussex, DensityDesign Lab and the Public Data Lab.

Angeles Briones hinted at the lack of publicly available datasets of global offshore investment and presented the Atlas of Offshore FDI. It “aims to explore the scale and significance of […] offshore activity, as well as to shed new light onto its contents.” It does so by combining and modifying various visual practices inspired by physics, meteorology, statistics and art history to represent transnational economic flows as well as uncertainty accompanying these. As such, the atlas project intends to offer and reflect on critical data practices. It is situated within “broader debates around the knowability, unknowability and governability of transnational economic activity and the infrastructural configurations of relations between markets, states and citizens.” (Cf.: https://jonathangray.org/2019/02/08/moneylab6-fog-of-finance/#more-4924) For visualization practices of offshore trade, Angeles Briones diagnosed an “uncertainty of mapping language” and the arising “need of a new visual grammar”. As an reaction they developed their own tool called “Fog of Finance”, visualizing offshores to five countries (as of now).Its aim is to serve as a tool for non-experts, opening the black box of finance, as ways of counter-acting towards fighting information imbalances. 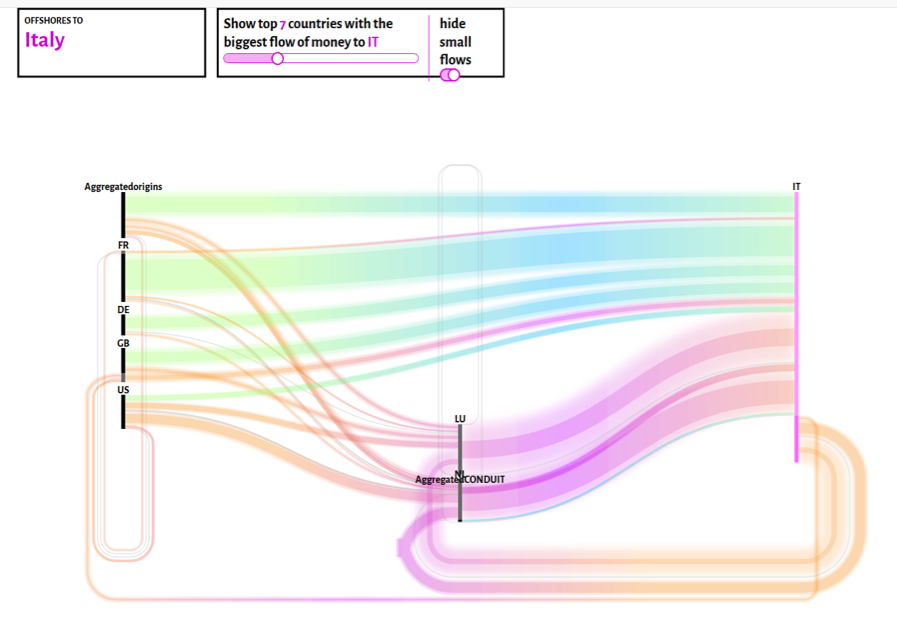 Screenshot of offshores to Italy, at Fog of Finance:

In their speculative intervention “Inspirations from the Periphery: A Speculative Counter-Approach to Carry-Trade Activity” Vienne Chan and Giulia dal Maso focuse on potentials of “envisioning a counter-method to the current banking system’s effect”. On the backdrop of the financial crisis, they took a look at the EU periphery – namely Italy and Croatia – “to grasp potential socio-economic possibilities”. Taking exploitive practices of foreign banks towards home-ownership models and questions of scale and carry trade as a starting point they asked “if households’ inclination to risk in order to secure the future can open up new ways of structuring money.” 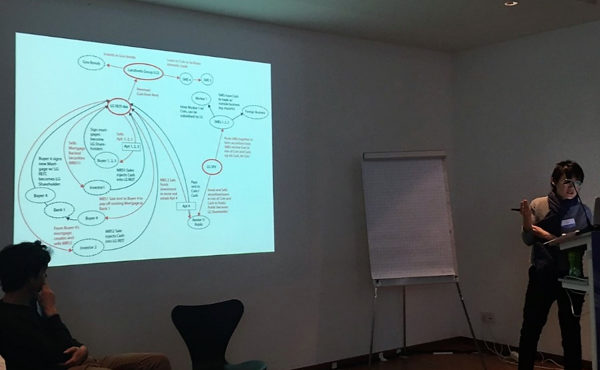 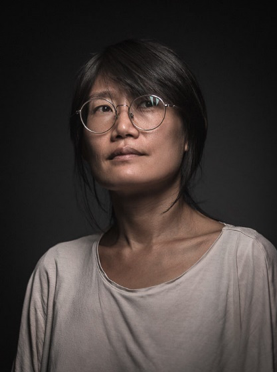 Vienne Chan explained in detail how carry trade in Croatian housing mortgages led to catastrophic effects of people losing their homes and speculated on how to device schemes and practices to visualize and counteract these processes. By introducing community coin they try to “secure local economy and to create monetary sovereignty”. Different to a lot of other coin projects they involve landlords as a reaction to the social working class position, with the aim of securing housing and to remove the supply of debt. 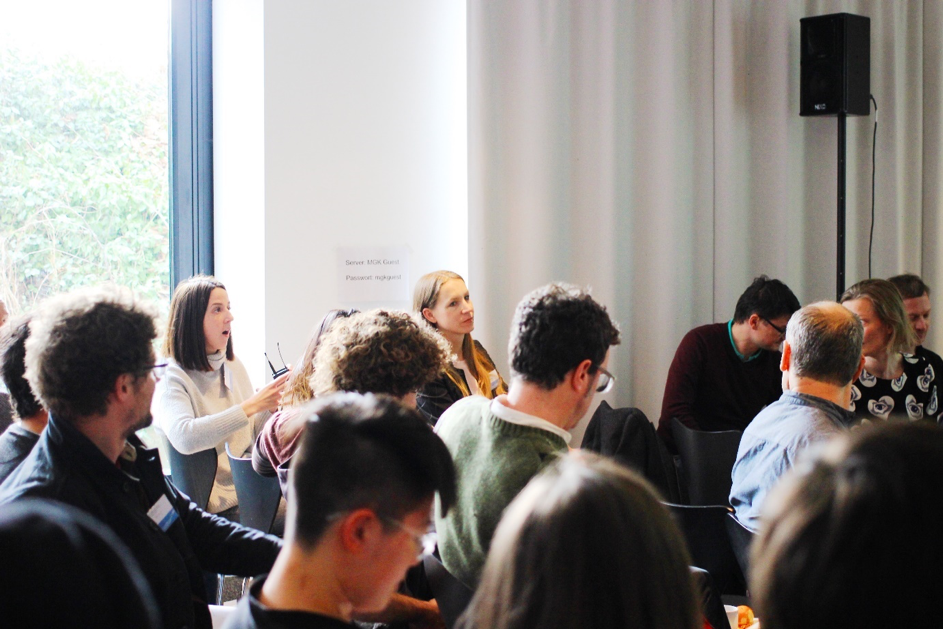 Discussion on “Aesthetics of Financial Flows”

In the lively discussion on the first three contributions of the panel, several main points came up, connecting the diverse artistic, scientific and activist takes on visualization financial flows: Mainly, they focused on questions of data practices, interrelations between public and political processes, as well as the overarching question on the possibilities of making economic flows visible.

Discussion revolved around the accountability of data and its practices, the relations between uncertainty and probability, vagueness and exactness, as well as around the challenges and chances of the critical and inventive combination and assembly of various data sets.

Further, a main take away was, that is remains important to question: What becomes visible in processes of making public that otherwise is not accessible? What can or cannot be seen? Which (data) practices related to financial flows come to light? What money flows can be visualized (and which remain unseen)? Which aesthetic and activist counter-measures can be taken to render visible the hidden? And in what ways are they always interconnected to the audience of the public intervention?

After the discussion, digital art collective C-2 held an partial art auction, inviting their audience to critically re-negotiate and reflect on the concept of ownership. Becoming self-made art collectors at MoneyLab #6 was easy: By acquiring C-2 tokens, participants could bid on an artwork and thereby purchase partial ownership rights.

Referring to other examples of tokenizing art, such as ascribe.io, the presenters traced back the possibilities and problems in collective and partial art ownership, relating it to questions on collecting of digitally based art works, already present in early net.art and digital art. What needs to be critically discussed are issues regarding distribution of power, distance, the number of owners, identity, trust and accessibility as well as the specifics of rules and agreements regulating tokenization of art. 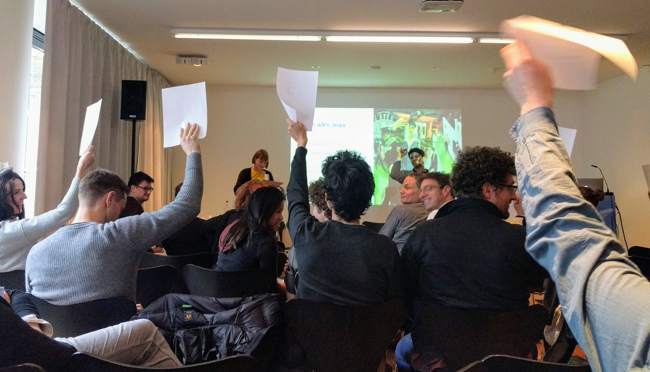 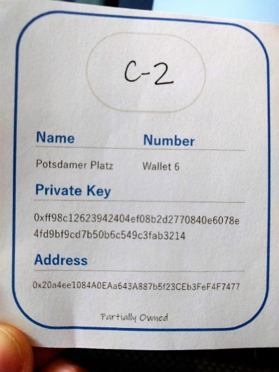 The process of tokenizing art sparked a great discussion on collective ownership and decision-making on the blockchain among the involved bidders. The key questions proposed by C-2 were: “Who of you decides when it’s time to vote and on what? Who of you takes the art piece home first? How could a token economy around C-2 look like? Are you even keen in experimenting with ownership?” As the lively discussion showed, distributed ownership of art both polarizes and stimulates various ideas on organizing decentralized proprietorship: Participants discussed the governance aspect, the problem of scaling and – in line with the art project – came to the partial conclusion that there can never be only one solution, due to the fact that the requirements are changing constantly. 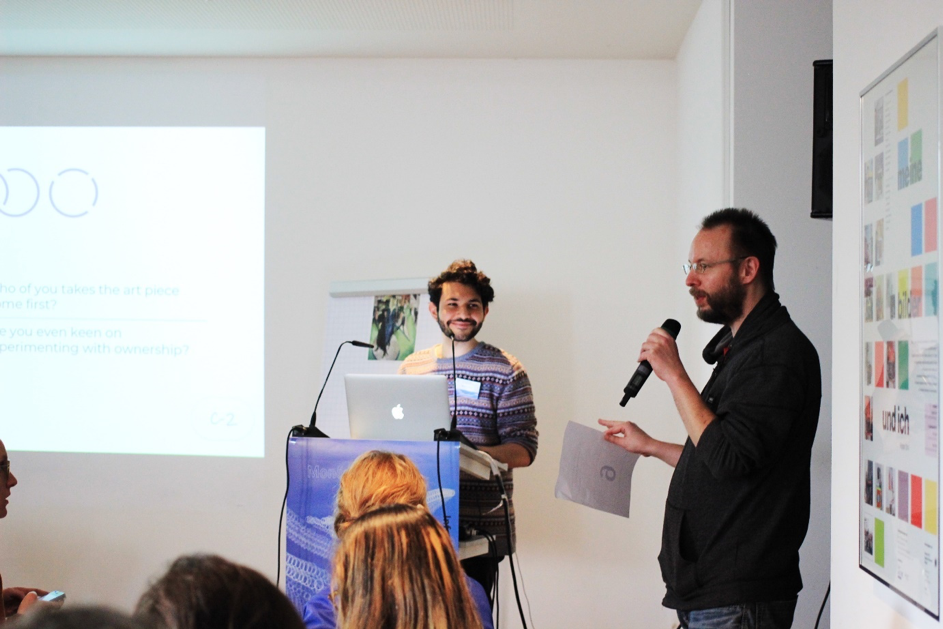 As the session has shown, discourses and practices of Aesthetics of Financial Flows remain an highly relevant issue to artistic, activist as well as scientific projects. Observing where the projects go in the future and seeing new ones arise, is something truly exciting to look forward to in the future speculations and practices of infrastructures of money.