The panel ‘Blockchains Beyond Fintech’ was moderated by Ronja Trischler. As an introduction, she gave a short insight into the topic and her own research. In addition to the application of the cryptocurrency, there are already other exciting and interesting areas in which blockchain technology is gaining attention. For example, for plagiarism or climate change, in short: Blockchain for good.

The use of the blockchain technology is also a question of infrastructure and methodology. This technology can represent an infrastructure, for example for money or cooperation. In her own research, she asks herself various questions: Who do you talk to or where do you go to? She conducted several exciting interviews and gained insights into various blockchain projects. Among them are projects that want to develop an alternative cryptocurrency, tokenize the German energy market, offer timestamping services or offer applications in the fashion industry. The communities around the blockchain technology vary as well. Ultimately, several research questions remain unanswered, as there is no uniform understanding of community and decision-making there. Just as impressive is the problem: How does blockchain enable cooperation?

The first talk was by Emanuele Braga, an artist and researcher. He talked about three use cases for how to build an ecosystem infrastructure, in which he gained his experience. At its core, he is concerned that the paradigm of redistribution of wealth is collapsing. On his chart, it is clearly illustrated that different economies have different values accordingly to which they act. Mainly, there are “Data Trade vs. Open Data” and “Distribute Access vs. Controlled Access”. This is exactly what the presented use cases address: Commoncoin and Faircoin. In particular, the community surrounding the Commoncoin project has intensively investigated the question of “what is value”. There is no concrete answer, but rather human characteristics, e.g., “take care of relationship” or “activism”. So you can pay coins in this community for maintenance, production, activism, assembly, etc., or buy goods/services instead. On top of it, everyone who is creating and adding value to the economy receives a basic income (in Euro) by the organization.

While Faircoin is global, Commoncoin, as the name suggests, is local – that’s the main conceptual difference. In the Faircoin concept every member of the organization has equal voting rights and it is applied as a consensus proof-of-cooperation instead of the proof-of-work consensus – that sounds exciting. The price of the coin should also remain stable, which is why it is not proposed for cryptomarkets.

Emanuele Braga also discussed the connection between new technology and the social body. As Narziss is looking into his water mirror on the slide, Braga linked the saga to today’s obsession with selfies. The becoming human of the machine vs. our becoming machine as a social body, was a final provocation and material for the conversation that followed. 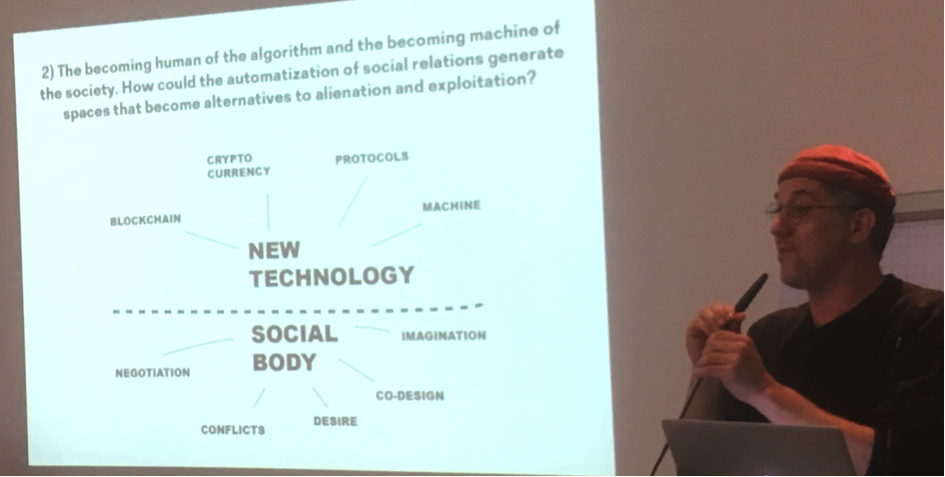 In the second talk, Martín Nadal and César Escudero Andaluz presented a variety of art projects about blockchain technology. Both have already collaborated on several projects and published a paper on which this talk was based. First, they described the blockchain technology, in particular, the aspects of mining, critical mining and the mining process as a whole, which were underpinned by various visualizations and graphs. This quickly made it clear how much energy the use of the Bitcoin or its mining process consumes. Or rather: wastes. The professionalization of the mining process was very clearly demonstrated by both of them. “How can artistic practices explore and expose capabilities, limits, and potential dangers of blockchain technology?”, the researcher artists ask. 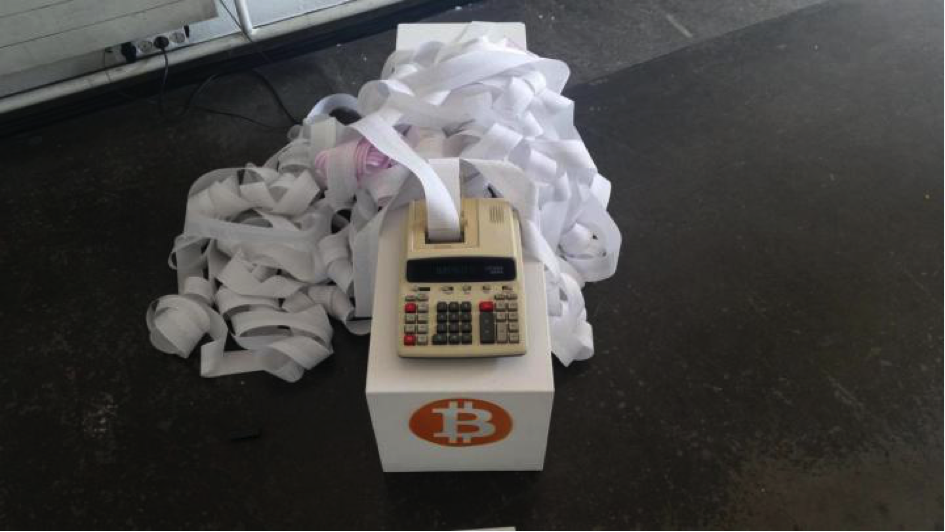 The latter project, BitterCoin, was a project by the two speakers themselves. They modified an old calculator and gave it the ability to mine Bitcoins. The generated output, printed on paper, is immense – if a mining process would be done thoroughly. Apart from the fact that this would probably last over 11 million years. The art projects ought to provoke reflection. Is such a waste of energy essential to use new technology? Are there any applications that justify such a waste of energy?

Talk #3 Object-Oriented Scarcity as a Technology of Governmentality

Oliver Leistert is interested in the critique of blockchain technology. He is a postdoc researcher currently interested in social media, protest media and affective media at the University of Lüneburg, Germany. One of his favourite examples is the blockchain use case of the German asylum process. Leistert points out, if something goes wrong with this particular blockchain, people can simply use a fork to repair this maybe or let the application go (back) into another direction. A fork just starts a new copy of the blockchain with a new direction and does not repair or change the actual blockchain’s data. It is somehow another version and a new blockchain (application). So, the blockchain community creates a new type of hackers and programmers, because blockchain needs a different style of coding. He also wonders why so much money is invested in this technology and its community? All parts of the technology aren’t new, but it’s now called blockchain. So, why are there ICOs with over 1 billion dollars? (e.g., Telegram ICO with 1.7 billion dollars)

Currently, there is the internet of web, of value and things. Bitcoin comes from below, as an alternative to the actual platformization of the internet, with its own rules and payment structures. And here, the simplicity of the features of blockchain makes it so interesting, the quality of identity in its simplest form, pure identity. On his current slide are just those words: “NEW! The cheap mass production of digital identities. NEW!”

Blockchain’s data is of a different kind; it comes with a new and own governance. Tokens are single objects in the blockchain, e.g., for identification or identities. Another slide showed up: “NEW! Generic scarcity enters the digital! NEW!”

Oliver Leistert and his minimalistic slide.

With the introduction of smart contracts, blockchain technology brings up a new constellation of monetization. Smart contracts are the tools to power up. Governance, an executive form through smart contracts. Maybe, those smart contracts could be the missing link between the internet of things and artificial intelligence? In the end, blockchain and smart contracts resonate well with the sharing economy. It can objectify and could maybe secure the order of relations and control…?

Sarah Friend and Saraswathi Subbaraman gave the last talk in this panel. Their backgrounds are in software engineering, design, journalism, and art. Both were already active in the blockchain scene before they came together for this project, and as they said with a smile, they come from blockchains heart of darkness. In this talk, they wanted to present us their project: Circles – a basic income build on trust and powered by people.

It is an open-source project with an intercultural team behind it, targeting one problem: Money is not working for many people.

But, what is Circles? It is a complementary currency, build on top of the Ethereum Blockchain. It is an unconditional currency build on who you trust. It is a marketplace for opportunities to be an entrepreneur. It is people-powered money, based on people, local networks, trust, mutual design and circles. Its goal is inclusive decision making.

Every person in the circles system is launching their own currency (e.g., Bob launches the BobCoin). They make trust-connections to other people who they know in real life: Trust connections allow direct transactions and trust connections mitigate risk. It is a web of trust. Hence, the transactions are based on trust and for supporting trust in the network, Circles want to include so-called ‘trust validators’ in it.

Saraswathi and Sarah explaining how validators can provide more trust.

Two other aspects are issuance and demurrage. The level of issuance and demurrage are set by the community through a democratic process. As there are already similar (non-cryptocurrency) projects out there, they want to learn from them and learn for themselves to come up with new ideas and solutions. For governance, they planned a “soft governance” and not a Decentralized Autonomous Organization (DAO). Starting with in-person meetings (seasonal councils) and developing a formal governance process in collaboration with their early community.

Circles is going to pilot in Berlin this Summer (2019): Co-creating a new economy. Opening their Café that accepts circle coins (cc): “Café Grundeinkommen” come by! While the project is open-source, also their research and data (qualitative and quantitative) will be published openly in 2020 (planned). So, everyone who is interested can learn from this project, but can also take part and get involved.