Art was the protagonist of this fifth session of MoneyLab #7 offering new and exciting perspectives for the potential futures for our digitized world.

Presentations and bios are here. 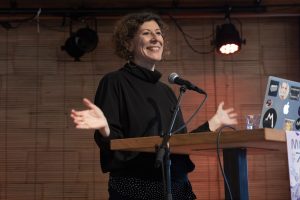 The interdisciplinary artist Stephanie Rothenberg started her presentation by framing the issue in a historical perspective, tracing the evolution of intertwined fears of man-made ecological disaster and alternative visions of finance. Mainstream economics has been concerned with the issue for centuries, from Malthus to the Paris Agreements. But there’s also another, more radical, way of framing the question: works like The Limits of Growth (1972), Small is Beautiful (1973) or the more recent Ecosystems and Human Well-Being (2003) have presented visions of the economy based on human and ecological needs, at odds with capitalism’s obsession with growth and productivity.

Re-discovering these perspectives is particularly relevant to our current context. Since the 90s there has been a plethora of initiatives seeking to use financial tools to address Global Warming. The concept of Carbon Credits was the most noticeable output of this endeavor. However, all of them have more or less failed. The EU Emissions Trading System is a good example of this. A tool launched in 2005 with all good intentions but that generated a speculative bubble that would crash during the Subprime Crisis.

The recent growth of cryptocurrencies has led to a new Golden Age of micro-financial solutions seeking to address Climate Change through individual gestures. For instance, Ben & Jerry’s launched a campaign selling a small part of a carbon credit with each ice cream. The credit was then used to reforest a Peruvian jungle through a complex set of operations rendered possible by blockchain technology. But the question remains over whether this is a true solution for our current climate crisis. As Rothenberg pointed out, maybe it is time to turn back towards other economic models, rather than make blockchain the solution to all our problems.

In the second talk, Eric Barry Drassin encouraged us to think pragmatically about art ownership in the 21st century. 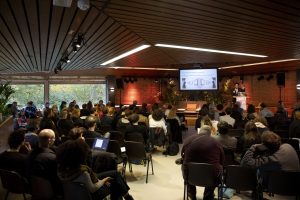 Drassin is a research-based artist, but he didn’t come to Amsterdam to present artwork. He came here to give us an overview of something that may be at odds with the spontaneous creativity of art: a legally binding contract. More precisely, he put forward a new protocol that can be used by artists to keep control of their work as they navigate the different stages of the art market.

The Distributed Art Object (DAO) framework is a protocol seeking to redefine notions of art and property in a collectivized environment. Its main output is a type of contract that allows artists to preserve a certain level of leverage over the way in which their production is used in digital spaces, ranging from private collectors to public institutions. Incidentally, this protocol would also allow for a better archiving policy in regard to digital artwork, taking into consideration the piece’s original technical specificities and whether or not it would make sense to update it as technology evolves.

By changing the rules of property in a globalized and digitalized art market, Drassin also hopes to create the conditions for the constitution of “Soft Unionism” among artists. What is Soft Unionism? Well, in the United States, anti-trust laws have been widely used to crack down on any type of political organization among autonomous workers. Enforcing DAO would give artists a space in which they could enforce collective bargaining without being crushed by anti-union laws. A new form of ownership for a fairer future.

Antonia Hernandez shed light onto the most extreme aspects of platform capitalism through an analysis of Chaturbate. 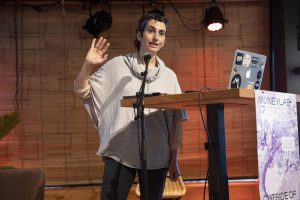 The Chilean visual artist is currently pursuing a PhD in Montreal and preparing an artistic performance on the online sexcam platform Chaturbate. Chaturbate is a free platform based on user-generated content with minimal provision for performers and no contract whatsoever. Anybody can do a live stream and users can watch free of charge. The only way the performers can be remunerated is by persuading their audience to tipping them a form of virtual currency, un-imaginatively called “tokens”.

But the most interesting aspect of Chaturbate is its political economy. Users can buy 100 tokens for $10 but tokens don’t have the same value for performers, who only get $0.05 per token. Chaturbate keeps 50% of the profit generated by the sexcamers. Moreover, it purposefully exploits the marginalization of sex workers by only allowing for two token withdrawals each month, refusing to work with major credit cards or using bitcoin etc.

Chaturbate is an extreme example of platform capitalism and, like all extreme examples, can be useful to understand the underlying assumptions and practices behind the subject of matter. As Hernandez pointed out in the Q&A, it is unlikely that any other platform could exploit its workers as much as Chaturbate. Whether this is relieving or worrying will be left to the readers’ judgement.

Finally, Aude Launay asked how digitalization and blockchain could change decision-making process in the art world 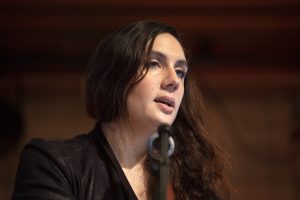 As curator and independent writer, Aude Launay has her hand on the pulse of the art world. Launay has worked extensively on the relationship between social media algorithms and art curation, which led her to wonder whether digital spaces could change the way in which the different actors of the art world take decisions. Two artistic projects have explored different paths of this question.

The Jonas Lund Tokens were created by artist Jonas Lund. The principle is quite simple: anybody who engages commercially with Lund’s creations (either by buying his art, inviting him to exhibitions, featuring his work in articles) receives a number of tokens. These tokens can be sold and give the owner the possibility of voting on Lund’s next career moves: he presents a series of choices and the token-holders decide which is the most appropriate. The more successful Lund is, the more value the tokens have.

Decentralised Autonomous Kuntsverein (DAK) took a different approach to online shares. This immaterial organization gives tokens to their collaborators in relation to the amount of effort and contributions that they have put into the project. Much like in Lund’s case, the tokens are used to democratically decide the organization’s next moves. Yet, unlike Lund’s project, the DAK does not offer pre-selected options: the contributors could change everything in the project, as long as the successive votes follow the procedure. Although the DAK approach might seem fairer, Launey noted that their policy might also favor the establishment of technocratic governance, where only those who can contribute are allowed to make decisions. Despite their differences, Lund and the DAK raise one important question: who is making the decision of making a decision. 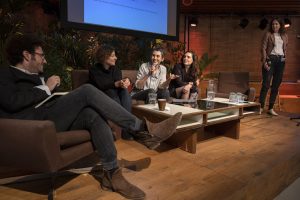