Lana Swarts argues that if national currency represents liberal democracy, and Bitcoin represents some combination of techno-libertarianism and anarcho-capitalism, then Libra represents Silicon Valley feudalism. Andrea Fumagalli historicizes the liberalization of the issuance of money all the way up to today’s attempts to financialize sentiments, and Valeria Ferrari discusses what remains of the dream of peer-to-peer, decentralized platforms in light of Libra. Rachel O’Dwyer talks about a little discussed line from Libra’s white paper in which Facebook states its interest in developing an open identity standard.

First, the moderator, Nathaniel Tkacz, introduced the topic of this session: Payment Platforms. 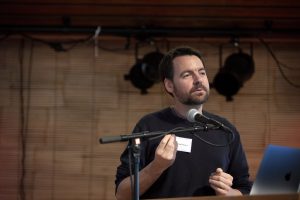 For most of the major online companies, the platform business model was introduced after the companies started their operations. Nowadays, other sorts of industries have platform aspirations as well. These platforms are complex forms of intermediaries, introduced to generate new kinds of market arrangements. Platforms are sovereign-acting and market-making, for them platform payment seems to be a natural next step. However, several questions arise; What will become of these platform dynamics? How do they operate? What strategies will they incorporate?

Payment brings in all the other relationships, infrastructures, behaviors, and meanings involved in money. It also lets us think about instances where money is used in non-market ways.  How would you like to pay? How should we like to pay? Nathanial discussed a very early book about platforms, called: Invisible Engines: how platforms drive innovation and transform industries, by Evans, Hagiu, and Schmalensee, 2006. Furthermore, he explained how French economists argue about the challenge of how to make payments different to something like cash or traditional exchange. An established platform is a kind of vehicle for payment experiments.

Andrea fumugalli – Facebook Libra: Towards a Financialization of the Economy of Interiority?

Unfortunately, Andrea Fumugalli was unable to attend the conference, Valeria Ferrari presented his notes to the audience:

A recent phenomenon is the dematerialization of money, which is “a consequence of the disappearance of any material relationship with a physical unit of measurement”. Crypto money is the joint result of a change in political governance over monetary sovereignty and of a new technological paradigm. In recent years, the process of financialization and the predominance of financial markets have had the task of redefining the hierarchical power structures of money, which is defined as financial biopower. It is theoretically attractive and available to all, without control of the authority. The immateriality of money allows it to be managed directly by the hierarchies of the private capitalist market. Network-value and social reproduction become the new bases for the valorisation of platform capitalism. 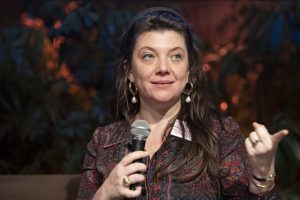 Lana Swarts is a long-time veteran of MoneyLab. Lana argues that all new money forms are dematerialized and that the terms of this dematerialization are incomprehensible to the ordinary understanding of humans. She says that money is actually rematerialized. The example she uses is Libra, which is a crypto currency from Facebook, that seems to have fallen apart as quickly as it came. Libra seemed to be an unstoppable phenomenon when it was merely a theory, and did not yet exist.

The implosion of Libra influences the brand image of Facebook and its partners. Libra was quite amateurish, no one knew what they were doing, there was not a plan in place, and they had a bad vision. Partners wanted to join, not because they were envisioning a radical dystopian, but because they were imagining that it was going to be another corporate blockchain project. Lana calls this phenomenon CFOMO, which stands for the CEO’s Fear Of Missing Out.

Rising from the ashes of Libra is Facebook Pay, another payment system within Facebook. This system is less hyped and operates more by the rules. But this new money form offered through social media will likely be monopolistic surveilled, with traditional structures of power. According to Lana, Libra perfectly represented the evacuation of the near future that resulted in the acceleration towards some sort of eventual dystopian collapse. This temporality is important to understand what is going on with monetary instruments now. We are all interested in how all money projects contain their own vision of the future, and which money form people prefer.

A strange double vision of Libra occurred between millennial Protestantism and modern financial capitalism, which is much aligned with other crypto-prints projects. Lana said: “the shift from the mass money of the state currency will likely be replaced social money media, that looks more like todays social media”. We were willing to believe in the triumph of Libra because we have a failure of imagination and envision a world where capitalism is unstoppable. We need to understand the possible future that Libra is offering. It does not feel like anything other than capitalism, which makes it so dangerous. 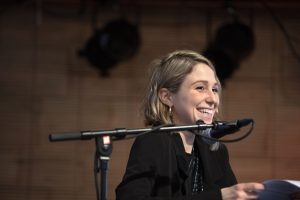 Valera Ferrari came back on stage to present her own work. As a lawyer, Valeria describes herself as a party killer as she looks at the claim and reasons why Libra did not happen. The creation of Libra is a process of negotiation between different entities and how much an authority figure can do without the support of regulation processes. The mission of Libra was to create a global currency, which has power and a natural inclusion of people and is faster than the current speed of global exchanges. By including everyone in an environmental system, Facebook aims to have users never leave the platform. The argument of financial inclusion of countries who do not have infrastructures or payment systems is criticized due to the fact that they then have to rely on the West. Valeria argues that it is a form of ‘technological colonization’.

Another aspect of the payment platform is the intermediation of use of political information. This is similar to social media platforms, which have fundamental enforcement powers. Although their policies are always threatened by regulatory frameworks, platforms decide the content of the policy themselves. With new online payment systems, we have two reasons to be skeptical. First, because such platforms need an actual definition of a legal basis for money. Second, because there is a very complex dynamic between the power exercised by the platform and the power that states can exercise to a platform. Furthermore, regulators and possible consumers generally worry about the privacy of the platforms.

In conclusion, we should have more imagination when creating different monetary systems. Through technologies of money we can create new geographies or sovereignty, and we should not leave this only to the corporations. 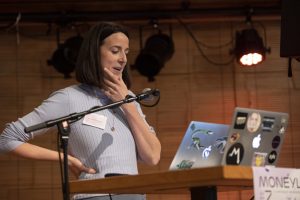 Another MoneyLab veteran was introduced, Rachel O’Dywer. Rachel presented how payment and consumer identity are intertwined and how communication platforms have become payment platforms. New forms of identity emerge as identity acts as trust, an access point, or for financial transaction confirmation. Such identity payment replaces password systems and keys. It is based on the fact that you and your phone become one and create one identity. Therefore, identity is money.

It is interesting to look at Facebook over the years, and look at the changes in the concept of identity, as much has been corrupted. Facebook held different experiments to figure out how identity exposure and payments might be folded together. Self-sovereign identity is a digit movement that recognizes an image that has some kind of controller-agency over their identity online, without intervening administered authorities such as Facebook. John Little’s idea for identity is that “increasingly, our identities are being produced through these different kinds of data points on these social grasps, rather than any kind of staged mechanisms”.

Rachel pointed out that when money is removed, it becomes clear that it stands for trust and identity. This form of monetary transactions is not as necessary as the credentials of people in a community. Josh Lauer has written a book called ‘Creditworthy’ in 2017 about the tracking of consumer credit, spending behavior, and financial status. Cash is an anonymous instrument. The early phases of money involved a contract between named parties and relations. Debt started to function as a medium of exchange. Cash is decoupled from identity in these anonymous bare instruments and this circulation. Now money is recoupled with identity through the platforms. Facebook services seem to be diversifying its business model away from data. This is an interesting shift of identity as a service which might replace data monetization or free long exchanges which concern data. 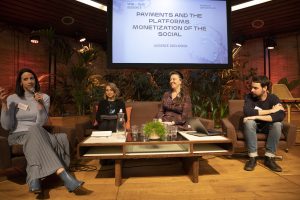 It seems that we do need alternative, anonymous crypto systems that are detached from institutions that we don’t trust. But when main stream adoption is pursued, there are regulatory constraints and identification concerns. Moreover, cooperation is necessary, and most crypto currencies are not interested in cooperation, they are merely digital units of value based on the value of the dollar. At this point they are not an alternative for anything, just another source for speculation. – Valeria

Although there are interesting experiments with alternative authentication systems that do not require a connection to identity, they need further research. – Rachel

The financial ecosystem is optimized to support speculative investments, nobody is interested in the banal, boring work of making a trustworthy, stable infrastructure. It is hard to figure out a good risk model for payment. The platforms that go for scale use a one size fits all model where al risk is just disallowed, and can lead to exclusion.– Lana

We seem to think of technology as seamless, frictionless, and happens by magic, while it actually requires a lot of labor, lots of maintenance, places and raw materials, and is very costly. Sometimes blockchain has the potential to reveal all of that invisible labor and a potential for a kind of feminism, but if it goes into the direction of making things seems more automatic, more magical, it will do the exact opposite. – Lana