Robert van Boeschoten, researcher and lecturer at Hogeschool van Amsterdam and Universiteit voor Humanistiek, was in for his second round at the MoneyLab. During the MoneyLab’s first edition, he presented his Crowdfunding Toolkit (which you still can find on the INC’s website), a useful tool for aspiring crowd-founders to identify the right platform for their campaign (though van Boeschoten admitted it would need to change from a static to a dynamic tool). In this editions workshop, van Boeschoten took engagement with Crowdfunding platforms one step further and dealt with the problem of negotiating trust on these platforms. Being an important but complicated factor to produce, trust is often a key factor for success for campaigns on crowdfunding platforms, but as well for the success of the platforms themselves. Not only does a potential funder need to trust the campaign of interest, but the founders themselves need to trust the platform to provide the right tools to develop a successful campaign.

Backed by van Boeschoten’s insights of his research about this topic, the issue of negotiating trust was then re-enacted, both from a founders as well as from a funders perspective. The result: trust is negotiated through nearly every element of a campaign. Be it the design, be it the amount of friends that back it, be it the tone of the video – the authenticity of the founders engagement needs to be felt real and present through all of this. 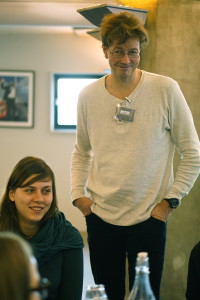 A classic hindrance to building trust is the avatar identity that one adapts when starting a campaign on a crowdfunding platform. Its anonymity might make it difficult to evoke trust in a potential backer or business partner. Platforms have to be made up and used as to embed other social platforms to give the avatar a social and historic (e.g. previously started campaigns) context. One of the most crucial points of the negotiation of trust though is the felt presence of the respective founders. Being visible in the campaigns video might be one strategy, but frequent updates of the campaign which provide insight into the development were identified as being more effective. Van Boeschoten mentioned that e.g. occasional near real-time updates increase the felt presence of a founder and consequently tighten the bonds between the founders and backers. All in all, the different strands of the campaign have to result in an image that is both transparent and predictable to successfully gain trust. 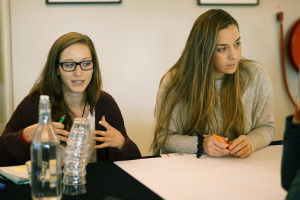 The discussion was eventually drawn towards the imagination of an ideal platform. This platform had removed boundaries of investment (maximized cross- and international payment options) and maximized the possibility of interaction, both giving the funders the feeling of connectedness and being-withness, as well as the founders the possibility to build a sustainable crowd. With this, the question of how to identify a reliable partner on a crowdfunding platform should be less of a concern.