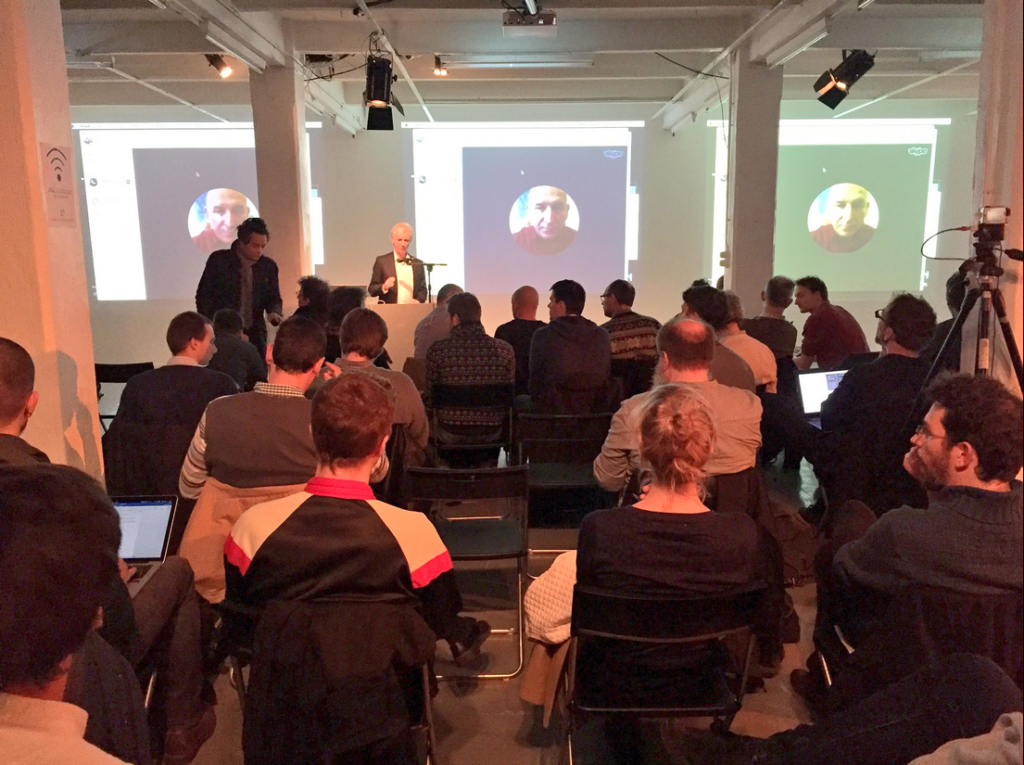 Over Friday 4th and Saturday 5th November Imal – center for digital culture and technology in Brussels – showcased a series of presentations and invited a large number of artists and designers to discuss, workshop and present projects that implement or reflect on blockchain, de-centralized technology and digital currencies. The programme was populated and was split into three distinct sections, the first was a symposium with 9 speakers on blockchain followed by an evening program that showcased over 10 different art projects and lastly the whole weekend was wrapped up with a Plantoid / smart contract workshop on Saturday.

Michel Bauwens and Alex Pazitis from the p2p foundation kicked off the symposium, providing a brief history of accounting and Pazitis examined how different types of value have become representative of different types of economies. He suggested that double entry book-keeping (introduced in 15th century Venice) was a good budgetary tool for capitalist economies but not so useful for p2p economies. He went on to suggest that blockchain technology can offer alternative ways of distributing value and exchange by tracking supply chains and shifting the value system towards origin and provenance. This would enable economies that focused more on the exchange value than the use value of a commodity and could provide the network infrastructure for more equitable economies. Jeane Jacque Quisqauter followed the p2p research fellows with a technical over view focusing on cryptography and cyber security. Quisqauter went in detail onto Satoshi’s whitepaper and emphasized that Bitcoin was an experiment and is intended to be developed and improved. The presentation included many technical schematics of various cryptographic methods. Quisqauter insists that we are still in a prototype phase and that better models are needed and citizens need a greater education on Bitcoin so they can improve and develop the existing tools. 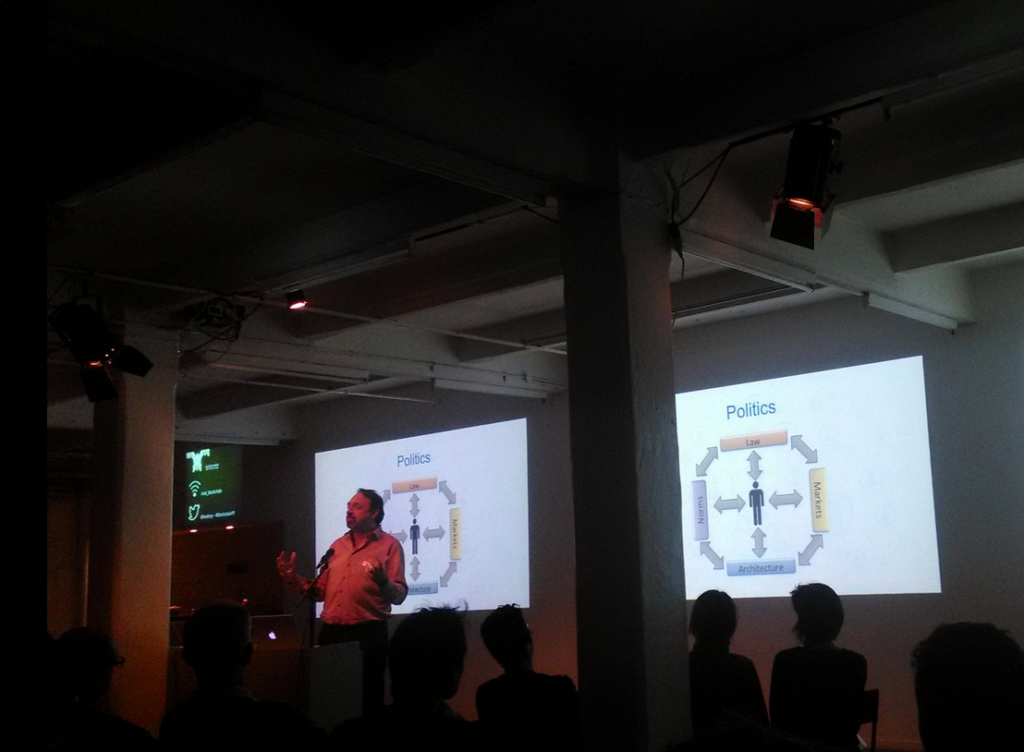 Yves Moreau brought a distinctive reflection on blockchain commenting on how interactions and networks are dividing politics. His presentation reflected on certain blockchain features and relayed them back to social, political and historical developments. He tracked the “code is law” belief of ethereum community to Laurence Lessig in the early 90s, He also showed a short video of Milton Friedman explaining how something as simple as pencil could only be constructed through the extensive production of force of globalized free market. He was also the only other speaker (excluding myself) to draw parallels between the libertarian belief in the free market attached to the bitcoin community and the problematic assumption that these ideas are more democratic or egalitarian.

Jaromil from Dyne presented the D-cent research he has been doing collaboratively over the past three years and as always offered some more engaging tech projects that they have initiated with different communities and people’s political parties. Without going into too much detail he briefly mentioned the social proof of work concept D-cent used in FreeCoin, and credit mitigation to enable more transparent accounting and risk assessment. While some of the actualities of their toolkit are still hazy D-cent still showcase the most engaging research projects in blockchain, crypto-currencies and de-centralized governance. Continuing along the path of community empowerment Roland Alton from FairCoin presented the outcomes of their exploration of a community currency on the blockchain. Like D-cent, FairCoin v2 re-designs the Proof of Work (PoW) model used to mine bitcoins and into a proof of co-operation (PoS) model, where co-operative individuals or orgs are financially reimbursed for sustaining blockchain nodes. There are over 50 certified nodes and plenty more communities around Europe using the Faircoin, because it relies on existing social relations it attempts to replace competition with co-operation, eliminate unfair money creation and become “a blockchain for the common good“.

Chris Speed from the Design informatics department in Edinburgh rapidly went through the design methods and experiments he has been co-ordinating for the past year and a half. There is a focus on applied “making & do-ing” in Prof Speed’s approach and it always seems to produce very tangible explorations of alternative value exchange (see previous report from Design and the City) and the latest project showcased at Dutch Design week “Kash Cup” 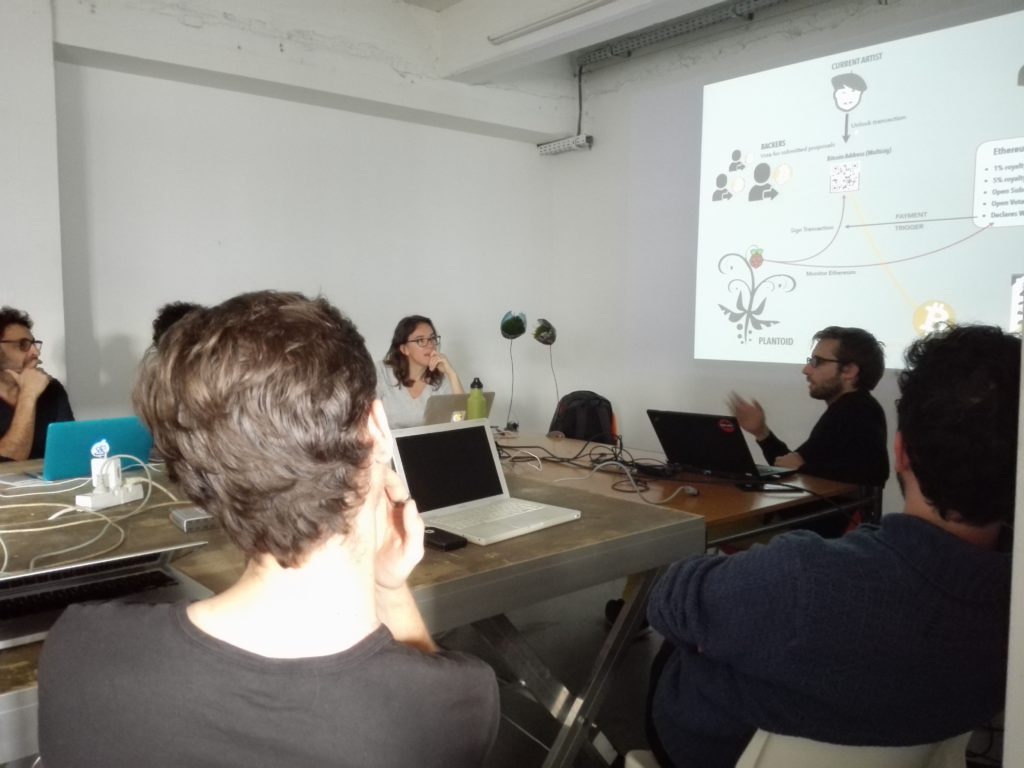 On Saturday Isabelle Humbert-Radtke & Xavier Lavayssière led a practical and engaging workshop using the Plantoid economic smart contract artwork. The Plantoid (presented at Moneylab#2) is an economic agent / interactive artwork developed by Primavera di fillipi’s and Okhaos to demonstrate how an automous non-human agent could become a self-sustaining artwork. The steam punk looking plant is hooked up with sensors and connected to the internet where a smart contract operates its functionality. While the operations it can be perform are varied in this instance the Plantoid wiggles if it receives a donation via bitcoin, to which it then uses to commission new digital art. The economic process behind Plantoid is the interesting aspect of this project and the workshop participants began tinkering with how they could integrate smart contracts into their own ‘autonomous’ artworks. 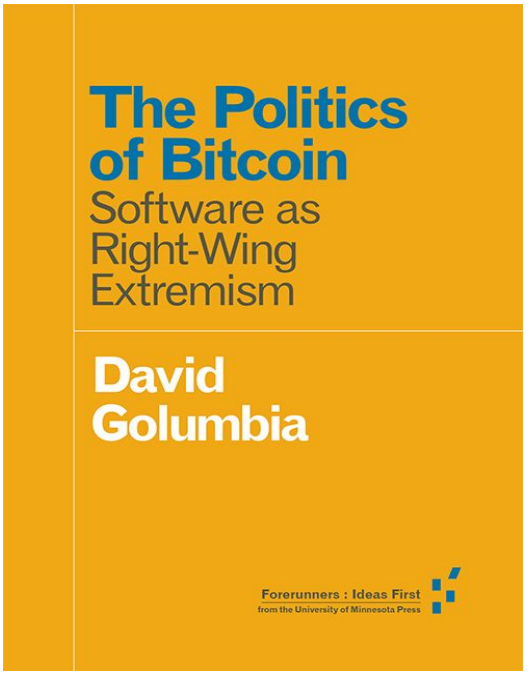 The symposium, showcase and hacklab highlighted the extensive amount of excitement & interest from artists, designers and cultural organizations. It was positive to see such a diverse range of projects, initiatives, start-ups and concepts inspired by and built with blockchain, de-centralized technology and cryptography. Yet in Moneylab’s view there seems to be an extreme and critical lack of understanding about the origins and politics of blockchain technology. In my presentation (How did a transaction technology become a tool for social revolution?) I tried to highlight the political terrain and used David Golumbia’s book “Politics of Bitcoin: Software as Far right Extremism” to highlight the provenance of blockchain. As Golumbia highlights, the political ideas that contributed to the original development of cryptography (that of liberty from the state, freedom from corporate surveillance and destruction of copyright and Intellectual property) are now getting re-introduced with blockchain based applications. Blockchain is being used to store medical information in Estonia, it is being used to by the majority of financial institutions and it is even getting promoted to artists and musicians to help them ‘take control of their work’ by using the blockchain to enforce & regulate intellectual property. This problematic contradiction is rarely discussed and the notion that blockchain is somehow radical, anti- authoritarian or alternative is leading a generation of creatives down a gloomy path. The popular and contagious anti-authoritarian attitude is guiding our activists, programmers, artists, designers and businesses towards a common universal view that ‘de-centralized = good / centralization = bad”. There are many reasons why a network theory metaphor is not good enough for a new type of politics. 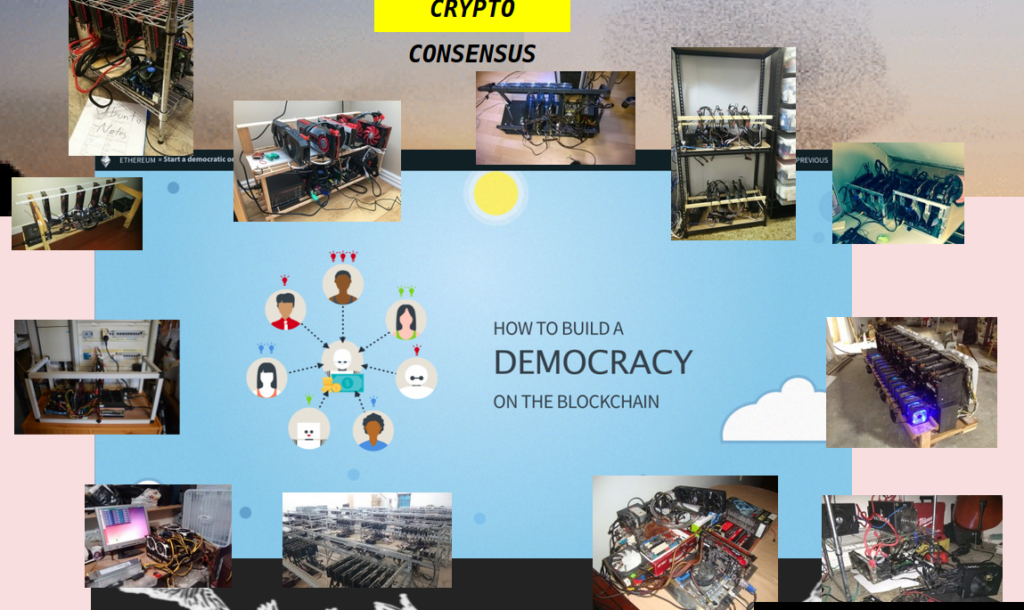 While bitcoin was at least focused towards “the banks”, blockchain and the applications built on top of it (Backfeed, Ethereum, Consensys) assume that because the technology is de-centralized and unregulated it is therefore an improvement on existing social and political system. While there are projects demonstrated at Imal such as FairCoin and Dyne’s democracy tools that do present potentially empowering civic uses of blockchain that promote working around the libertarian crpyto-logic , they do this by explicitly taking out or adapting the PoW mechanic to substansially alter how value is produced and distributed, rather than copying the same competitive “bigger CPU bigger voice” of bitcoin mining. This unfortunately is not happening often enough and many initiatives quickly integrate blockchain technology without examining how the code will enforce a libertarian metricocratic reward system rather than offer sustainable solutions to economic inequality and consequently end up just expanding an unregulated network formatted towards hyper capital that will burn a hole in both your pocket and the planet.  I am surrounded by artists/designers and activists who want to code economic “smart” contracts into their projects with the belief that self-executing transaction technology will enable greater autonomy, freedom and civil liberty. Smart contracts, DAOs or Turing complete code appeal to young, radical crowd because of their ‘anti authoritarian autonomy” but often led to whitepapers, objects and scenarios that are more akin to a Deuleuzian society of Control rather than a libertarian promise of civic freedom. The unfortunate twist is that eventually, once smart contracts are eventually embedded into IoT and turn all objects into autonomous economic agents, the hackers and designers will have contributed to an even greater surveillance state, that can utilize the infrastructure of connected devices to enforce and control society with self-executing open source code.  The diminishing ambition of engineering counter-cultures with technology stems from a broader  failure witnessed in cyberculture from the early 90’s to the turn of the millenia, to effectively produce a networked unregulated utopia beyond corporate or government control. Turning flowers and other natural resources into autonomous agents that can execute transactions and will wiggle for a small bitcoin donation is more reminiscent of a sci-fi nightmare (see Philip K Dick’s Ubik) than a liberated utopia. When you consider how the motivations and political values have migrated from cryptography to bitcoin to blockchain the promise of a de-centralized transaction technology to empower citizens to form self sustaining communities becomes nonsensical, not just questionable.