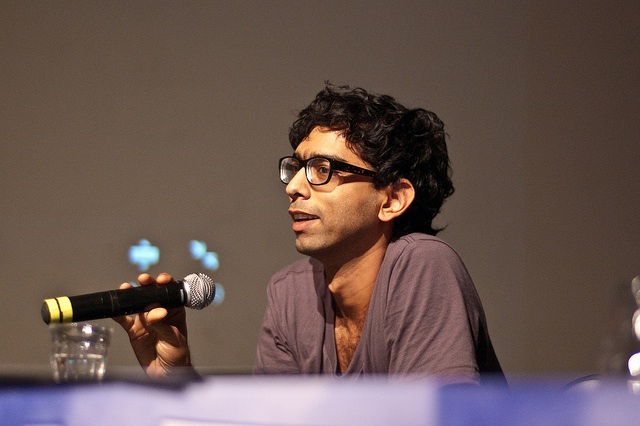 Ashiq Khondker and Eugene Kotlyarenko’s presentation was the most entertaining and confusing of the first day of Video Vortex #6. To begin with, their collaboration took place exclusively on the internet, after Ashiq contacted the artist to interview him about a series of videos he shot entirely with screen capture software and published online as a sort of mini-series entitled ‘Instructional Video #4: Preparation for Mission‘. To match the spirit of Kotlyarenko’s pieces, the interview – or the attempts to get it done – were recorded with the aforementioned software and edited into a narrated, self-presented documentary. That is to say, there was no usual speaker-behind-a-laptop combination, but a fullscreen projection of the clip.

Called The Diegetic Desktop, this video showed Ashiq trying to interview an arrogant and downright obnoxious Kotlyarenko via iChat and Skype, while switching between notes and Web browser windows or sharing his screen with the American artist. As the video progressed, it seemed there was no way to deal with Eugene, annoying and uncooperative, lazily slouched on his sofa with a giant bottle of water and a couple of mysterious green pills that obviously didn’t cure his delusions of grandeur.

The apparently failed interview had a big impact on the audience, who became very engaged, asking questions or even calling Kotlyarenko an ‘a**hole’. But then a surprising revelation was made: the whole video was set up. When Sabine Niederer, managing director of the Institute of Network Cultures, complimented Ashiq on his patience in interviewing such a difficult character, he confessed that both he and Eugene had been faking it all along. Ashiq said that playing the goofy guy came naturally to him, while Eugene took on the role of the arrogant artist.

It was not just an entertaining presentation, but an actual piece of video art that, rather than making sweeping statements about the future of online video, showed how diegetic desktop works play with software and our minds.