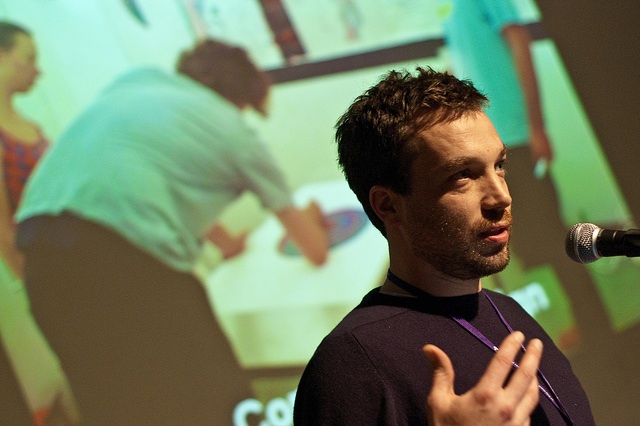 In his presentation on online video art and the design of fluid digital environments, graphic designer and project director Roel Wouters introduced the audience to interactive projects which include dynamic media such as web video and animation to install crowdsourced performances. With his collegues Luna Maurer, Jonathan Puckey and Edo Paulus he has published the Conditional Design Manifesto, which is based on the work of his collective called Conditional Design and emphasizes the idea of following processes in the digital realm rather than its products.

In their work, Wouters and his fellow group of designers focus on the increasing blur between consumers and producers which comes about as a result of web technology enabling user participation in the creation of online video art. Roel Wouters presented two projects that are based on users taking part in the installation of a video, one based on people taking pictures of themselves with a webcam, prior given the instruction to resemble a particular frame and one based on creating a video, resembling a particular scene or act.  As if to say “If I would be the director, you would be my actors”, these projects are based on collaborative story-telling in creating online video art which participants can share with their friends online.

“It is surprising how these projects result in really beautiful photography. People are not self-conscious when resembling the frame which they are given and that is why they appear very natural” stated Wouters when presenting the two projects “One frame of fame” and “Now Take a Bow” to the audience. His collective Conditional Design was recently involved in the 5days off festival in Amsterdam with a project based on an iPhone application which Routers calls a ‘social photo toy’, resembling ‘the ultimate amateur photo’, which is people taking pictures of themselves in front of a mirror using flash.

Here is an illustration of the ‘One frame of fame’ project: