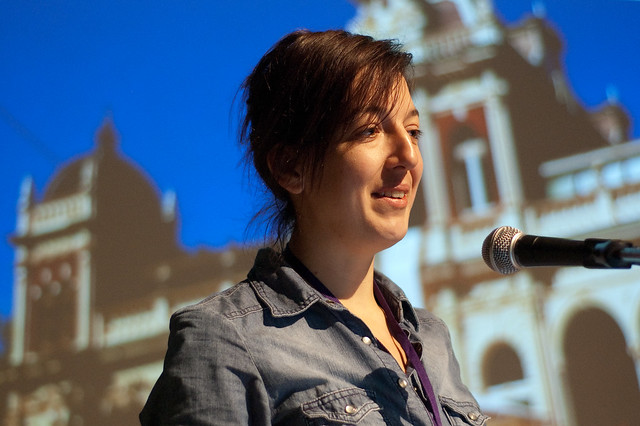 Annelies Termeer was the third speaker during the lecture themed It’s Not a Dead Collection, It’s a Dynamic Database. She is ad interim head of digital presentation at the EYE Film Institute, formerly known as the Film Museum. The project she is affliated with is called InstantCinema. The goal of the website is to facilitate filmmakers with a platform that affords them to easily upload their films and connect with likeminded people. An important part of the target audience exists of experimental filmmakers, who now have a platform that has the ability to unite the separate spheres of the online communities, the art world and the film world.

The key subject in the overarching theme was that the preservation of works online offered a way in which the curators could add value through contextualizing the artists and their artwork, which is supposed to lead to a richer experience for the public engaging with those works. Furthermore, in the case of InstantCinema, a big factor in the succes was the establishing of a trusting relationship between the artists and the organization. The filmmakers would be offered an easy-to-use platform. As Termeer explained, InstantCinema wanted to make film widely available providing a complementary platform towards existing establishments such as the museum, specialized film festivals and cinémathèques

Termeer explained that the project came about through the shared inititiative of L.A. based Dutchmen Rene Daalder, who is a writer and filmmaker, and Folkert Gorter, and interaction designer. The technical framework, the content management system of the project, originated in a few of their earlier projects, namely SpaceCollective.org, a cross-media platform where the future of human existence is being discussed and CargoCollective.com, which functions as a platform on which graphic artists can easily share their work.

In Termeer’s view, InstantCinema has the important socio-cultural function to show the similarities between different forms of media-art. The site, located at www.instantcinema.org, has several features with which it tries to provide a quality alternative to commercial distribution platforms. It offers a high image quality and a solid content management system. It also has a feature that enables communitybuilding. As you can see on the image below, the left of the website exists of curated works, and the right side offers contributed work by artists:

After describing the website, Termeer expanded on what challenges the creators faced. One of the obstacles that arose, was that it was taking far more time than expected to finish the platform. Besides that, there were the usual problems surrounding intellectual property rights with curated works. They also had to adapt the Cargo systems, making them able to house videomaterial. As Termeer explained, much consideration went into which format was being used, keeping quality standards and such in mind. Video would have to be streamable, while the works would retain a high quality.

She went on to point out that, in order to grow organically while at the same time maintaining a high standard for the artwork that would be submitted, InstantCinema would use invitation models for the filmmakers, like Google used them for Gmail. Every artist would be allowed to invite 5 other artists, thereby granting them a degree of control over the content on the site. Moderation would therefore be a shared burden for the community and the owners.

Looking ahead, Termeer sees several further goals. She points out that the aim of the project is to establish an even closer connection between the site and other offline events that are being organised by EYE. InstantCinema seems to celebrate the openness and connectivity that the web has to offer. The question remains how big its repository will become. By granting an accessible platform to experimental filmmakers, and taking away the obscurity of the ‘art-film’ by offering the public 24/7 online access to this valuable resource, InstantCinema seems eager to see what the future holds in store for it and how big the community will turn out to be. The project is still in its early days and over time we will see if the caterpillar will gloriously emerge from its cocoon as a butterfly, or if it will remain modest in the safe surroundings of its protective shell a little while longer.